On Monday, the jury heard Pedro Bravo’s voice for the first time.

Bravo has been an otherwise silent spectator to the now six-day trial. He is accused of the first-degree murder of his friend, Christian Aguilar, among other charges.

One of which was lying to police, a charge the state focused on today by showing the jury three video interviews of Bravo.

The first took place early morning on Sept. 21, the day that Bravo and Erika Friman, Aguilar’s girlfriend, reported him missing.

He’d been battling them for four years, he said, but recently they’d gotten worse.

“He’s gone through the same thing, and I knew he’d be there for me,” Bravo said.

The pair were set to meet at the UF Hub at 2 p.m. on Sept. 20. Aguilar was late, Bravo said, so he picked up a coffee at Starbucks while he waited.

When Aguilar arrived at 2:30 p.m., the pair walked to the Student Health Care Center to check out a small piece of graffiti Bravo had painted. It was a small alligator next to the word “chomp.”

Aguilar used the time to get a flu shot while Bravo waited outside. He was afraid of needles and squeamish around blood, he said.

They drove to Zaxby’s, where Bravo got a lemonade and a Nibbler. They stopped at Best Buy, where Aguilar bought Kanye West’s new album “Cruel Summer.”

Then they drove around, Bravo said. They picked up a hitchhiker, who Bravo described as a very tall, “gentle giant” in his mid 50s. He had a white beard and a cowboy hat, and he wore a sweat-stained T-shirt, khakis and white sneakers he stepped on the backs of.

The hitchhiker had come all the way from New York state to marry a woman, but “he caught her in her panties with beer and another guy,” Bravo said.

After they dropped him off in a storage unit parking lot, the boys went back to discussing Bravo’s depression.

”If I die, everything stops happening,” Bravo said.

“You can’t look at it that way,” Aguilar told him.

“You don’t know what I’m going through,” Bravo replied.

Then Bravo said he got annoyed. He wanted to push Aguilar’s buttons, so he brought up a failed relationship with one of Aguilar’s high school crushes.

Bravo left him near Home Depot on Northwest 13th Street with his backpack and cell phone.

He picked up McDonald’s, drove around a bit to clear his mind, then took four sleeping pills and “knocked out” for the night.

“Part of me just wished I could take four sleeping pills and knock out forever,” he said.

He woke up around 3 a.m. to charge his phone. He had a brief conversation with Friman, who called him because Aguilar still hadn’t returned to his residence hall.

When Wilder asked Bravo’s opinion about Friman and Aguilar’s relationship, he said he trusted Aguilar.

At this point, the interview ended and the search for Aguilar continued.

Bravo, meanwhile, had a noontime interview with GPD Detective Randy Roberts, who would go on to become the lead detective on the case. Their interview lasted four hours.

Roberts asked Bravo what he had to be depressed about. Bravo mentioned the difficult breakup with his ex-girlfriend, Friman, and his disappointment at attending a community college instead of a university.

“And then my friend goes missing, which is great. It’s fantastic. It just adds on to everything,” he said.

They picked up the hitchhiker around 4:30 or 5.

Their argument was verbal, and it was mostly each trying to outtalk the other.

After dropping off Aguilar, Bravo was too upset to eat, so he just got a Dr. Pepper at McDonald’s. He remembered walking inside, he said, and that it started raining right after he left Aguilar.

He got back home and messed around on his laptop — Facebook, Tumblr and a game called “Atom Zombie Smasher” on Steam.

Bravo was still “really heated and annoyed,” so he drove around to clear his mind. He talked to his parents on the phone before heading home to take the sleeping pills at 8 p.m.

He dozed off until 3 a.m., when he briefly awoke to charge his phone. Friman called him at 4:15 a.m., he found on his phone. They spoke for 26 minutes.

“That’s when I learned he didn’t make it back to his dorm,” he told Detective Roberts.

The next morning, he searched his car for Aguilar’s phone. That, he said, is when he noticed his duct tape was missing.

At this point, Detective Roberts confronted Bravo with the receipt found in his car, showing he purchased a Big Mac value meal and a Dr. Pepper at 12:55 a.m., through the drive-thru.

Bravo blamed it on the “midnight munchies” caused by the sleeping pills.

“I might have gone out to get something but I don’t remember exactly,” Bravo said.

Detective Roberts asked him if he had thought about hurting himself today.

Bravo detailed all the ways he’d considered taking his own life: a loaded Colt .45 caliber revolver at his parents house, a bottle of pesticides filled with sleeping pills, slitting his wrists or intentionally swerving into traffic.

“If you think about it without the morbid sense, they’re all really interesting,” he said.

His friends took away all the blades in his house the previous week, he said.

Right as the interview was about to wrap up, Bravo told Roberts he had something to get off his chest. He hadn’t just verbally argued with Aguilar; he had punched him in the face.

Bravo had thrown the barb about the ex-crush, and Aguilar told him “maybe you should just f*****g kill yourself.”

“That’s when I turned around and punched him square in the face. Then I made him get out of the car,” Bravo said.

He insisted that it was only one blow to the face.

“It was just one punch,” he said. “Kind of like a punch that just means stop.”

Then Bravo and Aguilar’s phone records were brought in. They showed that both phones had been stationary near 13th Street between 4:20 p.m. and 6:30 p.m.

Then, someone took Aguilar’s phone over to Archer Road and Interstate-75. At 7:20 p.m., it was manually shut off.

Roberts warned Bravo to tell the truth, or “all these lies are going to make you look like you’re guilty of first-degree murder.”

Bravo agreed that these statements wouldn’t hold up in court, especially if Aguilar was found in the woods a few days later, as Roberts put it.

“I don’t want him to be found as a skeleton by his parents and not have a funeral,” Roberts said.

Bravo then said he had kicked Aguilar out, but keeping both his phone and backpack. He correctly identified that Aguilar’s backpack was in Bravo’s closet, where it was later found.

“I turned off his phone. I thought, screw him,” Bravo said. “I’m going to make it really difficult for him to get home.”

He said he threw Aguilar’s phone out the window of his car near Archer, after turning it off.

“Will I still be able to go home with my parents tonight if I… if I..,” Bravo said.

Roberts read him his Miranda rights, and Bravo went on to say that it had been more than one punch.

“I was wailing on him,” he said. “I kept going until I saw he was OK, but he wasn’t getting up anymore.”

The final interview of the day was in a smaller, cramped room. Roberts and another officer began by inspecting Bravo’s hands.

“Those don’t look like the hands of someone who beat someone up,” Roberts said.

Bravo then said that after the single solid punch in the car, he had waited until Bravo exited the car and crossed to the driver’s side. He got out, tripped Aguilar, shoved him and began beating him with his fists, palms and elbows for “10 to 15 minutes.”

“I was aiming more for bruises than blood,” he said. “I get squeamish around blood.”

He left his friend dazed, flat on his back and barely breathing, he told officers.

Bravo had trouble reconstructing his exact times and locations from that night, so officers confronted him with the phone records.

This was the first time Bravo brought up how the boys had parked in the Wal-Mart parking lot for a few hours, near the clothing donation boxes.

He received his call from his dad at 6:23 p.m., while they were both still in the parking lot.

They drove away at about 6:40 p.m. Aguilar had moved to the back seat, Bravo said.

He was leaning forward as they argued, which made it that much easier for Bravo to turn around and punch him in the face at a red light.

“I accelerated the car to make it a little bit worse,” he said.

He drove a little further and pulled an illegal U-turn into the empty lot near Streit’s Motorsports. Meanwhile, he said Aguilar sat quietly in the back seat, in shock.

Bravo made Aguilar leave the car, and that’s when the fight happened, he said.

After he left Aguilar in the rain, he said he went home, bought some gas and turned off Aguilar’s phone before tossing it into a creek.

The interview ended, and Bravo was immediately Baker Acted, which means he was involuntarily committed to Meridian Behavioral Healthcare.

He was released on Sept. 24, then shuttled immediately to jail, where he was booked under charges of depriving a victim of medical care.

On Sept. 28, Detective Roberts returned for Bravo. This time, it was to book him for homicide. 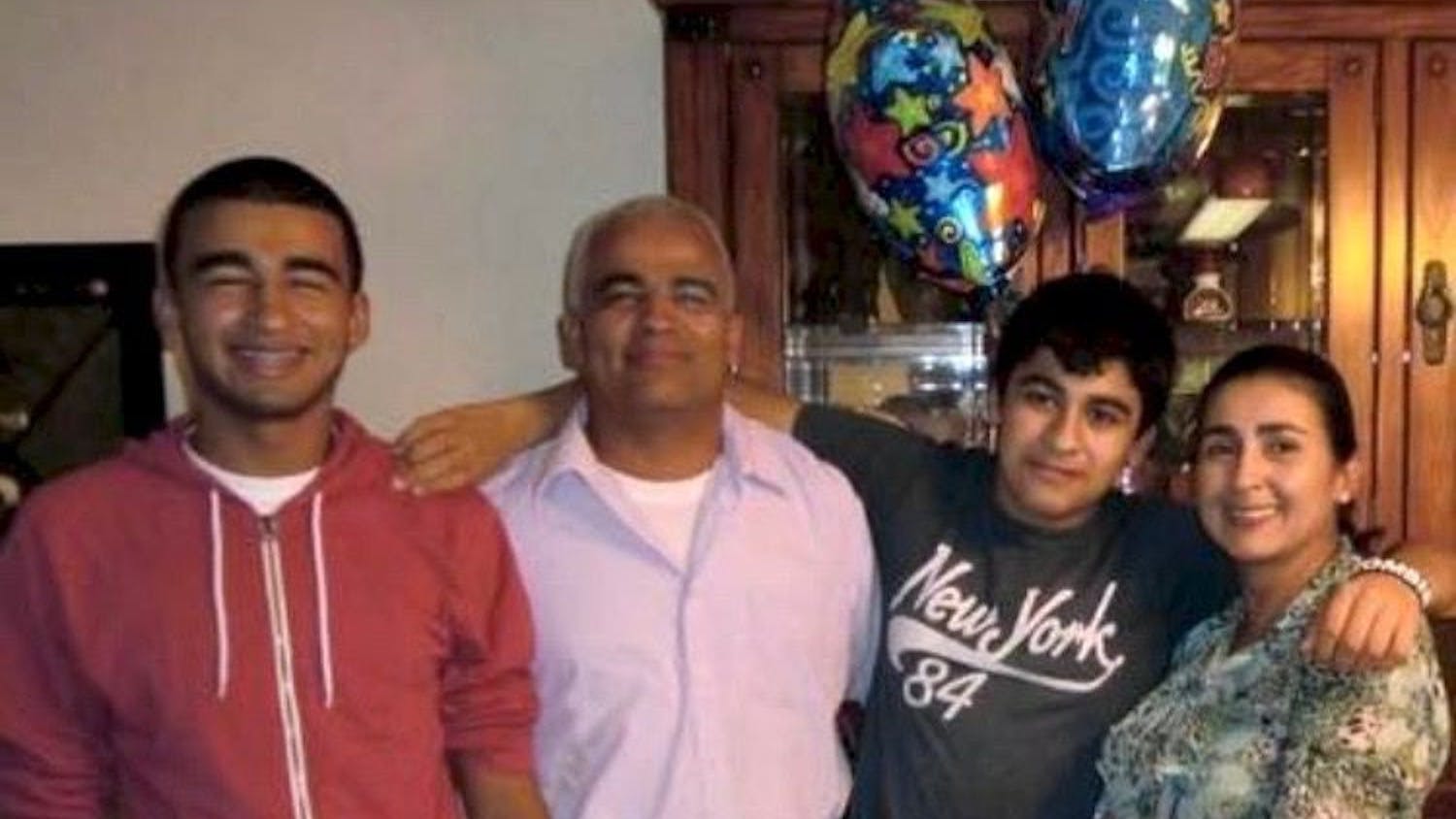 ‘I want to finish out what he started’: UF student carries on brother’s legacy

Letters from a killer: Pedro Bravo's journals, notes and drawings