Every year, wide-eyed freshmen stumble through Turlington, bookbags strapped to their back.

A few steps north, Chem Lab. A few steps south, the McCarty A, B, C and D maze. Google Maps claims CSE is mere steps away, but where is the A101 lecture room tucked?

The campus bustles with the new arrivals and their collective confusion, but welcomes them warmly before the barrage of exams begin.

This year reflects any other year — except scattered faces donning masks. In-person classes, extracurriculars and hangouts spots picked up as if it were 2019 again. Pandemic freshmen are getting a taste of a somewhat normal college life, and sophomores are emulating the freshman year that could have been.

The pandemic gap left students keen to explore, connect and find their place in Gainesville whether through social media, crowded buses or places of worship.

As he crawled in the bulky glass doors of the J. Wayne Reitz Union, Jaylen Thomas’ eyes drifted to every corner. Students filled the building’s crevices in bee-like swarms.

The 18-year-old biology freshman shuffled with purpose to meet new people at a Friday Gator Night. With his close friend Maria Buzaianu beside him, he charged through the flourishing forest of students until they found a group of girls who also wanted to make new friends.

The group chatted the night away until they craved a sweet snack. Their midnight roam ended at Insomnia Cookies on West University Avenue, where Thomas ordered some classic chocolate chunk cookies.

Socializing hadn’t been what Thomas expected at all, and he hadn’t realized how difficult it could be.

“Once I actually got here, I was so nervous,” he said. “I thought I was social and this would be easy, but it’s so different than what I expected.”

His alienation wasn’t all that different from his days at Stanton College Preparatory School in Jacksonville. As a homebody, he mostly kept to himself.

“Back at home, I didn’t really hang out with friends that much just because it’s so inconvenient, almost,” he said. “When your friends are right on campus, you can just go and walk out.”

“I’m Black and church for Black people is so different, but the atmosphere here is great,” he said. “It was way better than what I expected.”

When he attends service on Sunday, he leaves surprised to have learned a new song. Sometimes worshippers rave, leaping with the music and waving their hands in the air. Thomas wasn’t accustomed to the thumps shaking the wooden floors, but he has grown to appreciate them.

In those weekly stomps, he found a community.

Deborah Rodriguez disembarked from her car onto the apartment parking lot. Her mother mimicked her daughter’s steps. The duo exchanged glances for a second.

“What, you’re not going to start sobbing or anything?” Rodriguez asked her mother.

Rodriguez and her mother were like puzzle pieces, filling in what the other lacked. She didn’t display her emotions. Her mother, always full of them.

Her mother’s laughing smile masked the strong wave of emotions brewing. They then said their goodbyes as quickly as they arrived.

The 19-year-old health science sophomore climbed up the apartment steps. Each step led her closer to her future life as an in-person student. Yet before she unlocked her apartment door, she felt an unfamiliar feeling. For the first time, she realized she was alone.

“I closed the door, and I turned around where she's not facing me,” she said. “I literally just started bawling and crying.”

The goodbye had been delayed by a year. Rodriguez decided to stay home to complete her first year at UF.

“My grandpa was alive at the time, and I was really close with him,” she said. “I wanted to stay by him, and I didn't want to come here and then visit back home and get them sick.”

Rodriguez initially disliked her grandfather for always teasing her. They grew close when he moved into her house after his Alzheimer's worsened and a stroke damaged his Broca’s area, an area in the brain responsible for speech.

“It broke my heart to see someone who used to mess with me all the time and be the most heavy-hearted and spirited person really struggle,” she said.

Between online classes and assignments, Rodriguez shared meals and watched tennis and SpongeBob with her grandfather. He offered her anything he owned from his food to retro clothes — something Rodriguez treasured as a collector.

His generosity survived beyond the progression of Alzheimer’s disease, when faces and names no longer meant anything to him.

“He emptied out his entire closet to give to me, and every time that he had a meal, he would always offer me his food even if that meant that he didn't have anything to eat,” Rodriguez said.

While she treasures the extra time she spent with her grandfather, being a full-time online student muffled her extroverted personality.

Walking onto campus for the first time, Rodriguez navigated through the labyrinth of organization booths. Each looked more enticing than the last. Her eyes wandered to medicine-related clubs and Gator Salsa.

Although Rodriguez longs for her Puerto Rican family back in Tampa, she found a slice of home in the Gainesville Hispanic community.

“It's really cool seeing so many Hispanics here because they kind of all have the same culture growing up, but it's also cool being around people who have literally opposite cultures,” she said.

When Dana Tegegn researched UF online, the mechanical engineering program lured her in.  So did the warm Florida weather.

Her first time under the cool breeze and warm sun on a RA-led tour of campus electrified a surge of joy and excitement.

It was the first time the 18-year-old mechanical engineering freshman explored the campus. She made a voyage to take it all in, having moved from Uganda just days before.

“I've always lived in tropical countries, so finding that climate that isn't super cold was something that I wanted,” she said.

Tegegn, whose parents are Ethiopian, lived across Asia throughout her life. The family mostly based itself in India, Thailand and Uganda.

As a global citizen, she effortlessly strikes up conversation with new people from all over the world.

“I'm also a lot more eager to learn about people's cultural backgrounds and how people become who they are because pretty much everyone that I would meet prior to college always had a super intricate backstory, and it all made sense to who they are,” she said. “I always try to look for that in people.”

Tegegn found her place in ordinary conversations — whether in class, her dorm or Plaza of the Americas. She’s always out on the prowl, hoping to listen to others share their stories.

Dazed eyes perched above blue medical masks greeted Isabella Garcia as she stepped onto the charcoal steps of the bright blue-and-orange RTS bus.

Shuffling toward an empty seat, her mind raced with worry.

Is this the right stop? Where do I get off? Will I make it to class on time?

“Are you a freshman?” a stranger beside her asked with a warm smile radiating under their mask.

The 18-year-old political science freshman’s nerves began to calm as she chatted with the stranger and realized they were an older student. Others checked into the conversation. Soon, boisterous laughter overwhelmed the bus.

“I have never been so close to so many people, but at the same time, made so many friends so easily,” Garcia said. “I think more than the buses being packed, the people and the camaraderie between Gators has been the most memorable my first week here.”

Once she tackled the buses and became more comfortable getting around, she found solace in exploring Gainesville.

“I’m finding my favorite spots to get coffee and hanging out with friends,” she said. “I feel like it's a really good balance of the college experience and academics.”

While she became more familiar with the city, Garcia still felt added pressure as a second-generation Cuban American.

“Being of Hispanic descent, I know it might sound a little foreign to some people, but leaving for college isn't really the norm,” she said. “I feel like I need to do my best, and I need to get the most out of my education because I went ahead and took the step to leave.”

Garcia’s anxieties melted away as classes started. However, culture shock consumed her. Beans, coffee and classic Latinx products were placed in the international section. In Miami, her hometown, they’re everywhere.

But despite Gainesville’s supermarket product placement, the city and UF made up for it with lots of places to explore — and the free time to do so.

Riding his bike through Depot Park, Dylan Reed felt the viridescent leaves carry a breeze past his cheek. The park became more and more familiar to him as he explored Gainesville over the late summer.

The 18-year-old was accepted into UF’s Pathway to Campus Enrollment program.

He often used his bike rides as a period of reflection. He decided he would visit the Harn Museum of Art the next day. Between the hours spent analyzing paintings and installations, Reed realized what truly inspired him was art. Before classes even began, he switched from a business major despite his knack for small business projects.

As a graphic design student, Reed can go into class for his Workshop for Art Research and Practice course. He found it to be one of the most interesting and intensive classes he has ever taken. But it’s still nerve-wracking.

“My friend asked the class one time while we were on a break, ‘How many people don't have a clue what we're doing right now? How many people are super stressed?’ Everyone raised their hand,” he said. “It was nice to know that we were all lost, but at the same time, very excited to get started.”

Reed moved into Gainesville prior to classes to have more time to adjust to the area. He came from Palm Beach Gardens, seeking new places and friendships. Instead, he ended up finding something quite different — the Delta variant.

His first thought was that he got a nasty cold. After he spent a week in bed, his parents urged him to get tested. And when the result came back positive, Reed headed over to the UF Emerging Pathogens Institute.

“I got it before we started knowing about it because I was fully vaccinated with Moderna,” he said. “I didn't really know about it, and then I got sick.”

Although the past year of pause has made the UF experience unique, students can find comfort in adapting to an unfamiliar environment together.

The odd bright yellow spikes outside of the Computer Sciences and Engineering building become the French Fries and the Plaza of the Americas becomes the perfect shortcut to get to class quickly.

As incoming students explore Gainesville, they find the people who make them feel welcome and places that captivate their interests, all while becoming Gators. 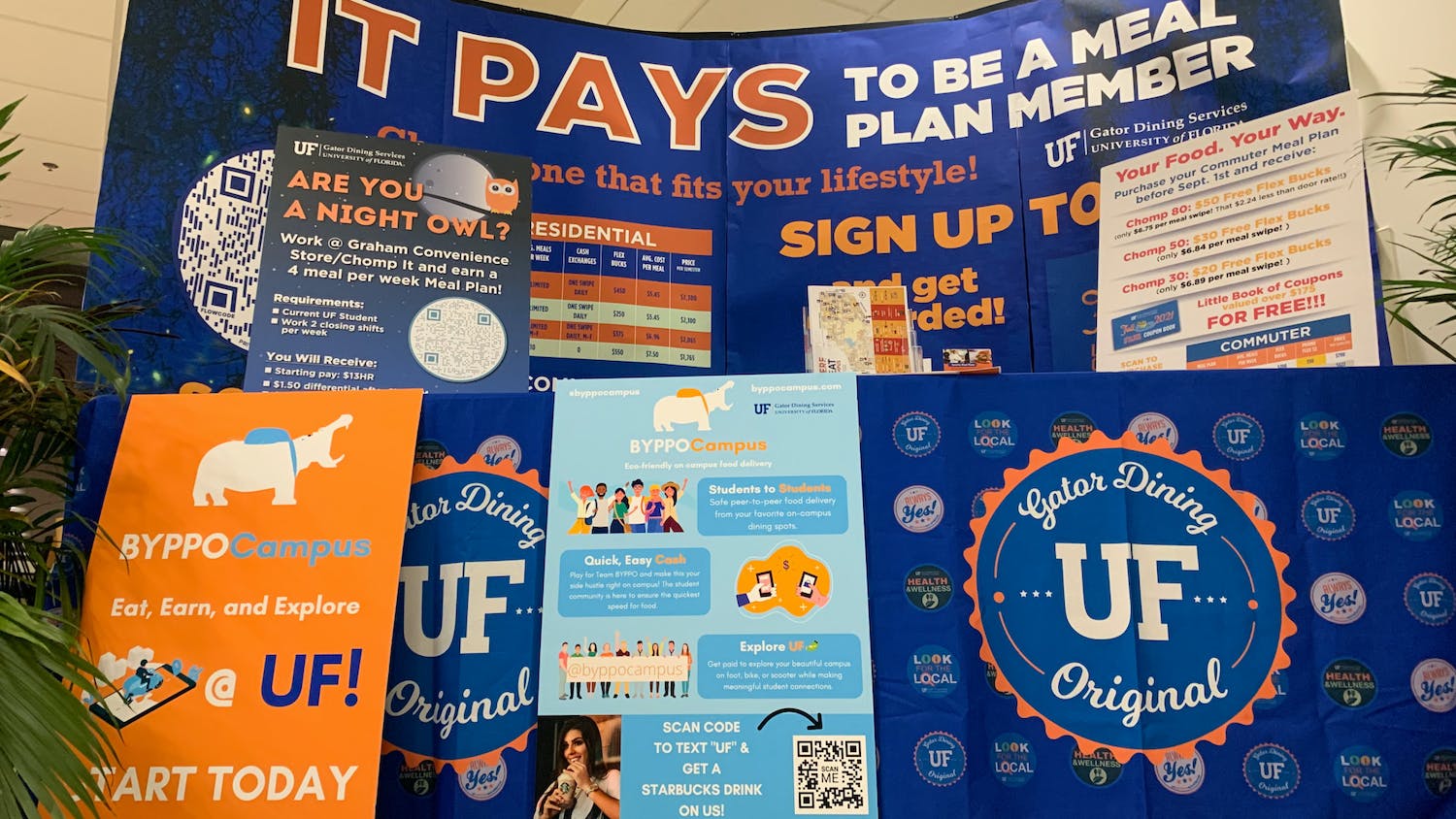