Howie Mandel filled the O’Connell Center with laughs in an event for UF students Monday evening. The comedian, America’s Got Talent Judge, Deal or No Deal game show host and personality spoke to a crowd of a few hundred students.

Accent Speakers Bureau, an agency of Student Government that invites guest speakers to campus, spent $110,000 on the event, according to a contract; it included Mandel’s airfare, meals and hotel.

The event was free to students, who entered on a first-come, first-serve seating basis. Doors opened at 6 p.m.

The SG organization chose Mandel to speak because of his mental health advocacy, which makes him relatable to students and his experience in the entertainment industry, Scheuer wrote in an email.

“We chose Howie Mandel, as he has been a major force in show business for over 30 years,” Scheuer wrote. “The process for organizing the event was lengthy, but the most important aspect was the work of my staff.”

Mandel jumped on stage in a black and red outfit and sat in one of two chairs positioned on the stage. Throughout the conversation, Spiker asked questions about topics like mental health, Mandel’s career and his Tik Tok, where Mandel has more than 9.5 million followers.

The crowd erupted as Mandel shared anecdotes like the time he performed comedy with a latex glove on his head or when he read out names of UF students who did not show up to their reserved seats at the event.

“Everything I was ever expelled for, punished for, hit for is what I seem to get paid for as an adult,” Mandel said at the event.

Mandel also spoke about his experiences with OCD and ADHD, seeking help and how his diagnoses affect his ability to pay attention and work with others; he has not shaken someone’s hand in 20 years, he said.

“I'm incredibly neurotic, and people know me as a germaphobe and don't shake hands, and I have OCD and anxiety and depression,” he said.

One of his children once touched his pant leg with their shoe, and Mandel turned the car around to change his clothes. Another time, as a host on America’s Got Talent in 2015, a contestant hypnotized Mandel and had him shake hands with other judes, which upset him, he said.

During the Q&A portion, Spiker read student-submitted questions that prompted more laughter like “how do you keep your head so shiny?” and “will you marry me?” Mandel responded yes to the latter question before turning to his wife of 22 years who was seated in the crowd and joking about leaving her for a teenager.

Fans of Mandel like Lauren Dawson-Scully, a 19-year-old biology sophomore, and Jeremy Sabol, a 21-year-old economics and psychology junior, attended the event to hear about his career and rise to fame.

“You don't get to see these people ordinarily,” Sabol said. “I think it really enriches student experience.”

At the end of the event, Spiker read a question that he said got a few requests: “can you make a Tik Tok with them in the back?”

Mandel took out his phone, spoke into the microphone and uploaded a video with students doing the ‘gator chomp’ in the background before walking off stage as students cheered. 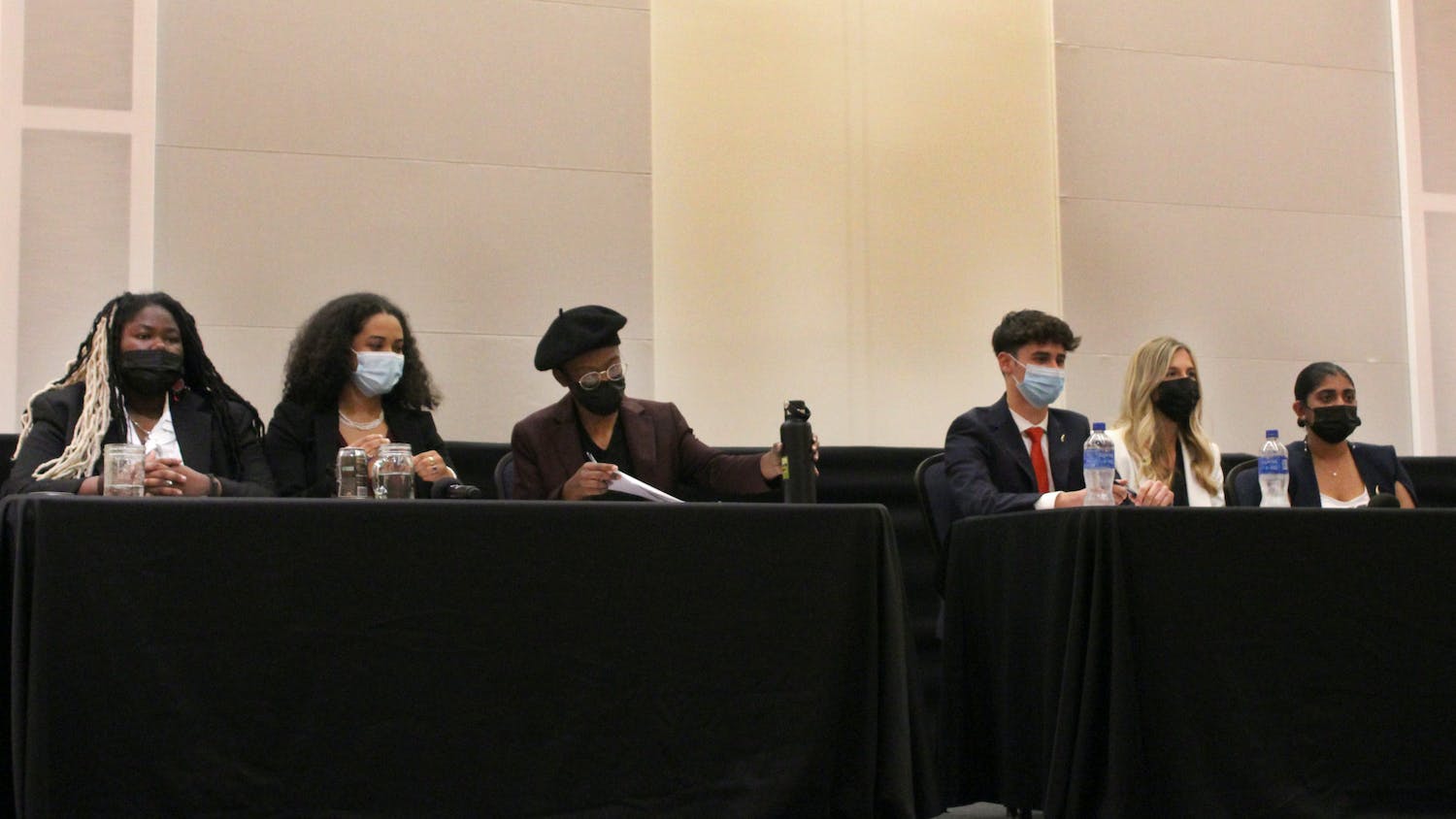