Fuchs has full confidence in Sasse

While there are three weeks between Sasse’s announcement and the Board of Trustees’ vote on him, there were only about three days between Fuchs’, he said. The extra time allowed the presidential search committee to do more research and more thoroughly understand Sasse before his confirmation.

Ideally, Fuchs said the search process should be completely confidential: The president would be selected behind the scenes and announced to the public without their input, mimicking the selection process at top-ranked public and private universities.

“People say, ‘Well we ended up with you, so it must be an OK process. And I say, ‘You could’ve gotten somebody much better,” Fuchs joked.

The presidential search was largely kept under wraps due to a new state law passed in March — SB520 — allowing the process to stay private. In comparison, Fuchs’ approval was more public, with his name being announced alongside three other candidates, similar to what Lisa Lundy, a search committee member and faculty member, said the committee was hoping to do.

Although Fuchs wasn’t involved in the presidential search and doesn’t sit on the Board of Trustees, he met with Sasse in early October to give a tour of the presidential mansion. In that time, and based on opinions from colleagues he’d spoken to, Fuchs said he gained full confidence in Sasse.

“They just seem very similar to me in terms of age [and] in terms of their ability to communicate,” Fuchs said. “Very different politics; but if President Obama was a sole candidate here, I’d be incredibly supportive of it as I am with Sen. Sasse.”

Sasse will have skills no other UF president has had, Fuchs said. He’ll bring great communications skills and resources from donors, foundations, federal government and the state.

“I believe he’ll be phenomenally successful,” Fuchs said. “I also believe he’ll set aside his politics, and I would suggest we should do the same.”

While he’s confident Sasse will be able to put aside his politics, Fuchs said Sasse should address his past comments on same-sex marriage. It’s important, too, for Sasse to show inclusivity through his actions.

“Given he has this voting record — he has this view about gay marriage — will he still welcome, embrace, support, encourage [and] want to grow the LGBTQ community?” Fuchs asked.

Fuchs refrained from offering too much advice to his successor, but mentioned the presidency demands a loaded schedule.

“I wish for him that he just has a lot of fun,” Fuchs said, “as I’m sure he will work hard — that he enjoys it and enjoys being a Gator.”

Some members of the UF community don’t share Fuchs’ confidence in Sasse.

On Oct. 27, the UF Faculty Senate voted to adopt a resolution of no confidence on the selection process of sole UF presidential finalist Sen. Ben Sasse, by a significant majority vote of 72-16. When the meeting was adjourned, the senators present erupted into applause.

The vote represents a little more than half of the entire Senate, which has 164 members. It is unclear whether the resolution will affect Senate Faculty Chair Amanda Phalin’s vote to approve Sasse as the next UF president Tuesday.

Phalin didn’t specify whether she’d vote yes or no.

The meeting will take place Nov. 1 at Emerson Alumni Hall. Sasse will be interviewed by the Board of Trustees, which Phalin holds a seat on. The event is open to public comment, and it will also be livestreamed.

After protests Oct. 10, Fuchs sent out a university-wide email reminding students of a two-decade-old regulation prohibiting protests inside UF buildings. The policy will be enforced Tuesday, according to the email.

During the meeting, senators particularly took issue with the lack of transparency during the nomination process, questioning why there weren’t more nominees. While taking questions from attendees, Lundy said the committee originally wanted to present three nominees. However, faced with requests from candidates to be the only nominee if they were publicly announced, the committee opted to only select Sasse.

Cynthia Roldan, UF spokesperson, had no comment on the Faculty Senate vote.

The Faculty Senate’s vote of no confidence comes just over a week after the Student Senate’s Oct. 18 resolution condemning the presidential search process and Student Body President Lauren Lemasters for unanimously recommending Sasse as finalist and a general lack of transparency. Lemasters, who also is a member of the Board of Trustees, recently told students that her vote is undecided.

The final resolution, after going through an amendment process during the Faculty Senate meeting, said the UF faculty were kept in the dark about the final candidates and their qualifications.

The final, amended no-confidence resolution included language acknowledging UF conducted the search in accordance with SB 520 and that the Faculty Senate was informed of multiple, well-qualified candidates who were unwilling to be named publicly.

The committee’s vote on Sasse was unanimous, Lundy said. Other candidates didn’t receive above half of members’ votes.

But Sen. Breann Garbas, clinical assistant professor, wasn’t convinced that was a reason to keep the selection as secretive as it was. She presented the resolution as something not necessarily condemning Sasse, but as a critique of the entire process.

“How is it possible that it took an emergency hearing for us to get as much information as we did today?” she asked, addressing Lundy.

Christian Casale and Alissa Gary contributed to this report. 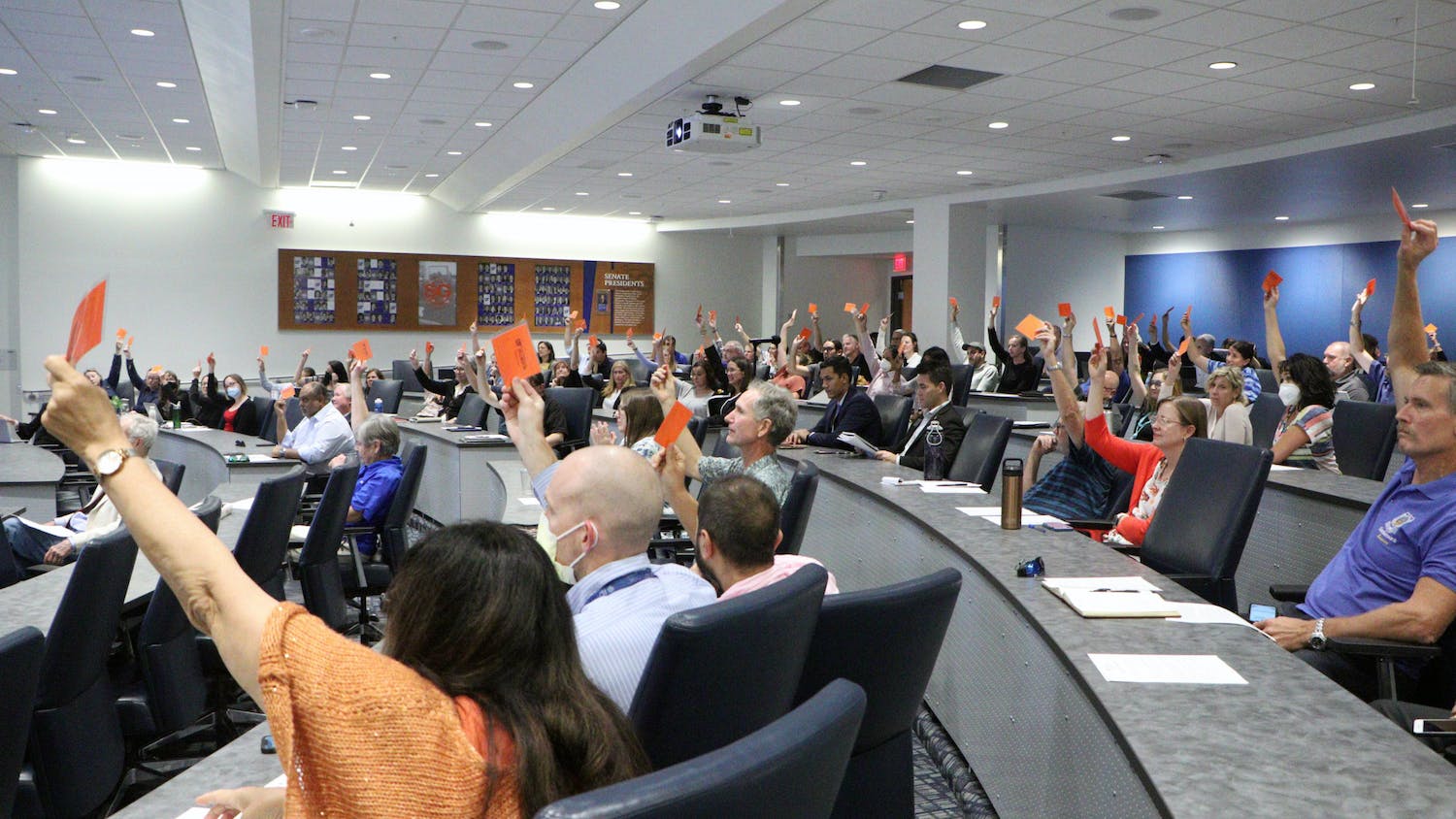