From the moment their tiny toes first peeled from the gym’s worn, leather mats, their clocks began to tick.

Gymnasts leap into their careers at a young, tender age. From that point on, it’s full speed ahead.

They learn to turn teetering footsteps into tumbles and dismounts, flipping through the air with such precision and grace that they seem to defy all laws of gravity.

But, of course, gravity eventually sets in.

Those landings, swings, tumbles and turns begin to wear on their fragile bodies.

Their ligaments tear, their bones snap and the only tool they use in gymnastics becomes flawed.

Because the craft is merciless, pounding down the body from such a young age, gymnasts’ careers are mostly over when they begin competing in college. Injuries rack up, and by the time gymnasts have reached their 20s, their bodies have aged exponentially.

“They’re kind of entering what I would consider the end of their careers as gymnasts,” UF gymnastics’ athletic trainer Stacey Higgins said. “You would see athletes as they’re getting kind of older and getting ready to retire — well, that’s where these girls are.”

This was all too real for one Gator, freshman Brittney Noble, who recently found out her back injuries have put an end to her college career before it could even really begin.

But Higgins said it is rare that UF gets a gymnast who is not injured in some way. Those who can push through the pain, like Noble did all season, work tirelessly to press on.

“They train when other athletes or just regular people would not be able to do the things they do,” Higgins said. “They’ve done it their whole lives, and that’s their mindset. They find something to do to keep them doing gymnastics even when they’re injured.”

In practice, the injured athletes have workouts tailored to their breaks, tears and twists, training for the events in which they can compete around their limitations.

However, that requires far more than just a different practice routine.

The already strenuous life of a student-athlete becomes even more grueling when mending a physical pain.

The injured gymnasts begin their days with rehabilitation in the Lemerand Athletic Facility for about an hour. Then, they tack on an additional hour of treatment both before and after practice. Add in doctors appointments on top of all of that.

“Having to do that every day, it’s tedious,” she said.

King eventually grew frustrated with the repetitive rehab and stopped her treatment, jumping right into a bars routine at the UF intrasquad meet in December, when she re-injured her shoulder. Her mistake cost her, as she was only able to return to the bars for the last three regular-season meets.

“I realized I have to keep doing rehab and listening to the trainers,” she said. “They are right, and they are doing the best they can to get you fit and healthy for competition.”

Patience with injuries was a problem that also stemmed in senior Maranda Smith, beginning when she was 8 years old.

Smith had more serious injuries in the later years of her career, most notably when she was competing as a freshman for UCLA.

She was practicing her floor routine when her shin snapped.

“I got the surgery thinking it was going to be any easy fix and that I’d be back in the gym right away,” she said. “That didn’t happen. I had to be more patient and rehab and learn how to walk again, and be a normal person and not an athlete first.”

After two years, Smith was finally able to continue her career, transferring to UF in 2008.

Smith overcame her injury and is now a top performer for the Gators, competing on floor exercise and vault. Last week in the Southeastern Conference Championships, she tied for third overall with a 9.9 for her floor performance.

Smith stressed that when dealing with injuries, it wasn’t only what she did with her body that helped her bounce back.

“It turned into a mental game where, instead of practicing it physically, I’d practice it in my head,” Smith said. “Me visualizing and feeling what my body would be doing if I were doing a skill.”

When she was able to start doing gymnastics again, she said she could mentally picture what it was like to perform, so it was easier to get back out there again.

But returning to competition can be terrifying — especially in the skill the gymnast was performing when the injury occurred.

While Smith’s injury came to light when she was practicing her floor exercise, she admitted it was nerve-wracking when she took the floor once again. But she continued her mental training, telling herself it was OK because she was healed.

Even on bars, King said she knows she should not psych herself out over her shoulder injury.

“On my bar routine, I can still feel the shoulder injury,” King said. “I know it’s there, but it is healed. And you know what? I have a job to do, and I’m focusing on my routine and I’ll deal with that later.”

Their minds are further tested when the injured gymnasts are at the meets in sweats while the rest of the team is in leotards, readying themselves for competition.

“I’m seeing all my other teammates competing and doing really well, I want to do that for myself,” King said. “It’s difficult to put yourself in that situation, but it’s not all about you. It’s about the team.”

Smith said she, too, had difficulty with patience in recovering as she watched her teammates grow and improve while she was healing.

Accepting a role on the sidelines isn’t all the Gators have to do when they are injured. In gymnastics, it goes one step further.

They must brush aside their own sorrows and flash a smile.

If they are unable to compete, they rise to a new role.

“They have to be able to balance the inner sadness or frustration that they have from being injured and not being able to get out there,” coach Rhonda Faehn said. “They have to understand they have a new role for the year.

“That role is to be the most supportive teammate that they can be and to really help everyone else.”

Gymnasts on the sideline are expected to cheer as loud as they can while upholding the responsibility of moving the mats for their teammates during competitions.

Sophomore Liz Green has gotten especially familiar with the role this season.

Unlike Smith and King, Green hasn’t been cleared to return to competition due to a back injury.

But Green thinks it was meant to be this way.

“I believe that God has a reason for everything and timing for everything,” she said. “I feel like if it’s not meant to be this season, I’m going to heal and get rested for next season.

“We’re each a piece of the puzzle to this team and I think that this year really I just found a different way to try to step in and fill a different spot.”

And for those whose bodies are unable to mend and who can’t bounce back into competition to finish the tail end of their gymnastics careers, there is always a supportive role that needs to be filled.

Like Noble, current student coach Kailey Tissue endured career-ending injuries on her knees and shins, but that’s not keeping her off the mats.

“She chose to put her passion into helping out the team,” Faehn said. “She still feels like, even though she’s not out there performing, she can still help this program and share her love and her passion and excitement with the team because this is her family.

“The same thing is going to be with Brittany.” 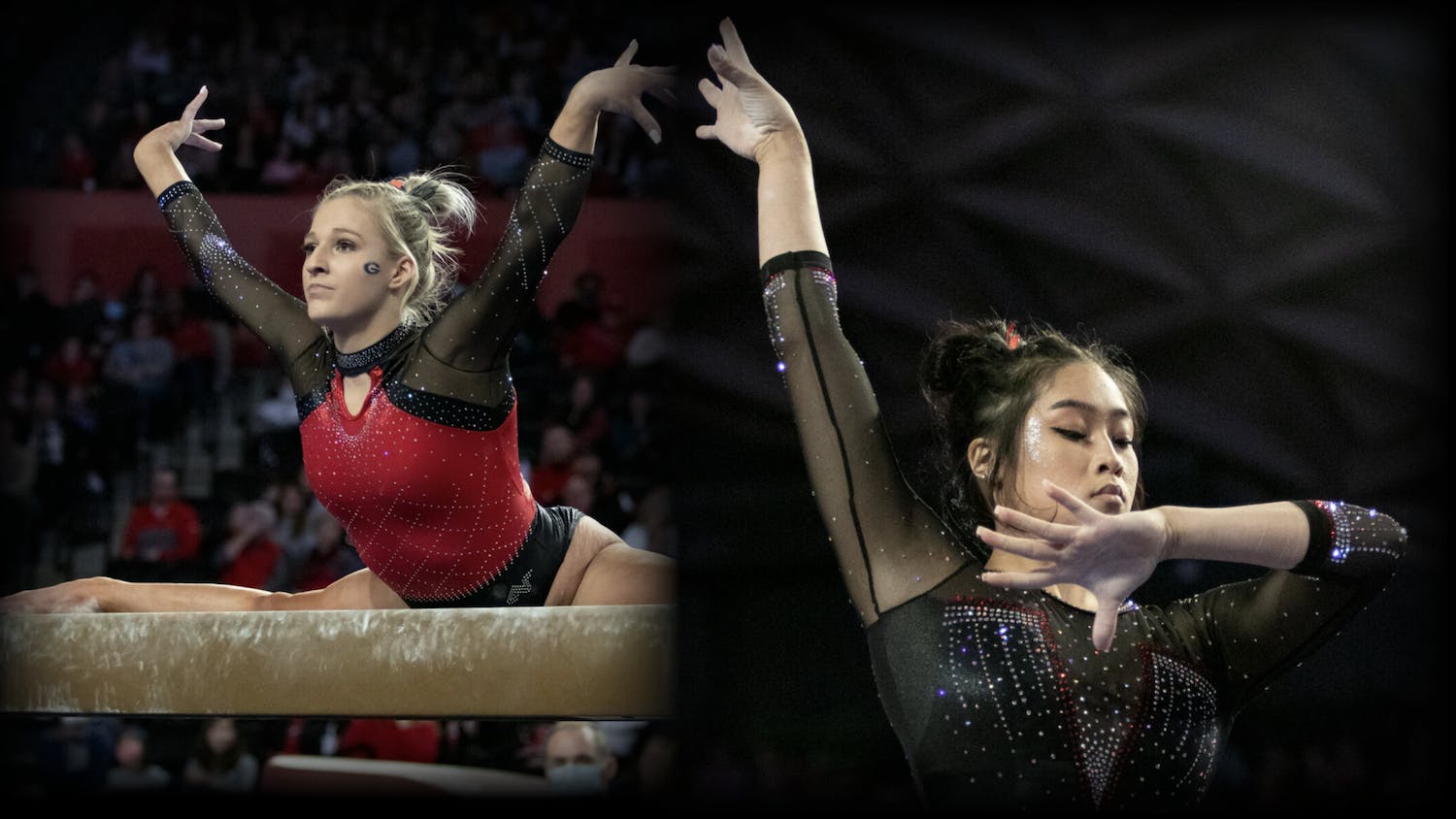