‘It’s not a resource that runs on its own’: Hunger pangs felt throughout campus

Dalice Betterson-Smith grew up in a single-parent household and said her mom did everything to give her children the best life possible.

Credit and debit cards were regularly declined at stores and restaurants, and PB&J sandwiches constituted a typical meal in her house.

Despite this, Betterson-Smith worked hard in school and got into UF. But that’s when the real struggle began.

“I had no financial aid my first year of college, so I had to pay for everything out of pocket,” said Betterson-Smith, a 20-year-old family, youth and community sciences junior.

Betterson-Smith also commuted to and from school from her home in Starke, Florida, and was always on the go. She didn’t have the time nor the money to eat properly, she said.

Some days she wouldn’t eat. Others, she would buy a bag of chips and other cheap snacks at grocery stores and call it a meal.

Betterson-Smith was experiencing food insecurity, an issue faced by college students across the country. A study by Aseel El Zein, a 26-year-old UF human nutrition doctoral student, showed at least 31.5 percent of the 899 UF students surveyed in Fall 2017 were food insecure. This included both graduate and undergraduate students, she said.

Food insecurity is defined as a lack of reliable access to sufficient quantities of affordable and nutritious food due to limtied financial resources, El Zein said. Simply put, a student who may not know where their next meal is coming from.

The research conducted by El Zein was comprised of two studies. One looked at college freshmen from eight universities, including Syracuse University, Auburn University and UF, while the other focused entirely on UF students.

The recent study that surveyed 855 freshmen from eight universities found 19.1 percent were food insecure. An additional 25.3 percent were found at risk for food insecurity, meaning they experienced anxiety about food, but there was not sufficient evidence of food shortage or low food quality.

The results also showed 21.7 percent of the 244 UF freshmen surveyed were food insecure.

The study explained food insecurity can result in poor sleep quality, higher perceived stress and a GPA below a 3.0.

El Zein is encouraging university administration to start looking for food-insecure students early. Risk is heightened with factors like race, off-campus housing, low parental education and absence of a meal plan, she said.

El Zein’s UF-focused study also found that 70 percent of students experiencing food insecurity were aware of the Field and Fork Pantry, but only 15.6 percent had used it.

The main barriers preventing UF students from entering the pantry are social stigma and underestimating their need for the pantry, according to results from El Zein’s study.

“Students reported that they may be embarrassed and kind of intimidated to enter some sort of pantry,” she said.

El Zein suggested turning the pantry into a hub where students can come and take cooking classes as well as changing the name of the pantry so it sounds less intimidating.

Despite research results, the Field and Fork Pantry has a different stance.

As of Friday, the pantry had completed 39,809 transactions and distributed 251,064 pounds of food and supplies since it opened in August 2015, said Ambre Hobson, assistant director of the Care Area at the Dean of Students Office. The pantry is open to anyone with a valid UFID, though they do not keep a record of who uses it.

The pantry is currently expanding and is expected to be completed by Fall 2019. The expansion, which will more than double the size of the current pantry, will also create a space for storage, processing donations and a cooking demonstration area.

“It’s not a resource that runs on its own,” Hobson said. “We are very much dependent on the support and kindness of others.”

Jackie Shannon, a 21-year-old UF nutritional sciences senior, is the president of the Food Science and Human Nutrition Club.

Shannon helped organize a few collaborations with the Field and Fork Pantry, such as tabling at the pantry’s annual Fresh Off the Farm event, she said.

“It was a beautiful evening on the farm where various organizations came together to promote local and sustainable food choices,” Shannon said. “It was a lot of fun, very informative and there were some delicious food samples available as well.”

Shannon is not the only one supporting the pantry. Betterson-Smith is as well.

Despite Betterson-Smith’s past struggle with her own food insecurity, she volunteered 25 hours at the pantry as a requirement for a class in spring, she said.

The pantry is a “valuable” resource for both students and faculty, she said. However, Betterson-Smith said she did not use the pantry while she was struggling with food insecurity, because she didn’t know it existed until she volunteered. Although she still struggles financially, her food insecurity was alleviated by living at the Cooperative Living Organization. Here, a chef cooks five days a week, a which is included in her $400-per-month rent, she said.

Despite not personally using the pantry, Betterson-Smith encourages people to be open about their struggles and said no one should be afraid or nervous to use the pantry.

“Do not be afraid,” she said. “There are fellow students there to assist you with the process. Do not feel as if you are less than because you use the pantry. We are all Gators, no matter your financial situation. You matter.”

Among the 899 students surveyed at UF, researchers found:

A volunteer stocking shelves with canned food at the Field and Fork Pantry on UF's campus in 2016. 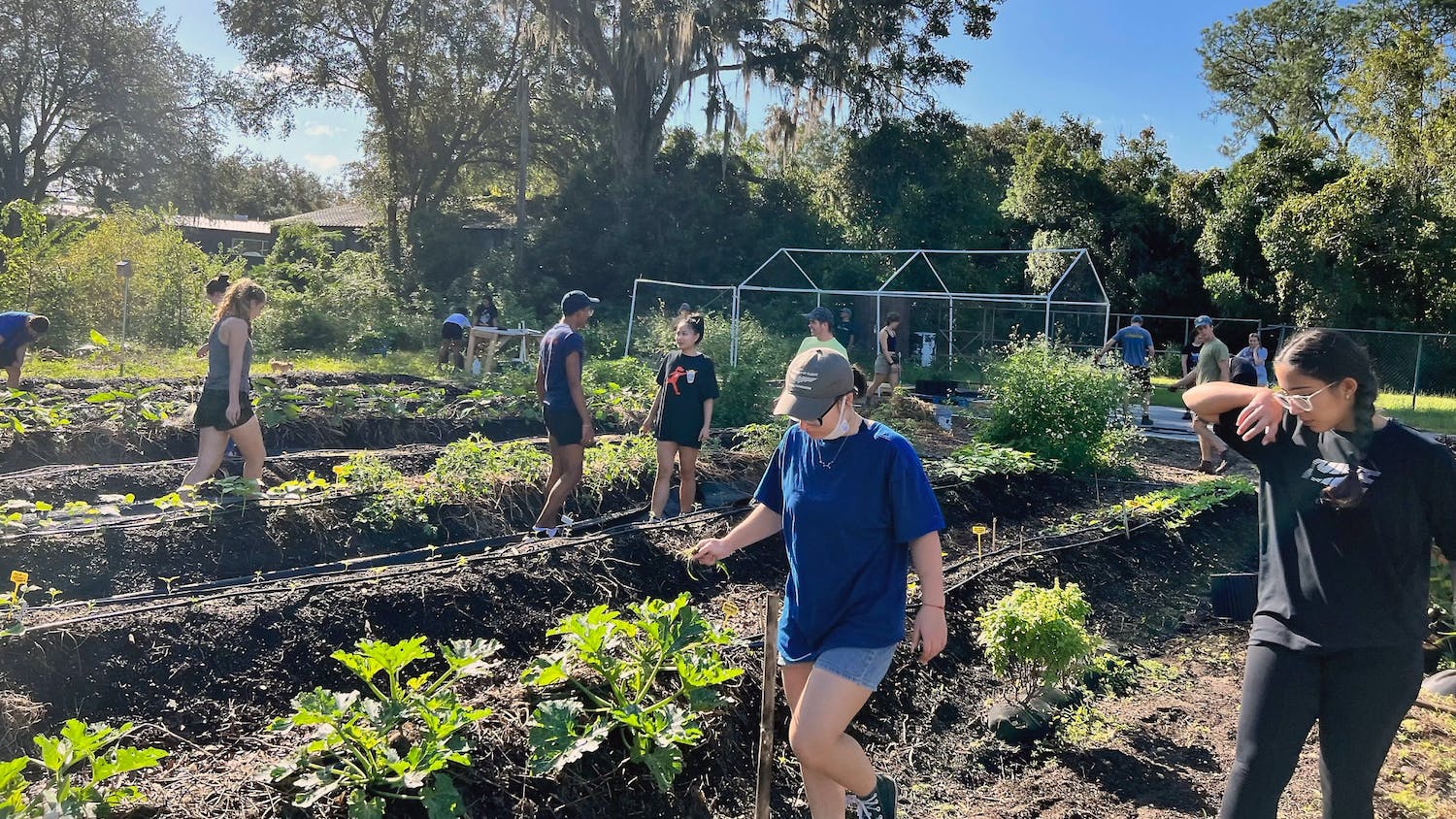 Planting roots: how the Gainesville Giving Garden fits in with local farm culture