These UF students can’t vote. But they want others to cast their ballot this election season.

Michell Hernandez and Saira Gonzalez do not exist.

The two are undefined in UF’s eyes, marked down as resident aliens despite not being residents. Their status as Deferred Action for Childhood Arrivals (DACA) recipients has left them feeling confined, they said.

Students like them are affected from the get-go, Gonzalez said. Preview is exciting for most, but hard for undocumented students who know they could be pulled aside and told something is wrong with their documentation, or that they are not eligible for financial aid.

“The things that most students experience, we are very isolated in,” Hernandez said.

Hernandez, a 22-year-old microbiology and cell science senior, is the co-president of immigrant rights group UF Chispas. Gonzalez, an 18-year-old anthropology sophomore, is the group’s assistant membership director. They immigrated from Mexico at 1 and 3 years old, respectively.

Hernandez and Gonzalez are two of 2.2 million temporary lawful residents in the U.S., according to Pew Research. Their status permits their residence in the United States even though they are undocumented, but makes them unable to vote in the upcoming Florida primary election on March 17, further setting them apart from fellow students.

Still, like many other students who won’t be able to cast a ballot, their history has them invested in the election, where they try to make their voices heard.

Hernandez and Gonzalez have lived in the United States their entire lives, first applying for DACA at 16 years old. The program allows undocumented immigrants who were brought to the U.S. as children to be granted residency, renewable every two years.

It is estimated that half of eligible recipients are in high school or college, according to the Hechinger Report.

DACA was rescinded in 2017, and about 800,000 recipients live in uncertainty as this action’s legitimacy is being decided on in the Supreme Court. Having lost her DACA status and protections in the past before she could pay the $500 it cost to renew it, Hernandez is familiar with worries of being pushed into an unfamiliar country, she said.

“All I really have known is the United States,” Hernandez said.

In her home town of Ruskin, Florida, Gonzalez has seen families like hers torn apart and community members held in detention centers. While her status has helped in pursuing her career goals, Gonzalez said she is limited in her options and fears the threat of deportation that looms over her family.

Both said they have a deep sense of voting’s importance. Gonzalez said she sees voting as a way to express your opinion and support others politically. She understands its weight since she cannot vote herself.

“It’s just an important thing to do, and I think a lot of people take it for granted,” Gonzalez said.

Growing up in Ocala, Florida, Chickakuragodu did not have the rights of a regular citizen. The 21-year-old microbiology junior was born in India and moved to the U.S. when he was 3 years old.

This is his first election since he became a U.S. citizen in January.

It was not a simple process. Chickakuragodu was threatened with deportation in 2007 after a mistake from his family’s lawyers, he said. He dropped out of school and his dad lost his job.

“It was kind of a chaotic period,” he said.

But Chickakuragodu became politically active after this and spent 2016 and 2018 canvassing for election candidates, he said. Knocking on every door in Ocala, he was struck by the lack of interest while he was trying so hard to be able to vote.

“It was just really frustrating to see voter apathy growing up,” he said.

However, people in other countries care deeply about American politics, according to Annie Ratsathanuwati. The 22-year-old accounting junior from Thailand is one of more than 6,000 international students at UF, and said she has a longstanding relationship with American politics.

Ratsathanuwati remembers her fifth grade teachers holding a poll on who the students thought would win the U.S. presidential election. Later while studying abroad in Germany, she recalled following the 2016 election. All of her classmates were interested in American politics, and she still is.

“I just feel like the U.S. can really shape the future of the world,” she said. “It’s just interesting for me to see where this is going.”

As another international student, Hamza Albasit, a Pakistani 22-year-old economics and information systems senior, finds himself engrossed in the same way, he said. He has experienced politics back home, in Norway where he attended high school and in the United States, all of which differ significantly, he said.

He remembers being alarmed after talking to people who didn’t vote in 2016 because they thought their ballot would be insignificant.

“As Americans I thought that people would feel a civic duty to do it,” Albasit said. “It’s completely irrational to not go and put your voice in it.”

Restricted from sending a ballot, these students still maintain interest.

Ratsathanuwati considered making a campaign contribution to Pete Buttigieg’s campaign before he dropped out, but found out her donation would be considered “foreign intervention.”

While she does not see a particular platform as extremely unsound, she is unsure if any candidate would be able to unite a split nation. But in spite of polarizing policies, Ratsathanuwati believes candidates can see eye to eye environmentally.

“I really believe in climate change. I know a lot of democratic candidates believe that too,” she said. “That’s something that I think all of them have in common.”

Albasit said he is ideologically left-leaning after his time spent in Norway, seeing what he believes is the better side of socialism through policies like universal healthcare. His favorite candidate is Bernie Sanders.

“He has been consistent over the years,” Albasit said. “The issues that he says are important right now he was vocal about before as well.”

Chickakuragodu was leaning toward voting for Elizabeth Warren before she dropped out for her strong ability to put the pressure on big banks and CEOs, but now supports Sanders because their goals are similar, he said.

UF Chispas is a nonpartisan organization seeking to expose people to information on immigration, helping them decide if they want to vote for a candidate based on those facts. Hernandez and Gonzalez pursue this goal without expressing their own affiliations, they said.

But Hernandez believes people should strive to know what they’re voting for because the perspectives and policies of each candidate differ drastically, she said.

“Trying to understand the holistic approach of a candidate and what you’re voting for is important,” Hernandez said. “I would like people to vote on my behalf with the privilege and power that comes with the right to vote.”

Michell Hernandez, a 22-year-old UF microbiology and cell science senior, and Saira Gonzalez, an 18-year-old UF anthropology sophomore, work with UF Chispas. Both are DACA recipients, and Hernandez is co-president, while Gonzalez is the assistant membership director. 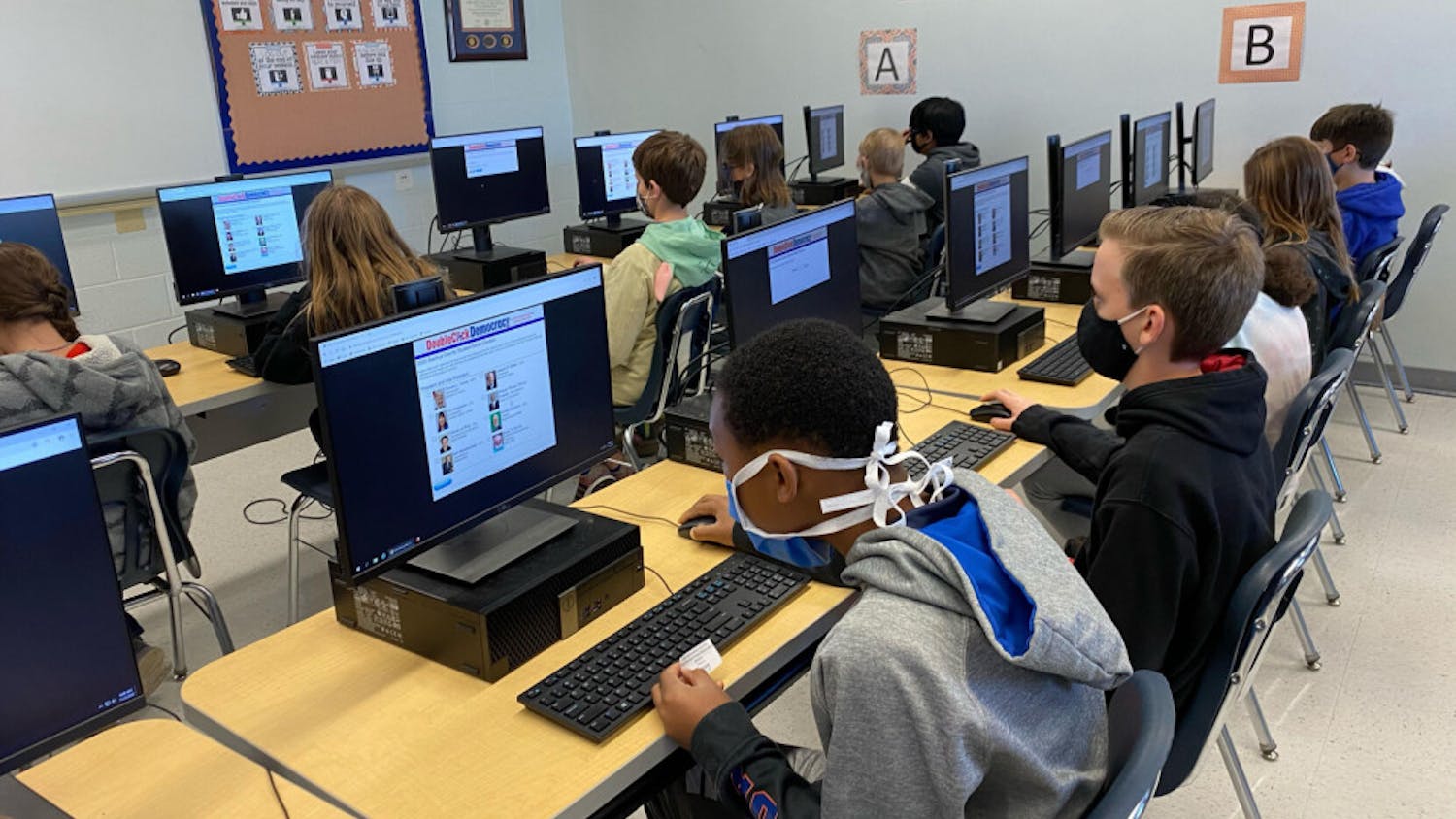