The punk-focused festival turned 19 after a year-long hiatus

Across the ring and off the ropes, title contender MV Young delivered a vicious knee to the forehead of reigning FEST champion Effy.

A new champion was crowned to top off the FEST: We Are Family 4 wrestling event on Saturday afternoon. The spectacle took place at Knockin’ Boots Saloon in downtown Gainesville for four hours of high flying and pile drivers.

The sold-out Knockin’ Boots crowd agreed and rallied behind chants of “This is awesome” and “holy s---” throughout the contests.

Rules were bent and a closet door was broken in half, but luckily for the fans, FEST championship matches always end up with a no disqualification clause for extra entertainment.

The crowd disapproved of MV Young's victory when the bell was rung, but the former champion Effy was quick to grab a microphone to voice his approval of the new champion.

Effy broke his usual anti-hero mantra to praise the hard work and growth that Young has shown over the years and he knows that they’re both on the rise in the independent wrestling scene. Effy also confirmed that a rematch for the FEST championship will take place in the near future, but no date is set up yet.

MV Young, a proud pansexual man, was given the microphone to make one final statement before making his way backstage with another belt to add to his title reign. The competitor currently four different championships from four different wrestling brands.

The crowd applauded both contenders after a magnificent performance and approved of the LGBTQ representation that FEST wrestling offered throughout the day.

After the match, Young said he’s proud to be the champion of an accepting community.

“I walked into FEST and I walked out the champion, and I love that for me,” Young said. “But more so I love that we're going to continue having queer representation at the most punk rock place in America, FEST wrestling, and that I get to beat people up while doing so.”

The FEST: We Are Family roster included transgender performer Edith Surreal and the tag team of “Zaddy” Dillion McQueen plus “Outlandish” Zicky Dice. The competitors weren’t victorious in their matches, but the diverse crowd chanted them on to victory.

Surreal fought in a fatal four-way match against fan-favorite Wolfe Taylor, Beastly and FEST newcomer Mikey Montgomery, who hit two impressive catapult backflips during the bout. Surreal also made a daring stunt, jumping off the second-floor balcony and onto her three opponents.

The tag team Wasteland War Party was victorious in a four-way match to determine the new tag team champion, a position that was previously vacated. The team of Leon Scott and Heidi Howitzer had their hands raised over the team of G.R.I.T, The Mane Event and the Ugly Ducklings.

The tag match offered various stunts from members of the Ugly Ducklings and Mane Event. From backflips, flying elbows and suicide dives, the teams laid their bodies on the line for a chance to hold the tag team belts.

FEST: We Are Family kicked off with a 15-person Liquid Death Battle Royal, a match sponsored by the water brand Liquid Death. After a 25-minute onslaught of signature moves and prop fighting, IMPACT Wrestling veteran Savannah Evans was the last wrestler standing. She was given the Liquid Death Cup, a trophy made with 12 empty cans of Liquid Death, and the top is filled with more cans of sparkling water and plastic-toy sharks.

During the event, the ring announcer made a surprise reveal that FEST Wrestling would return to Gainesville once again on Dec. 4 for the Christmas-themed event, Pickle In The Tree.

After the last year’s hiatus, punk rockers and wrestling fans sold out FEST Wrestling to make the comeback a success in the three-day weekend. Two championship titles found new waists to drape around and a Battle Royal trophy was raised. 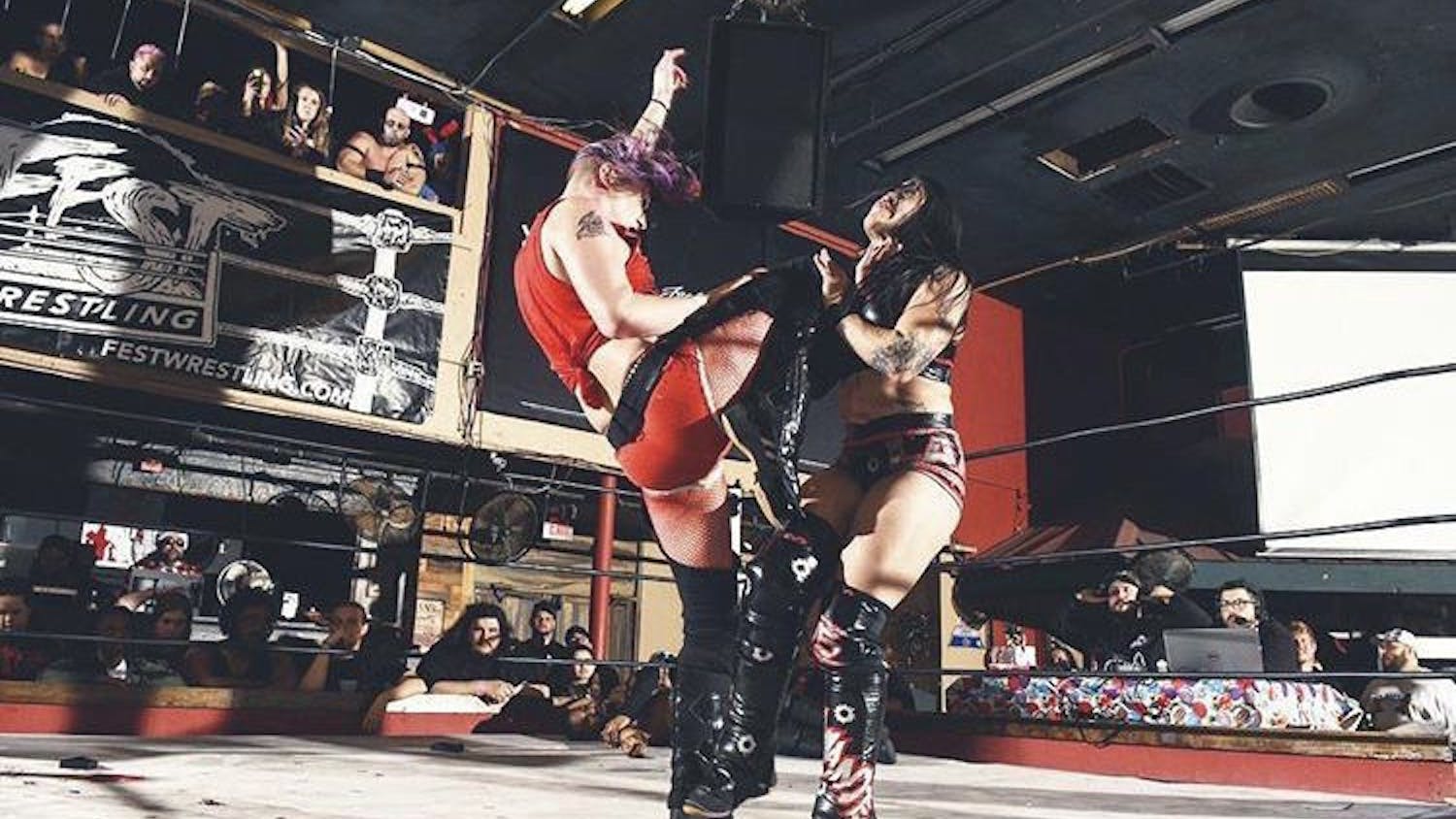