Going for it on fourth down is slowly becoming the latest trend in college football.

As more research goes into when coaches should and shouldn’t go for it on fourth down, teams are finding that there are plenty of advantages to being aggressive.

No team has adopted that mindset more than the military academies. Army, Navy and Air Force combined for 86 attempts on fourth down, converting on 55 of them (64 percent). Army and Navy were first and third in attempts with 39 and 34, respectively.

But it’s not just the military academies, either. Top 15 teams like Oregon, Minnesota, Wisconsin and Notre Dame all went for it on fourth down at least 20 times last season.

Florida was another top-15 team that was aggressive on fourth down, going for it 26 times, the fourth-most in the SEC. It also didn’t take very long for UF to decide to be daring on fourth down, successfully running a fake punt on its first drive of the season against Miami. That move paid off immediately when wide receiver Kadarious Toney took a screen pass to the house on the next play.

Let’s take a look at the SEC as a whole: 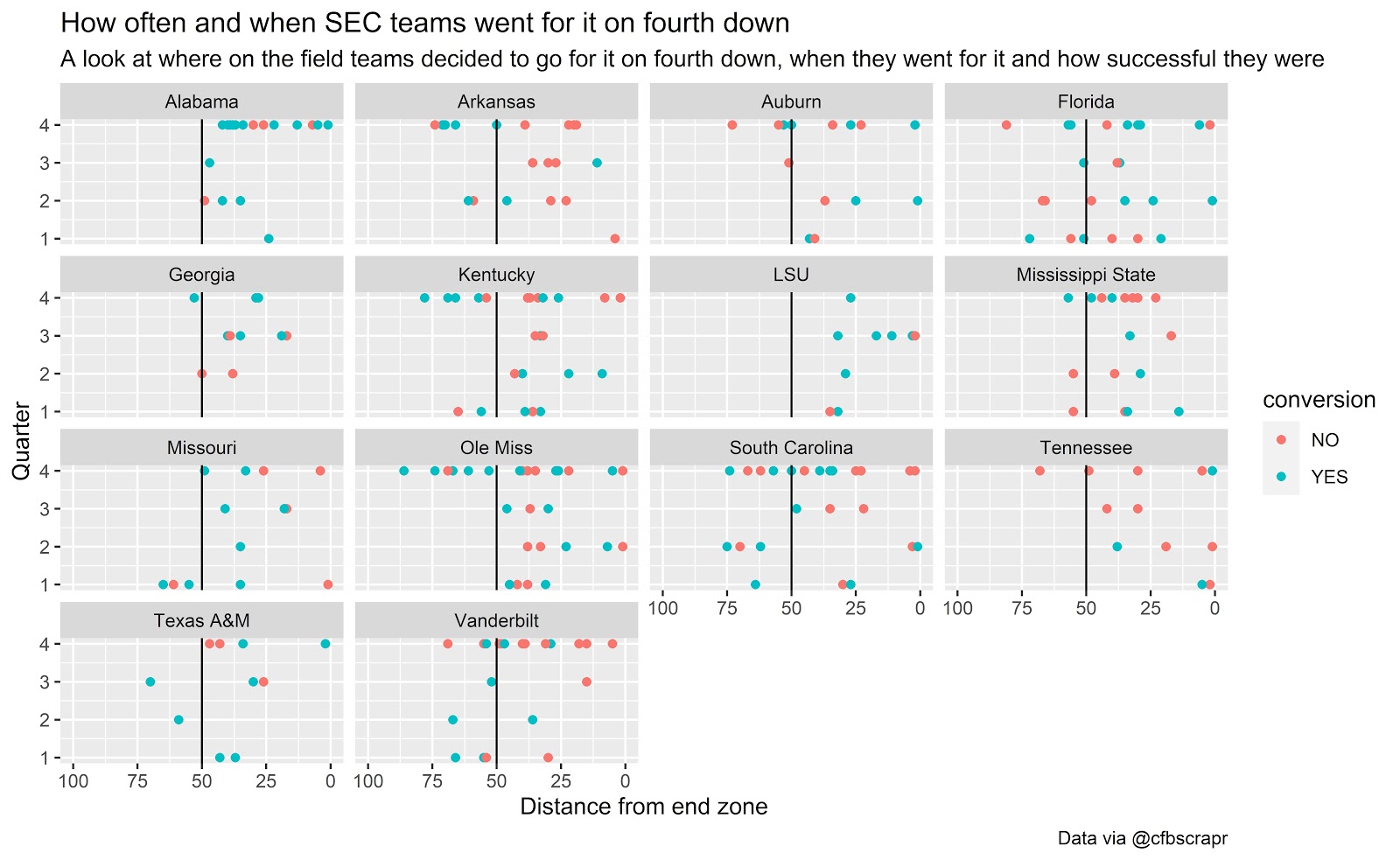 The Gators’ plot is a little strange compared to others, who mostly went for it late in the game and/or deep in opposing territory. While the vast majority of Florida’s fourth-down attempts were around midfield or in plus territory, it didn’t matter how much time was left in the game.

And the Gators were pretty good at it. They converted on fourth down 61.5 percent of the time, tied for 25th in the nation. Out of the teams that attempted at least 20 fourth-down conversions, Florida was tied for 16th.

However, it didn’t just go for it on fourth down with reckless abandon. Instead, the Gators primarily went for it on fourth and short. The average distance to the first-down marker when they went for it was 2.38 yards, which was the eighth-lowest in the country. Only two were longer than five yards, and one of those was an unsuccessful fake punt.

Public research into when you should and shouldn’t go for it on fourth down in college football isn’t as common as it is in the pro game.

Take the New York Times’ 4th Down Bot from 2014. Its findings from 10 years of NFL data found that coaches should go for it on 4th and 1 no matter where it is on the field, anywhere beyond your own 28-yard line on 4th and 2 and any time you’re in opposing territory on 4th and 3.

I bring this up because, even though it’s based on NFL data and not college, this lines up with Mullen’s philosophy on fourth and short last season. The odds are in your favor going for it in these situations, and it can help flip a game on its head.

For example, against Virginia, the Gators led 27-21 in the fourth quarter but faced 4th and 1 from their own 44. Traditionalists might say that going for it in your own territory when you’re already leading is risky and that you should “trust your defense.”

Mullen, despite having a defense that finished seventh in the country in ESPN’s SP+ metric, didn’t do that. He kept his offense out there, and Perine picked up two yards to keep the drive alive. Florida scored a touchdown three plays later to extend the lead to 12. The Gators needed those points to secure an eight-point victory over Virginia.

Fourth down doesn’t mean automatically giving the ball to the other team. It’s a tool that coaches can use and probably should use more often, especially in opposing territory. It’s a way to potentially put more points on the board regardless of talent level.

In order to win the SEC, the Gators may have to continue to be aggressive on fourth down, especially if they continue to be on the wrong side of the talent deficit between them and the likes of Georgia and Alabama. But, as 2019 shows, going for it in favorable situations can boost an offense and be the difference between winning and losing.

Sorry, there are no recent results for popular videos.

Sorry, there are no recent results for popular commented articles.

The Social at Midtown

The Pavilion on 62nd