Sean Smith remembers the first time he laid eyes on it.

He was 10 years old, out with the family for a Sunday afternoon supper. He glanced to the back of the restaurant where eight high-school boys were in a macho free-for-all to finish their burgers.

When he glanced back 20 minutes later, most of them either had their heads resting on the table or were sulking down at their leftover portions. Two of them had finished.

It was the same restaurant that, years later, Santa Fe High School and future New York Giants defensive lineman Linval Joseph would come to after practices twice a week to order the same burger.  There were stories that he used the surplus of free T-shirts as sweat rags.

Flash forward to now. Smith’s a 20-year-old on the far side of an AA degree at Santa Fe College, and he’s decided the Navy’s going to be his next path.

On Tuesday, while most students will be strutting in the tropical sand over Spring Break, he’ll be boarding a plane at Jacksonville International Airport on a one-way flight to start basic training in Michigan.

What do you get your best bud who’s going away to serve for months on end?

It’s three, inch-thick beef patties, a 48-ounce hunk of heart attack, with some lettuce, tomato, onion and a ridiculous heap of thick-cut steak fries getting in the way.  If any restaurant in the 50 states can make a bigger one, Conestogas will see their ante and raise it.

The burger has its own page in the menu, and if you polish off the whole thing you get a T-shirt and a slice of Key lime pie.

Yes, you have to eat all of it.

As he walks in, Smith walks past the hostess, offering a friendly wave. She used to sit in the front row of his 10th-grade algebra class. He takes a seat.

Dixie, a middle-aged waitress who peppers her speech with “hun” and “y’all,” comes over to the table and takes the order. Sean lays it on her. She stops scribbling on her pad.

“Now ya gotta eat all of that to get the T-shirt,” she said.

As she walks back to the kitchen, Sean scans over the menu, processing what he’s about to throw into his face.

Twenty minutes later, Dixie returns. She has Sean’s meal. The tractor wheel-size patties teeter on the plate. Her wrist is buckling at the sheer weight.

“Oh my God, my wrist is about to break,” she said.

Two businessmen at a nearby table break their discussion to lean in for comment.

“Are you going to eat that thing?” one of them asks.

Sean begins mapping out his strategy.

First, he’s going to make a regular-sized hamburger out of one of the patties. Then he’ll take a fork and knife to the other two. The steak fries will come later. His burger comes medium well. It’s better, he reasons, to cook out the water weight.

He digs in. About half way through, the bottom bun disintegrates from the grease. He flips it over and keeps eating.

Nervous about going into basic training in six days?

“No, I know it’s something I can do,” he says between bites then points down at the burger. “This I’m worried about.”

Dixie comes in to check on him.

He gets back to work. Only two more cheese-slathered patties to go. And the fries.

By this time, he’s slowing down. His bites are still the size of golf balls, but it takes 10 or 12 seconds to swallow.

The pressure is building up in his stomach. Then, he looks up.

“How ya doin?” she asks, reaching out to rub his shoulder.

“Under the Bridge” by Red Hot Chili Peppers plays over the stereo in the background — the one that goes “I don’t ever wanna feel like I did that day.”

Two patty halves, the rest of the fries and a pile of debris still lay on his plate. He throws off the napkin and sticks his utensils into the pile of meat like a railroad spike. He hands over the keys.

This might be the first brick to crumble in his wall of stubbornness. Basic training will probably take care of the rest.

Back in the car, he scoots back the passenger’s seat and belches.

The Navy’s in for a real treat. 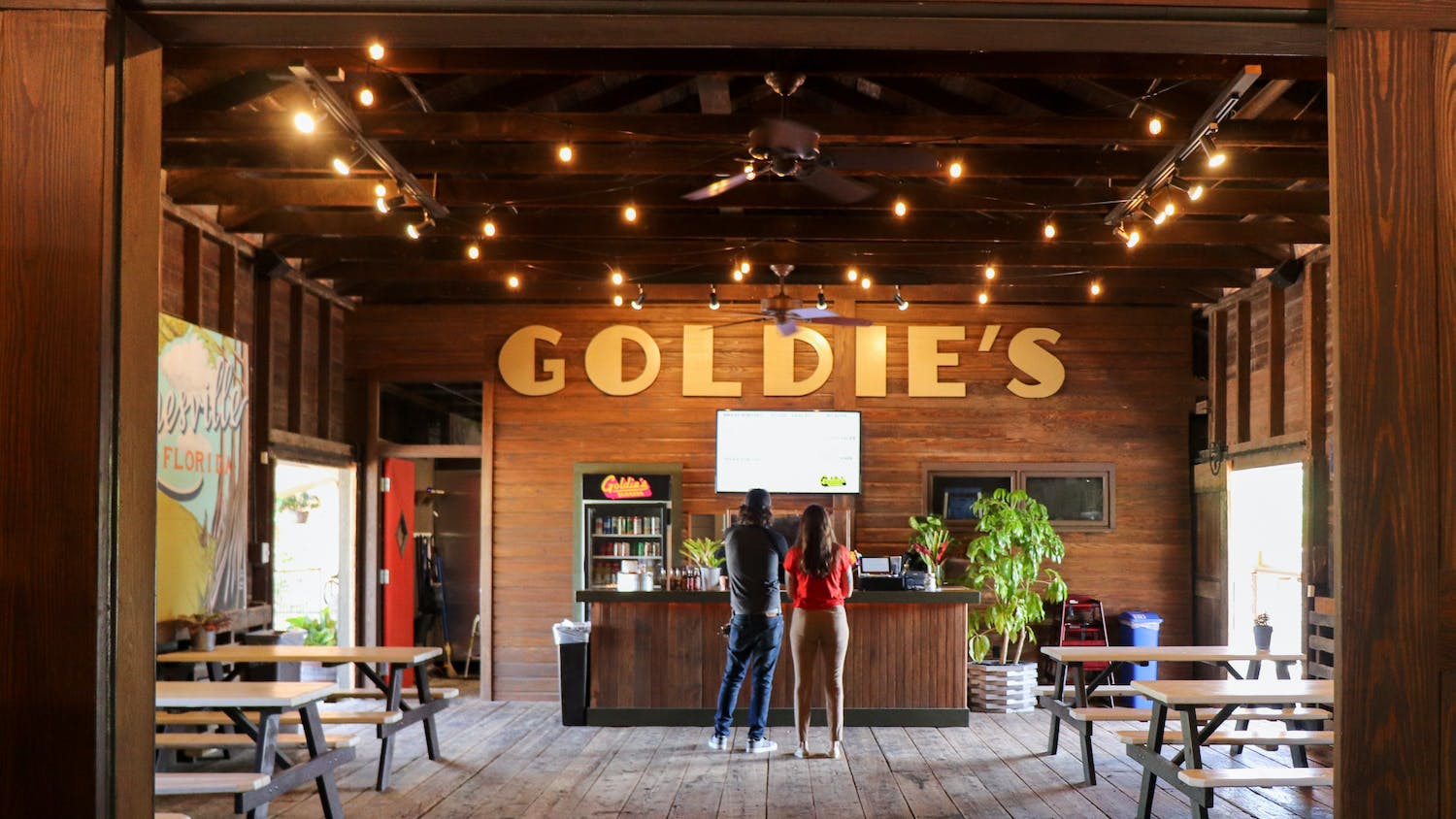 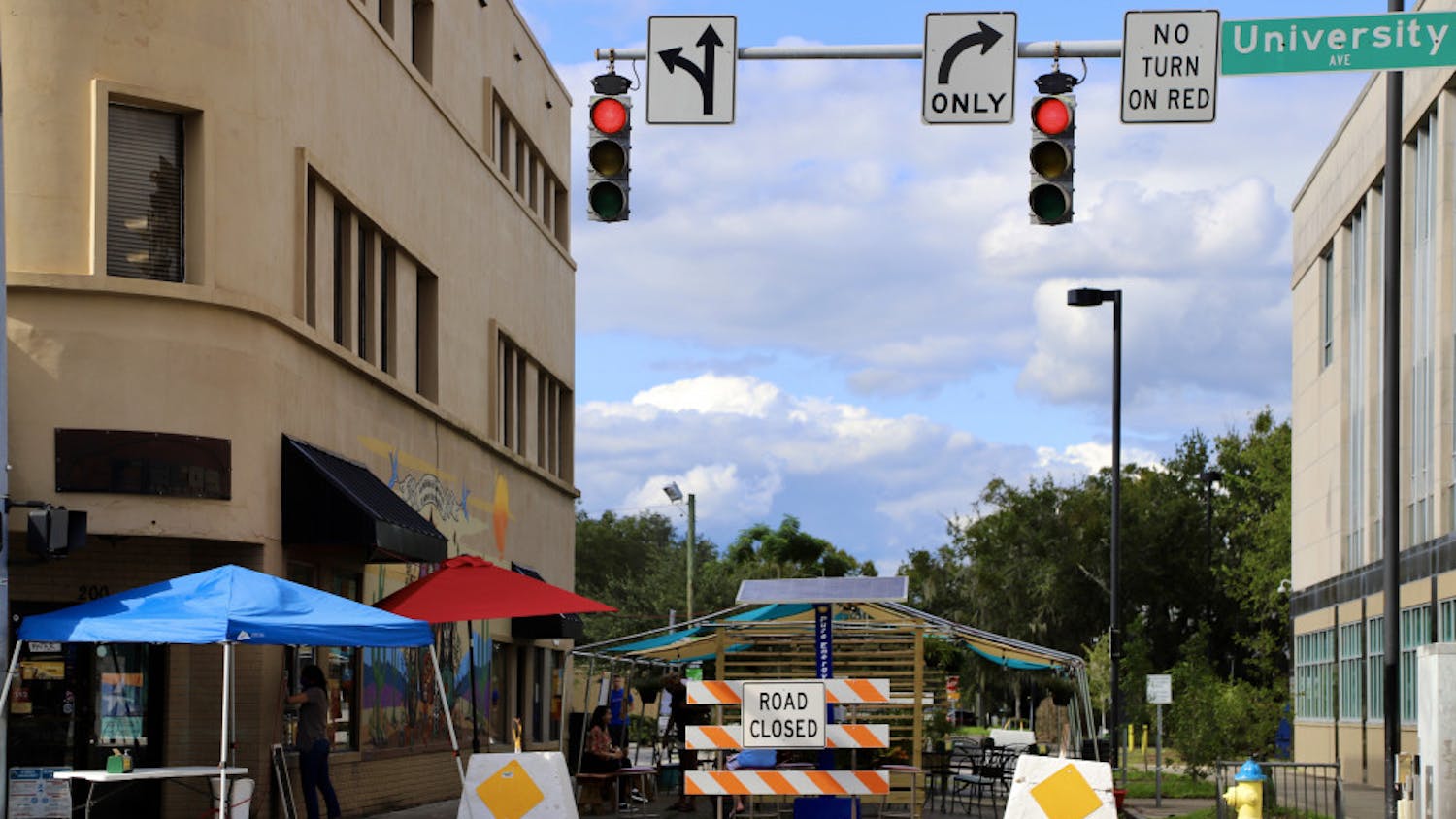 Gainesville restaurants take to the streets 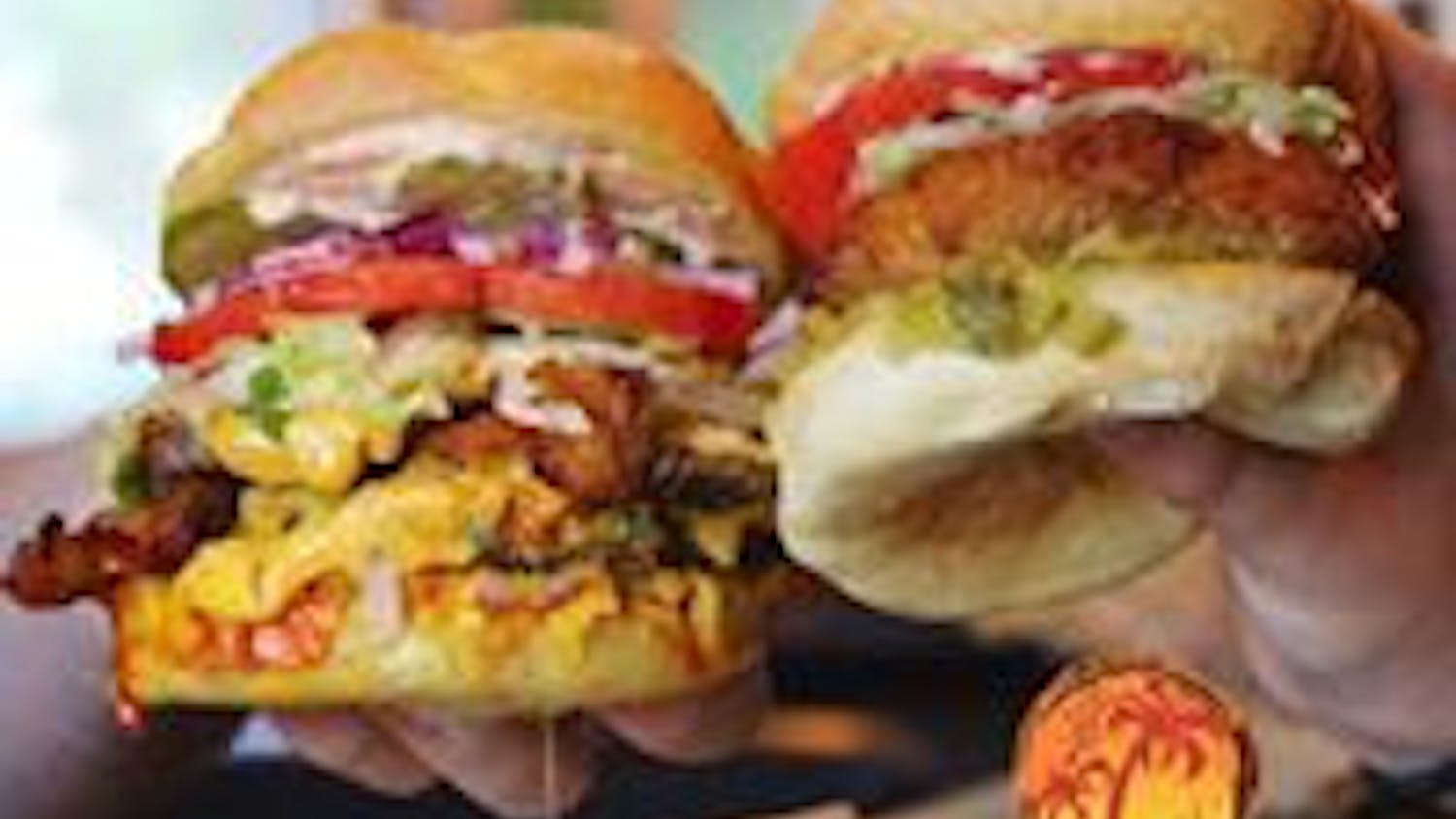