All majors were created equal

When I first learned that my Bright Futures Scholarship — a scholarship that has fully paid for my tuition and fees throughout my first two years of college — was at risk of being taken away, I had been partaking in my innocent daily ritual of scrolling through Instagram aimlessly. As I routinely perused people’s Instagram stories, I encountered a reposted graphic warning me in big bold letters: “Bright Futures is in Danger!”

After reading through the various slides describing Senate Bill 86  — a bill proposed by Sen. Dennis Baxley, R-Ocala, meant to limit funding for students not pursuing majors deemed to lead to direct employment out of college — I was both frightened and angered. I knew immediately the target of this bill: humanities majors. My choice to major in international studies, Arabic language and political science suddenly started to feel more like it could become a burden rather than a benefit.

I reassured myself that SB-86 would not pass, as the harm of potentially affecting over 111,000 students who receive Bright Futures disbursements seemed like a large enough incentive for Florida legislators to kill the bill. Additionally, the overwhelming opposition to SB-86 through a petition with over 124,000 signatures appeared to have enough momentum to stop the bill in its tracks. Even an unlikely ally, Gov. Ron DeSantis, had spoken out that he supported the full funding of Bright Futures.

However, on March 16, I was delivered a rude awakening with the news of SB-86 passing through the Senate Education Committee with a vote of 5-4. I was shocked that SB-86 was able to survive the first committee.

On Monday morning, Sen. Baxley filed a delete-all amendment to the bill that would remove some of these new changes, like the funding restrictions based on program selection. The amendment is a step in the right direction following state-wide outcry, but it’s still imperative to understand the bill as it stands. With the possibility of the amendment being voted down, speaking out against SB-86 is a necessity.

The bill will be heard Tuesday morning by the Appropriations Subcommittee on Education, meaning that Floridians should familiarize themselves with the SB-86 situation, regardless of the outcome.

Primarily funded by the Florida Lottery, the Bright Futures Scholarship — one of the largest merit-based state scholarships in the country — funds tens of thousands of students’ education each year. Bright Futures has two tiers of reward: Florida Academic Scholars (FAS) that pays for 100% of a student’s in-state tuition and Florida Medallion Scholars (FMS) which pays for 75% of a student’s in-state tuition. In order to receive 100% paid tuition, a high school student must keep a GPA above 3.5, score at least 29 on the ACT or 1330 on the SAT, and engage in 100 hours of community service.

SB-86 aims to completely change that reality for a lot of students. Introduced on Feb. 23, the bill creates what resembles a ‘blacklist’ of majors that would receive a reduced amount of Bright Futures funding, due to the program of study not leading “directly to employment.” Additionally, the bill minimizes funding for students who earn college credits in high school through AP or dual enrollment.

The list of majors would be determined by the Board of Governors and the State Board of Education annually, based upon what majors are deemed more likely to lead to more jobs. Currently, we do not know what majors would be on this list, since Baxley refused to provide examples of majors targeted by this bill, out of fear that clarifying would “become the story” instead of “pairing up these pathways.” I hate to break it to Sen. Baxley, but the narrative has always been about punishing students for majoring in what they want rather than what the state determines as valuable.

In order to help soften the blow of SB-86, the bill would create the Florida Bright Opportunities Grant program to provide more funding for Pell Grant-eligible students and the Florida Endeavor Scholarship to help provide tuition funding for students without a high school diploma. Both of these programs would greatly improve higher education, but they should not be implemented at the expense of gutting scholarships for other students.

Naturally, some people have resorted to the idea that SB-86 could save money in the midst of a COVID-19 induced economic downturn. However, Baxley has stated himself that he doesn’t know if “we will save a dime” from this bill. This attempt by the state to overstep its boundaries and dissuade students from pursuing certain degrees isn’t even operating under the guise of “saving money,” which makes matters even more alarming.

Sen. Baxley comes from the city of Ocala, where he held numerous political offices — including Belleview City Commissioner, Mayor of Belleview, 24th District State Representative, and his current title as the 12th District State Senator.

You’re probably wondering, “What is Baxley’s educational background before becoming a state senator?”

Actually, Baxley received a degree in sociology from FSU. Instead of going straight into the workforce with his degrees in hand, Baxley decided to go back to college and get a degree in funeral services.

In fact, in an interview with the Tampa Bay Times, Baxley cited his educational background as inspiration for SB-86 since he believed his degree could only earn him “two bucks and a cup of coffee in most towns.”

The irony of a bill sponsor who wouldn’t even satisfy his own criteria to receive full Bright Futures funding is truly astonishing. But this is Florida politics, where logic tends to be left outside the Senate chamber and on the front steps of the Florida State Capitol.

The glaring issue of SB-86 is the potential to de-incentivize students from pursuing certain majors. This bill essentially creates a hierarchy of majors within universities, propped up by the unequal distribution of Bright Futures funding perpetuated by SB-86, but the consequences don’t stop there.

If SB-86 is passed, the possibility of student loan debt skyrocketing could become a reality. Currently, Floridians hold 3% less in federal and private student debt than the average U.S. amount of $36,689, which has been attributed to programs like Bright Futures assisting students pay their tuition. The passage of SB-86 could raise the average student debt in Florida, as more students will find themselves with a lack of funding.

Bright Futures also helps promote in-state higher education, as more students are incentivized by the scholarship to stay in Florida. For many in-state Gators and myself, Bright Futures has been a main motivation for attending the University of Florida, since it has given us the opportunity to receive a high-quality education at a fraction of the cost. SB-86 has the potential to create a “brain drain” from Florida, as a portion of the state’s best and brightest may be encouraged to pursue out-of-state colleges in the absence of substantial Bright Futures funding.

Another concerning repercussion of SB-86 is the negative impact on underrepresented students pursuing higher education. In the past 20 years, the racial demographic data breakdown for Bright Futures disbursement history has shown a continuing trend of minority students receiving an increased portion of funding. In addition, minority students have been shown to be more likely to pursue a humanities major than their white counterparts. If passed, SB-86 could harm a disproportionate amount of minority Bright Future recipients, which would be a huge step backward in education.

According to U.S. News and World Report, Florida was ranked the top state for higher education, and programs like Bright Futures that fully fund hard-working students’ tuition are part of the reason why. Defunding educational scholarships further will only harm higher education and should be opposed on all fronts.

What You Can Do

The fight to protect Bright Futures may feel like a steep uphill battle, but that does not mean that we are helpless to the whims of self-interest within the Florida State Legislature. In truth, there are multiple ways you can make a difference toward protecting Bright Futures.

The main way to take a stance against SB-86 is to express your dissatisfaction with the bill by calling the offices of the Appropriations Subcommittee on Education members. These nine members hold the fate of 110,000 students in their hands, and their voicemail inboxes should reflect that reality.

In the event that the Appropriations Subcommittee on Education passes SB-86, the effort to protest the bill must be expanded to calling state senators from your district to vote it down. Reinforcing to your local representatives that passing the bill further will be more trouble than it’s worth through constant dissent is the best path forward.

By standing firmly against SB-86, you stand with nearly a million creative and intelligent minds who have been able to utilize their Bright Futures Scholarship to achieve their goals.

Take action today for the students of tomorrow.

Makiya Seminera is the Opinions Editor of The Independent Florida Alligator. 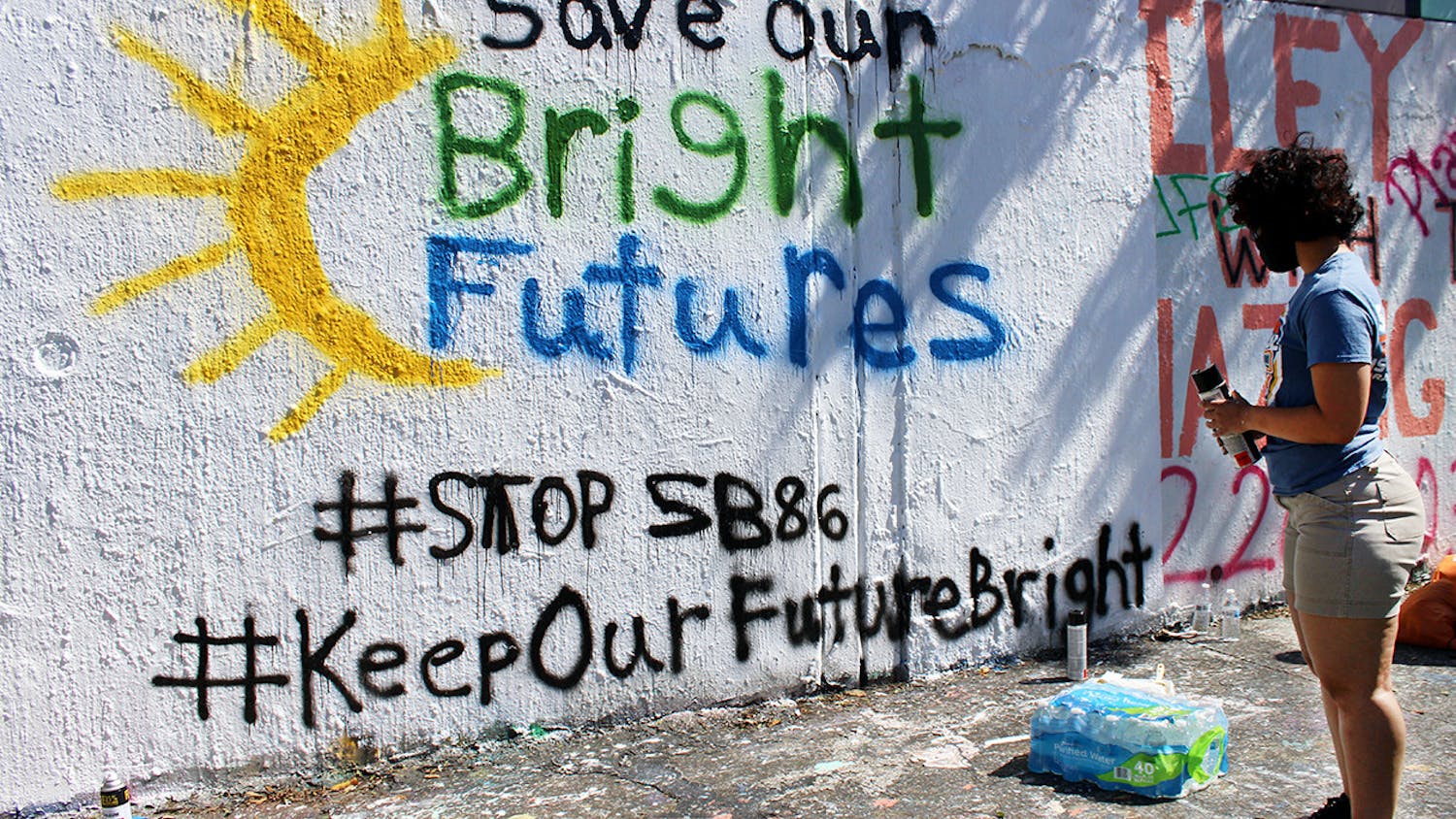