Change Party beat out Gator Party Monday night, gaining a majority of the 50 Senate seats up for grabs in the Fall 2022 Student Government election — a victory that could signal a shift in the UF electorate for semesters to come.

Though Change was five candidates short of a full slate, it won 27 seats in the Fall election, overcoming Gator’s 22-seat grab and reducing its Senate supermajority. Liberation Party didn’t claim any seats.

Change will still maintain the Senate minority caucus with nearly a third of the seats.

Faith Corbett, minority caucus leader and Change campaign manager, said she was worried Change would lose seats rather than gain. Afterwards, she said the Change win was proof that wasn’t the case: Monday was the first time a minority party has won a majority of seats up for election since Change’s inception in 2020.

“It's definitely a moment to celebrate,” she said. “This is unprecedented.”

Gator still holds the majority in the Senate, but Change now holds 31 seats. If Change maintains its momentum, it could position itself for a possible executive ticket win or gain a Senate majority.

Ater her party’s win, Corbett said she felt like she was in a dream. She’ll continue to be a senator after winning Monday. She changed from District D to a more competitive District C seat — a district completely held by Gator senators in Fall 2021.

Change swept Districts C and D, while Gator Party held Districts A and B. Both parties picked up wins across residence halls.

After each result was announced, the winning party erupted in cheers for its candidate. As Change began to win seats back to back, Gator’s energy levels teetered off.

“What was incredible was hearing Gator’s silence more than ours,” Corbett said. “I think it was a perfect description of their complacency in Senate. And seeing them disappointed with these results just shows that they’re not ready for change.”

For Senator-elect Mohammed Faisal (District D-Change), his win this Fall was a reclaiming of the Senate seat he lost in Fall 2021. Before results were announced, Faisal led Change in a chant as party members marched into the ground floor of the Reitz.

“In my Fall freshman year, the minority party won 26 seats,” Faisal said. “I thought that's the best we’d ever get. I was lying to myself.”

“It's been a long ride of people thinking that the minority party doesn't do anything,” McNamara said. “This is just the hardest working group of people I have ever met.”

Senator-elect Jonathan Stephens (District D-Change), won his seat despite Gator issuing a statement ahead of the Fall election calling for him to be removed from Change’s slate for raising his voice in the Senate. The party’s majority victory will allow it to challenge Gator legislation more effectively in the future, he said.

“I think the word of the day is vindication,” Stephens said.

Elizabeth Hartzog, Gator campaign manager, said despite the results, the party’s candidates should take solace in their effort and passion on the campaign. No changes in strategy are currently in the works, Hartzog said.

“It didn’t turn out exactly like we wanted,” Hartzog said. “But look — we gave it our all. I’m so proud of each and every candidate that let their heart out there this week.”

Liberation candidates showed up to the Reitz Union donning Change shirts. The party has been vocal in its support for Change, and it endorsed several Change candidates prior to the election.

Aron Ali-McClory, Liberation president, said the moment was decades in the making. A Change win is a win for his party, too, he said.

“The one-party system is decaying as we speak,” he said. “And massive props to Change Party for nailing the beast.”

Despite the second day of SG voting shifting from Sept. 28 to Monday, students still showed up to the polls for a variety of reasons: to support friends running for office, to push for new SG legislation and to voice disillusionment with policy decisions.

Zoe Silver, an 18-year-old UF biomedical engineering freshman, said she voted because her sorority encouraged her to do so. But she thinks it’s important for students to vote, she said.

Some students didn’t vote straight down party lines. Nelson Calles, a 20-year-old UF English junior voted for the five of the seven Change candidates seats slated for District B, he said.

Calles cast his sixth vote towards Liberation, he said, and his last toward a write-in named after a UF meme account. He preferred to write in a fake candidate’s name than to vote for any of the remaining Gator options.

“They're just manipulative,” Calles said of Gator. “They really do make themselves look like the bad guys. What a lot of students want to do is to see that change of the turning of the tide.”

Calles considered Liberation a “joke” in the past, he said, but he voted for them “just to be nice.” Even so, he and Dinkla said they often disagree with Liberation’s campaign because third parties have split the Change vote in the past, particularly in the Murphree area Fall 2021.

“They both want to make things better,” Dinkla said. “But let's be real about which one could actually win the election though.”

Other voters like Chase Comprosky, a 21-year-old UF biochemistry senior, have been satisfied with Gator Party’s Senate majority and executive administration. He voted for Gator because of his roommate Connor, he said, who’s heavily involved in Florida Blue Key — a leadership group that organizes the annual homecoming festivities.

“Seeing my roommate and how passionate he is about the different things he’s involved in led me to vote for his party,” Comprosky said.

Aidan Newsom, an 18-year-old UF bioengineering freshman said he has friends in Gator, but he’s choosing to vote for them because of its platform, too. Gator, he said, is more focused on the student experience.

Past SG action pushed some voters to contribute to Change’s 27-seat victory.

Olivia Clift, a 19-year-old UF elementary education junior, said she voted for Change because she wanted to see Gator out of office.

She said Gator acts in the best interest of Greek life, which she isn’t a part of, whereas Change wants what’s best for all students. Specifically, she said doesn’t like that Gator brought Donald Trump Jr. to campus in October 2019 and won’t approve more blue lights for fraternity row.

The SG election commission will meet tomorrow at 6:30 p.m. in the Reitz Union to discuss campaign violations. Senate will later vote on the single seat that resulted in a tie — family housing. The seat only had two votes: one for Gator candidate Aubrey Mys and one for write-in candidate Sadia Sarwar. 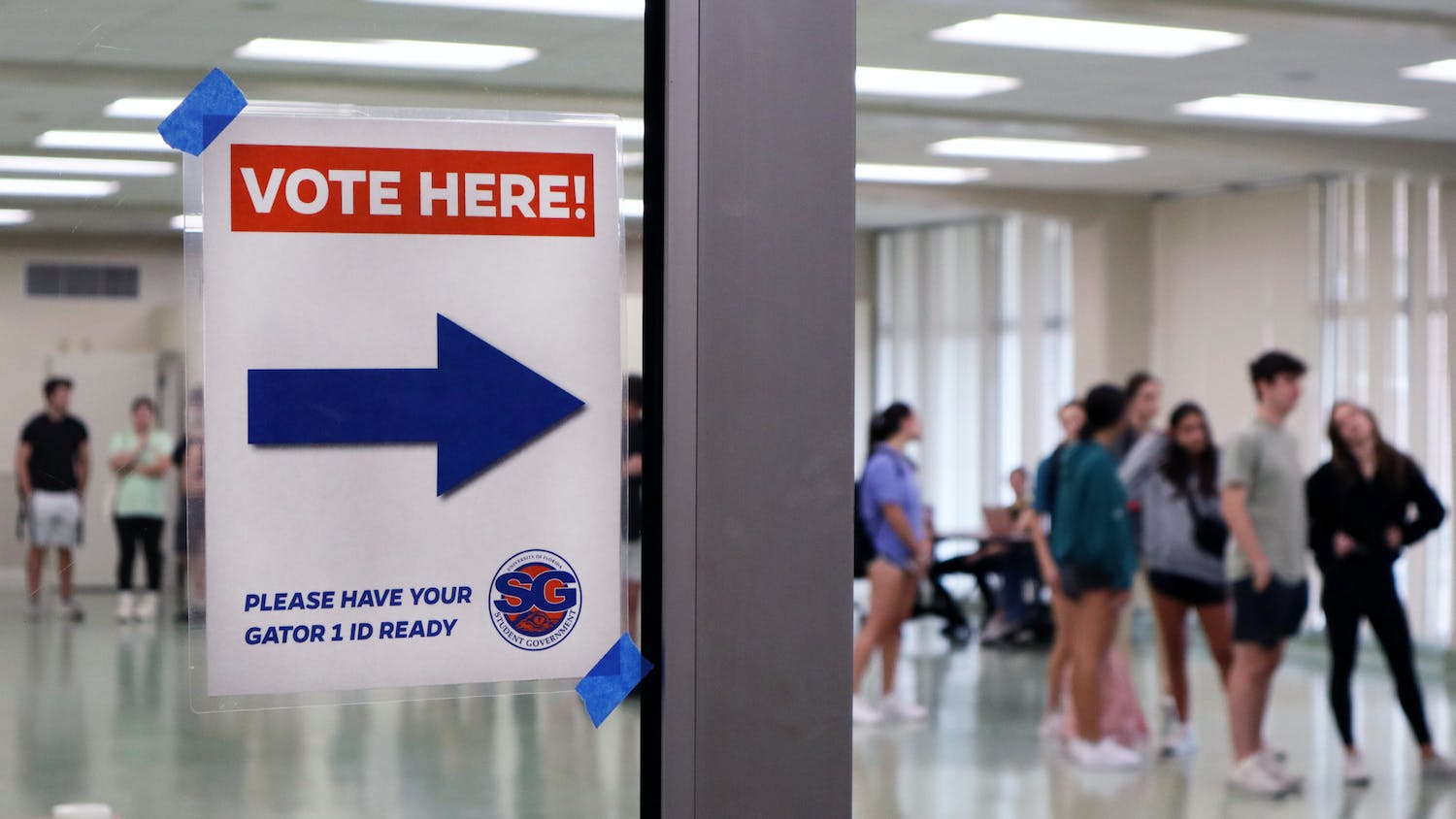