Jonathan Palmer-Gilley's dream job is to one day be a dishwasher at Balls Bar.

But he doesn't really care to dream too much about his future. Palmer-Gilley, known to most midtown folk as "Squirrel," is a living legend already. For him, that is more than enough.

Squirrel reached celebrity status almost eight years ago when he started drawing anime-inspired posters for the Delta Gamma sorority. Today, he plants himself at midtown while surrounding students implore him for a custom-made poster.

A 30-year-old man not much taller than 5-foot-6, Squirrel is the furthest thing from threatening or daunting. Classmates nicknamed him Squirrel in junior high after he climbed the school building to get a ball they hit. He's always been athletic and nimble, so the name stuck.

In 2005, a member of the Delta Gamma sorority saw Squirrel furiously drawing on the massive wooden bar at Balls. She walked up, introduced herself and then introduced him to all of her friends. The girls loved his giant-eyed caricatures around the bar, so he decided to make them a poster. Little did he know, his work would become iconic.

Squirrel spent the afternoons researching the sorority at Library West and learning about its colors and symbols. His first 28-by-22-inch poster depicted Delta Gamma's symbol, a giant anchor, surrounded by colorful caricatures of the girls he met that night. It was an instant hit, and they demanded more.

Word of the posters spread, and suddenly other sororities and fraternities were asking for them. Six years later, students are still begging for a piece of Squirrel's color-penciled artistry.

"No matter what, I am married to the anchor," he said of Delta Gamma, holding his hand over his heart. "They discovered me, and from that day on I have served them."

While some sororities and local bars have one or two posters, Delta Gamma has more than 50. The members are proud of his allegiance and even more proud to call him their friend.

"I always look for him when I go out," said Melina Garcia, a 19-year-old business sophomore and a member of Delta Gamma. "He's very eccentric and very funny. It's flattering that he cares about us and our posters so much. We are very lucky."

Today, when he walks into a bar at midtown, people immediately approach him about his art. He battles with himself about whether he should make posters for other sororities and fraternities. Sometimes girls from Delta Gamma will get jealous, and he doesn't want to anger them. This is the downside of fame - sometimes it weighs you down.

As a midtown celebrity, Squirrel stays faithful to his favorite strip of eateries and bars.

He's never changed his routine. He wakes up, plays Super Mario Bros. on his Super Nintendo until noon and then rides his bike to midtown.

In the afternoons, he'll sit at his second favorite bar, O!O Garden Grille - second to Balls, of course - and drink Sprite with a splash of grenadine, topped with maraschino cherries.

If night falls and he feels like getting drunk, he'll switch to a vodka and cranberry juice, a stereotypical girly drink, but Squirrel doesn't care. It is his favorite; local bartenders know this and will give it to him for free.

Every waitress at O!O greets Squirrel as she walks past him. They all know him. Courtney is one of his favorites. She gives him extra cherries. For this, her character is centered on the poster he drew for the bar and restaurant.

"I have a degree in Mario-ology," he said as he slurped through the ice of his almost-empty glass. "Well, it's fake, but I took the quiz online and became an expert."

Squirrel graduated from high school in 2000 but never went to college. He didn't want to have to pay off loans or spend money on textbooks. The Mario-ology degree is much more beneficial in his mind because it makes him happy.

He knows every Super Mario Nintendo game ever made. His artwork is based off the way the Nintendo characters look: colorful and blocky, like outdated video-game cartoons.

In the mornings, he'll play Mario Bros. 3, his favorite game, on his 1980s Super Nintendo console that is housed in his family's apartment off Archer Road.

Squirrel lives with his 76-year-old grandma, who supports him and his adopted brothers and sisters. When she's not living with his aunt in Williston, his mom lives there, too.

When he was 11, Squirrel was put into foster care because his biological mother couldn't take care of him. She was a drug addict.

Though he's a fan of alcohol, Squirrel said he won't touch drugs.

"I have no memory of her - what she looked like, who she was," he said, shutting his eyes and shaking his head. "The only memory I have is my birth certificate."

At 12, after spending a year with his adopted family in his home state of Connecticut, the clan, headed by his grandmother, moved to Gainesville.

Now, Gainesville is home, and although he loves his grandmother, mother and adopted brothers and sisters, he considers that lively strip of bars and those who go there family.

A loner at heart, he likes that he can relax by himself at the bars during the day, but it's the bustling streets at night that he lives for.

He went into the small, run-down bar one night, made friends with the bartenders, drew on the dilapidated tables, danced by the doors and that was it. He had found a new spot, one where he could be himself and make new friends. Suddenly, being there was the only thing that mattered, and people began to notice.

"Because of the way he dresses and because of his color, he is stereotyped," said Dustin Gordon, manager of Balls and one of the first guys to befriend him. "Yeah, it's asinine, but it's what we do. I did it, but then I got to know him, and now he is one of my best friends."

Gordon, 25, is the reason Squirrel can get to and from midtown every day. He pooled some money together a few years ago and bought his friend a bike. Squirrel couldn't afford one. It's red with a silver duct-taped seat, and it's locked on the bike rack every day across from the Swamp Restaurant until 2 a.m. when he rides it home to bed. Not only does Gordon help pay for his art materials, but he also lets Squirrel clean the bar after it closes. Lately, Gordon has even let him keep watch at the door. Though he's not an official bouncer, Squirrel guards the door, sporadically standing straight-faced with arms crossed but mostly dancing to the jukebox.

"He just wants everyone around him to enjoy themselves and be happy," Gordon said.

Mid-afternoons, Squirrel goes to Library West on campus to draw his creations, using only colored pencils. Sometimes he'll peruse Facebook on the computer. Most of the time he'll have a new notification about a picture someone tagged of him dancing or posing with groups of women the previous night.

Women eagerly line up around the bar to say hi and take pictures with him. This is the upside of fame - you get a lot of love.

When he's finished at the library, usually around 5 p.m., he'll scurry back up to midtown, artwork in hand, and wait for the night to arrive when he can unveil his newest creation, which he usually doesn't charge for.

As far as pursuing art in the future:

"I fear that if I go to school for drawing or do it for money, I will lose my love for it," he said.

He hopes his dishwashing position at Balls eventually will become an official one.

This way, he would get to be alone, but, at the same time, he would be surrounded by the places and people he loves most.

"It probably won't get you nowhere," he added. "But it makes me happy."

Jonathan Palmer-Gilley, aka Squirrel, a popular frequenter of midtown, is known for video-game-inspired posters he draws. 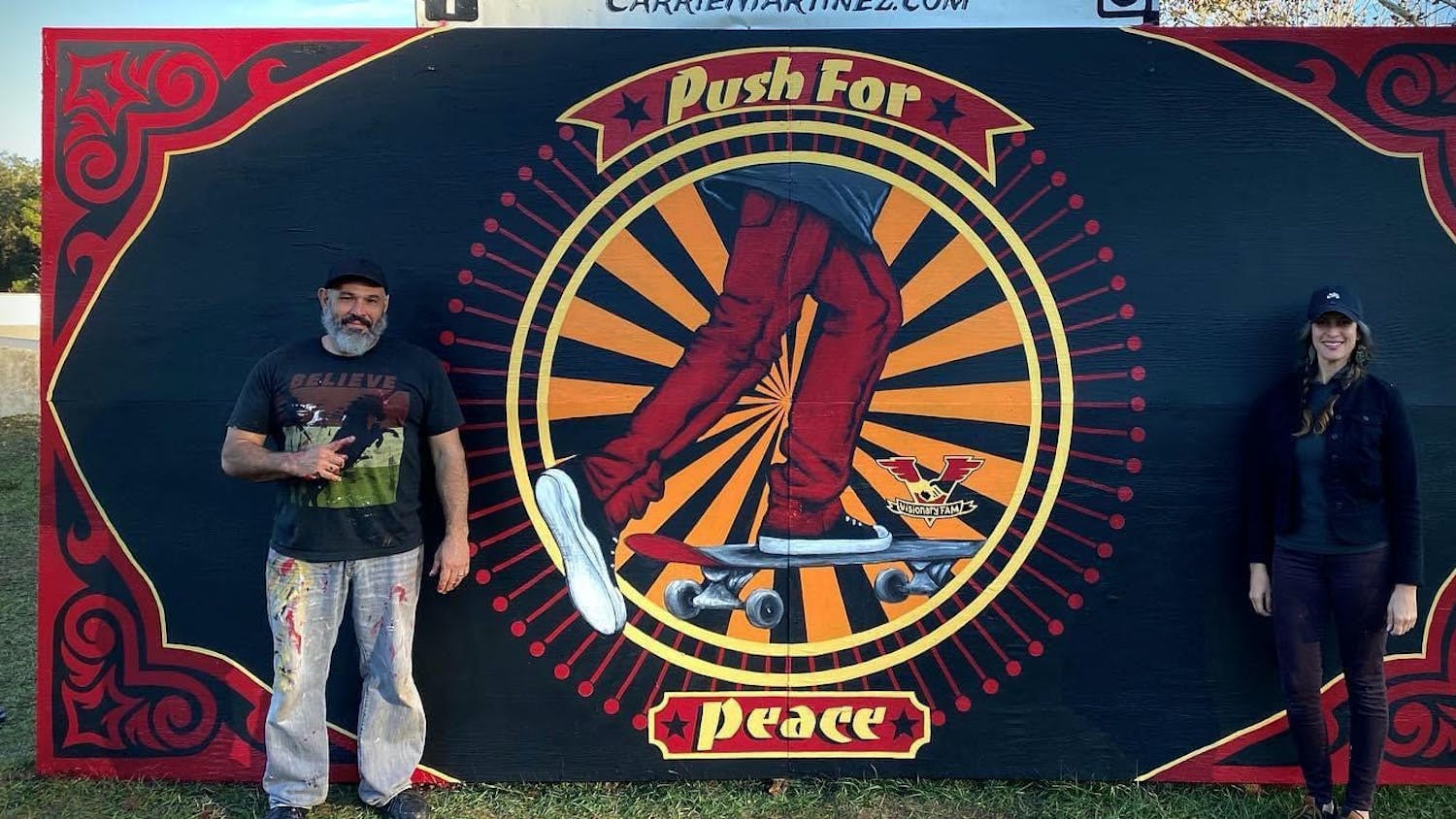