For 2-year-old Emmy Ehrlich, Saturday was the perfect day to go bananas.

Emmy, with her monkey doll in hand, explored Jungle Friends Primate Sanctuary, at 13907 N State Road 121, during its sixth annual Monkey Day. Emmy, her family and more than 100 other people came out to peek at the primates.

Scott Ehrlich said his daughter was excited for the event because she is in love with monkeys.

“I think ‘monkey’ was the third word she said,” Ehrlich said.

This was the only day of the year that guests could visit the sanctuary, said Brianna Fried, the event’s coordinator. Monkey Day is for donors to see how their money helps care for more than 300 monkeys and to raise awareness of the sanctuary in the community.

“This is for people to see their impact on the monkeys’ lives,” Fried said.

The event cost about $1,500 to put on, Fried said. This money came from grants and donations, which is the sanctuary’s only source of income. The sanctuary kept the cost of the event low because it doesn’t use donations that could be spent on the monkeys, but the event raised $3,613 in new donations, Fried said.

The money will go toward the care of 26 squirrel monkeys that arrive at the sanctuary Tuesday and toward rescuing more monkeys from lab research, Fried said.

The incoming squirrel monkeys are the first animals the U.S. Food and Drug Administration has released to a sanctuary instead of euthanizing, said Max Polyak, the sanctuary’s on-site veterinarian.

“Before this, every science-tested animal ended in killing,” he said. “Now they get to live the rest of their lives in a neotropical bliss.”

Flora Freer, 11, donated an extra dollar at the event to toss walnut snacks into the enclosures. Her favorite was the baby spider monkey, Rico.

“He was tiny, and tiny things are cute,” she said.

“He’s already picking up natural behaviors that he didn’t have when he first got here,” she said. “He’s already catching bugs. It’s amazing.”

Flora came to Monkey Day with her grandmother, Debra Freer, who had a pet spider monkey as a kid, which she ordered from a magazine. She said her monkey’s name was Spike, and she gave him to a rescue facility when she moved.

“This event brought back memories,” she said. “They are such intelligent animals.”

Cosmo, a capuchin monkey, watches tour groups walk past its cage during the Monkey Day event Saturday afternoon at Jungle Friends Primate Sanctuary. About 300 monkeys live on the sanctuary's 40 acres of land. 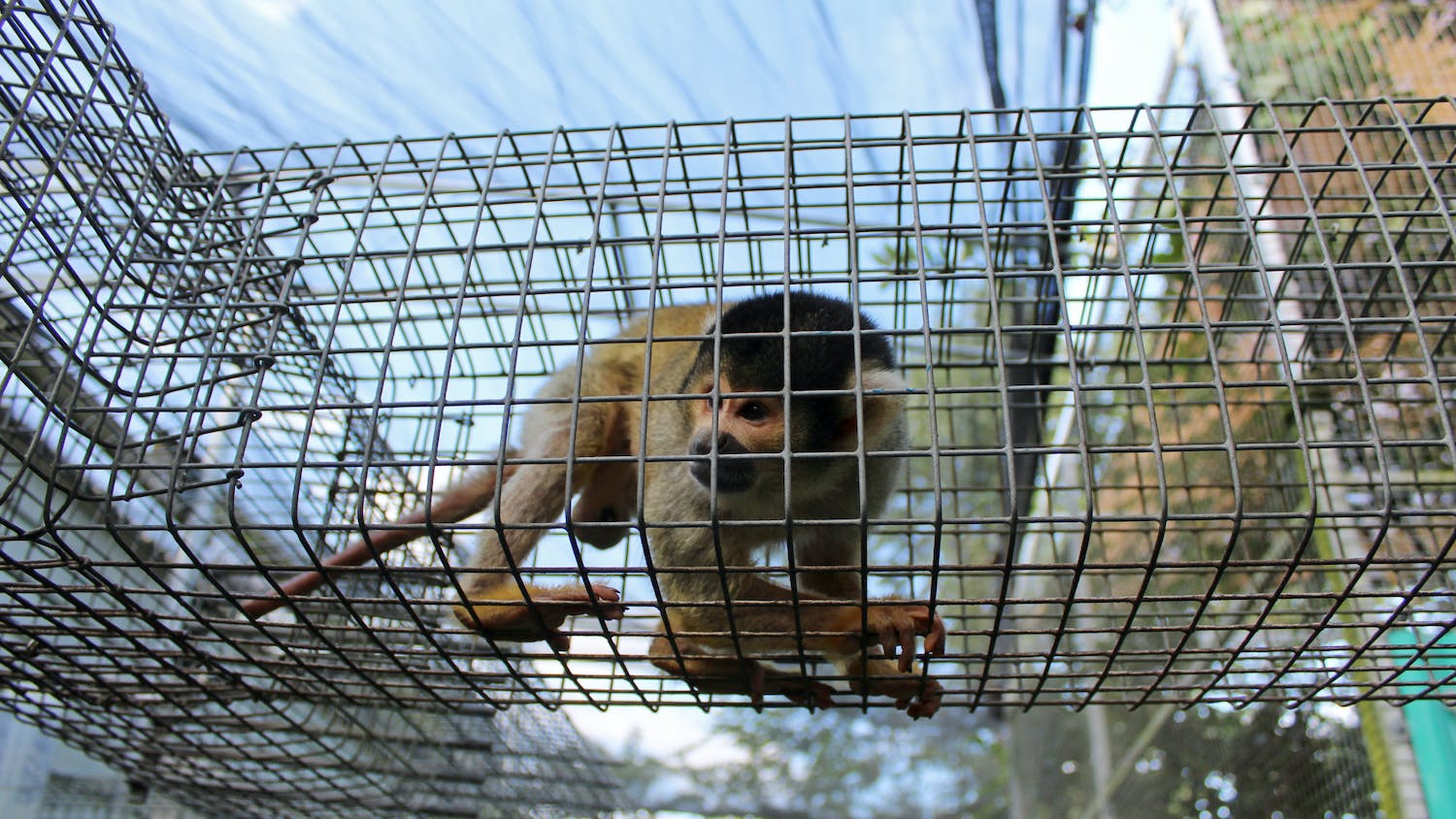