More than 70 people crowded into a Santa Fe board meeting to protest the work conditions, wages and lack of benefits for adjunct professors on Tuesday.

The Board of Trustees meeting in boardroom S-322 overflowed with board members and protesters at Santa Fe College. Adjunct faculty and supporters protested on behalf of their rights to form a union at the meeting, which began at 4 p.m.

The board allowed 15 minutes for people to voice their concerns. Five people spoke during this time, including County Commissioner Ken Cornell.

Protest organizer and Santa Fe College adjunct professor Glynn Hayes, 51, spoke first on behalf of the faculty. He has taught biology and earth science at the college for 10 years without benefits or a secure contract.

“We find it disheartening and concerning that the administration has made efforts to block adjuncts’ democratic right to vote for a professional union,” he said.

Hayes said in an interview following the rally he and his peers filed to have an election to form a union in December. The college hired a law firm to block the election because the adjuncts did not have enough showing of interest.

At least a third of adjunct professors had to provide their signatures in order to file for the union, which is what they did, Hayes said.

The contract between the union and the college is bound to a legal process expected to end in the middle of June, Anderson said.

“The two parties themselves, the adjuncts and the college, can’t really say too much one way or another,” he said. “That is the issue that should be resolved by the middle of June, and then both sides can move forward with what the next steps are.”

Nicole Nesberg, another adjunct professor who spoke to the board, said she has taught at the college for 13 years. She said loves her job, but struggles with the lack of benefits it provides. She said her and her colleagues can make a maximum of $24,000.

“I have two children over there,” Nesberg said, pointing to her kids sitting in the front row. “I need to make more than that. I need healthcare. I need sick leave. I need something better after 13 years of service.”

She continues to teach because of the impact she’s made on students’ lives, she said. She recalled a moment last year when a student told her they were going to quit college until they took her class.

“That’s why I stay, because I make a difference, and I deserve to support my family by making that difference,” Nesberg said.

After the 15 minutes of public dialogue, the Board of Trustees chair Lisa M. Prevatt said the college could not work directly with adjunct professors concerning wages, hours and working conditions right now.

“We just need to be patient while we see what happens at the administrative proceedings,” Prevatt said. “So if ultimately the petition is dismissed, then we will be glad to work directly with you.”

Protesters moved outside building S after this announcement to allow more faculty and supporters to speak about their thoughts and experiences.

Sasser said the contract, between the college and the Service Employees International Union, ends in the middle of June, and he would love to have the meeting again to talk about the next step.

“If the numbers are there, then I’m not opposing the union,” he said. “But I do agree that our contract, which is what we’re in now, needs to be honored.”

Emilio Bruna, a 72-year-old adjunct professor of economics, addresses President Sasser from the crowd of protesters Tuesday afternoon. Bruna has taught at Santa Fe College for 8 years and works the maximum amount of hours allowed for adjunct professors. He voiced his frustration over the treatment of part time professors at the college despite their good evaluations and suggested that it might be time for the adjunct faculty to strike. “He hasn’t done anything,” Bruna said about President Sasser. “I’ve talked to him many times, but it’s enough talk.” 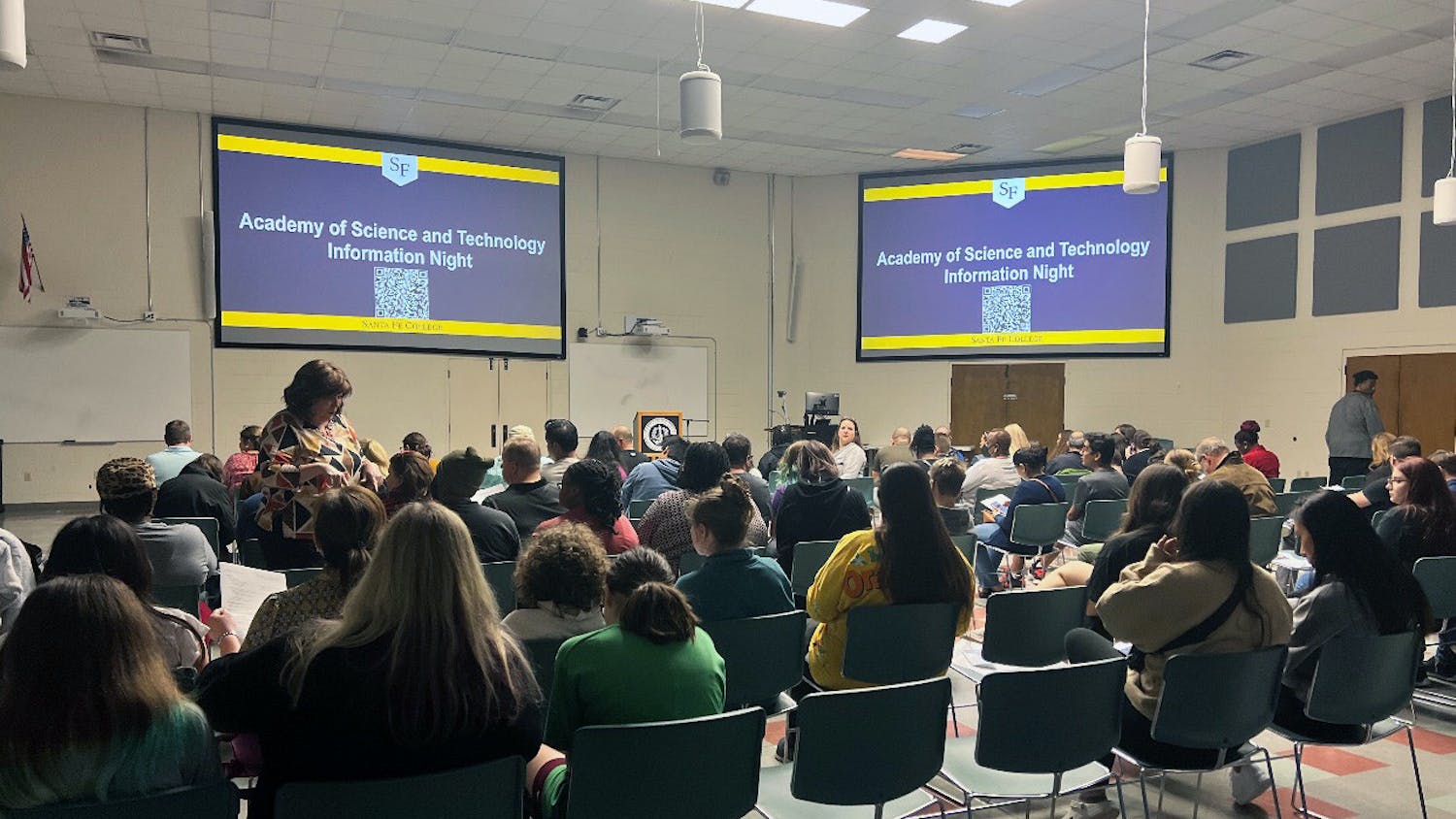