Gharakhanian played early iterations of the game with his brother before discovering its competitive gaming scene. In 2015, he began to attend local tournaments while going to college in Boston.

Now, the 22-year-old, who competes under the name “Cagt,” has a bigger role within the grassroots Smash Bros. scene; he acts as the head tournament organizer for most Gainesville events.

Gainesville is home to a free weekly tournament series titled the “Gainesville Stock Exchange.” The local community meets nearly every Friday night in Turlington Hall to compete, improve, socialize and ultimately see who the best player in Gainesville is.

At the center of this community is Gharakhanian, who quickly became the community figurehead of the region. He voluntarily organizes and operates weekly tournaments, advertises the events and even helps coordinate local players travel to other regions.

Gharakhanian moved to Gainesville in January 2019 after taking a job at Duo Studios, a production company that focuses on esports. At the time, the Gainesville competitive scene was in a lackluster state.

“At the end of ‘Smash 4’ the Gainesville community was pretty small,” Gharakhanian said. “The game wasn’t very popular. The weekly events were not very big, and there were not a lot of active players.”

Luckily, Gharakhanian’s move coincided with the release of the newest version of the series, “Super Smash Bros. Ultimate,” giving him a great opportunity to expand the scene.

“When “(Smash) Ultimate” came out, the scene completely blew up. We had over 160 players for our first weekly (tournament) in January.” Gharakhanian said. “We had over 100 players every week for the entirety of the spring semester.”

The community continued to grow throughout the summer, culminating on Aug. 30 with the Gainesville Stock Exchange 100, the 100th rendition of the weekly tournament.

“It’s a celebration of the Gainesville scene and how far it has come,” Gharakhanian said. “We’re coming together and celebrating the community.”

The tournament featured a mixture of the best players in Gainesville, more casual local players, and competitors who visited from other regions across the state.

Free for all to enter, the players competed in a 256 person bracket for pride and a share of the $200 pot bonus.

One of those entrants was Ryan “Poet” Erikson, a 19-year-old UF electrical engineering sophomore.

Erikson began playing Smash Bros. competitively five years ago and is considered one of the best players in Gainesville.

Erikson plays as Pac-Man, a character he enjoys because of his unique and strategic style of play.

“You can kind of make a puzzle, and if your opponent can’t figure out the puzzle you win the game,” Erikson said. “I play fast, but my overall gameplay is really slow. I try to figure out what my opponent is doing and tactically punish them.”

Shortly before attending Gainesville Stock Exchange 100, Erikson had competed at Super Smash Con in Chantilly, Virginia. Erikson had placed 129 out of over 2,700 entrants, higher than he was expected to finish.

While at the event, Erikson managed to have a match on the Smash Con tournament live stream. He completed a unique combo that managed to go viral within the community.

“I hit a really cool combo, and it was the most popular clip on twitch for four or five days,” Erikson said. “I’m still riding the high of that.”

Erikson rode this momentum to fourth place at Gainesville Stock Exchange 100, losing sets to both the second-place finisher and eventual tournament winner.

Andre “Wonderbread” Parrales, 20, grew up in Gainesville and found the local Smash Bros. scene through watching a live stream of a weekly tournament during his sophomore year of high school.

“I was watching the stream and noticed the layout said Gainesville, Florida,” Parrales said. “I looked up Turlington Hall in Google Maps and realized I could walk there.”

Parrales began regularly attending the weekly ‘Smash 4’ tournaments, and eventually got a sponsorship to play in tournaments across the country, including the world's largest fighting game tournament, the Evo Championship Series, in Las Vegas.

Since the release of “Smash Ultimate” Parrales has struggled to achieve the same levels of success. His has had to learn to play a new character and adapt to new mechanics, all while working and living on his own for the first time.

Parrales said upon the release of “Smash Ultimate” he thought the mechanics of the game were very similar to “Smash 4”. As time passed, he began to notice more profound differences between the games.

“At first, I didn’t think they were that different. As time has gone on, I have seen more and more changes that I don’t necessarily agree with,” Parrales said. “There’s a lot of poor mechanics in the game I think need to be addressed, and they just aren't by the (development) team. But, it’s a fun game, it was easy to jump into.”

Parrales said he is looking forward to the future. Going into 2020, he wants to attend more large national tournaments, including Evo. He ended his Gainesville Stock tournament run in 13th place, falling to the eventual ninth-and fifth-place finishers.

While Gainesville is home to a large amount of competitive players striving to be the best, many come out to socialize and have fun.

Colby Lathrop, a 21-year-old UF computer science student, started coming to Gainesville Stock Exchange events two years ago after some of his friends found the group online. He considers himself a “casual-competitive” player.

“I’m not grinding the game like a lot of people here, but I’m trying hard and having fun in the process,” Lathrop said. “If I get better, I get better.”.

Lathrop said his best experiences at Gainesville Stock exchange tournaments have not been the games he has played, but rather the people he has met.

“I’ve met a lot of people that I consider to be good friends here. It’s good to get out, talk with a bunch of people, hang out, have fun,” said Lathrop. “Even if I go 2-2 at the end of bracket, I still hang out towards the end because all my other friends are here.”

Ryan Erickson, a 19-year-old electrical engineering student, plays Super Smash Bros. Ultimate Friday night during a tournament held in Turlington. Erickson, who goes by the gamertag “Poet,” is one of Gainesville’s top competitive Smash players and is currently ranked as the 4th best player in North Florida. He has competed in local, statewide and nationwide tournaments.

Sajhmori Dunn, a 24-year-old UF aerospace engineering alumni, plays Super Smash Bros. Ultimate with Brock Hubbard, an 18-year-old Santa Fe student studying plant biology, Friday night. Hubbard said he enjoys playing because it makes competitors think about their moves. “You really have to read your opponent,” he said. Dunn, who said he has been playing competitively since around 2008, said he believes the trick is to keep mashing buttons “until you get good at it.”

Tucker Felts, 23, plays Super Smash Bros. Ultimate Friday night. Felts, a UF psychology alumni, said he has been going to Smash tournaments since he was a freshman. “I’m buddies with everyone here,” he said. 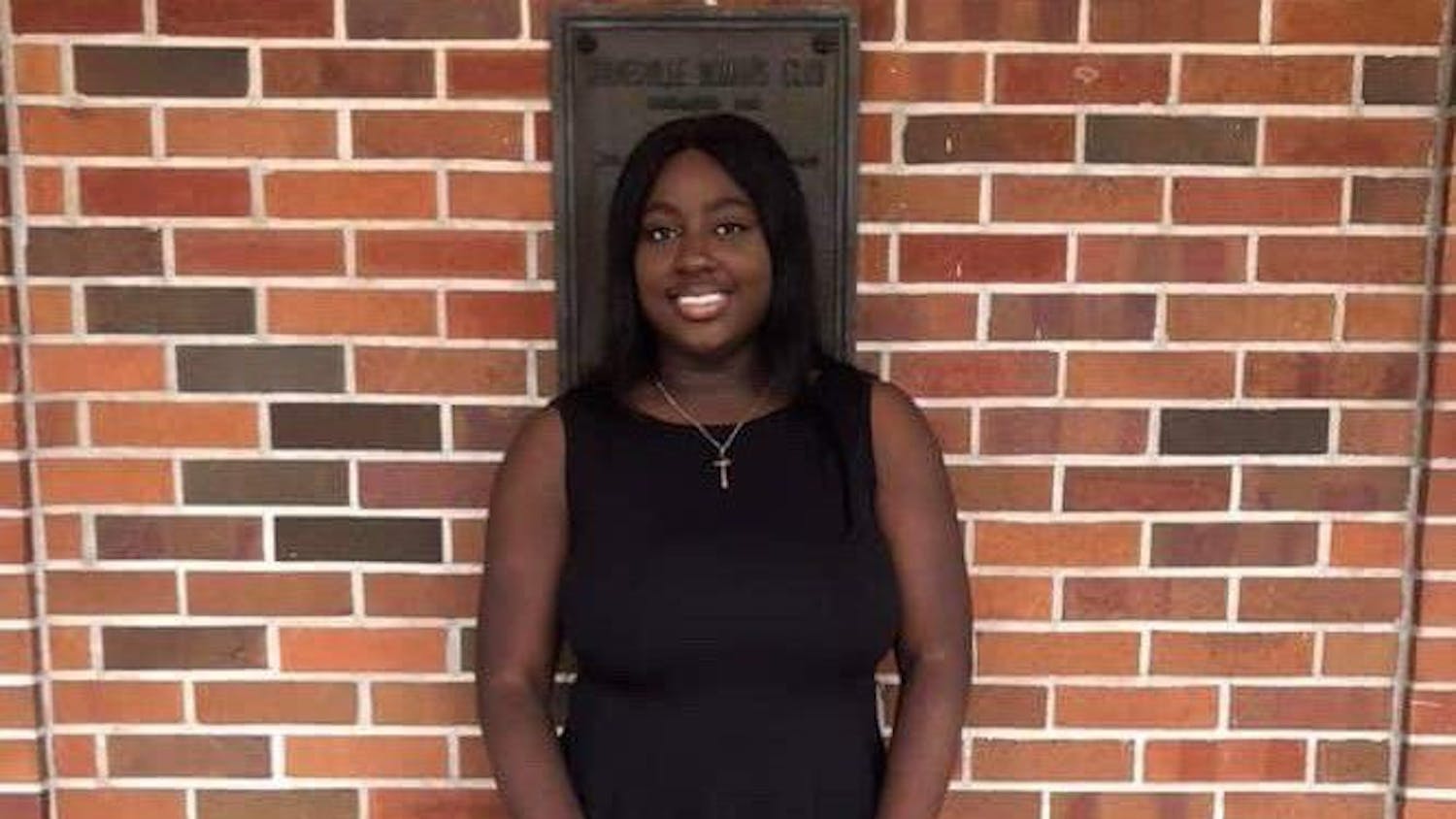