'A skeleton in Florida’s closet': The Johns Committee’s history at UF

The year was 1958, and while other students were worrying about class and their lives off campus, UF sophomore Art Copleston was in the University Police’s basement.

A single lightbulb hung by a string over a wooden, four-legged table with a tape recorder placed in the middle. Blinds covered the windows, and two UPD officers sat with Copleston.

A UPD officer said he knew Copleston was gay. Then, he ordered the student to tell him the names of everyone that he knew on campus who was gay.

Copleston said he sat there for hours that day, and was brought back to that room four or five more times. If the officers could prove that he was gay, they told him, they could kick him off campus.

UPD officers interrogated him and other students and professors as part of a series of targeted attacks on LGBTQ+ people. The Johns Committee, created by the Florida Legislature to investigate communist connections to civil rights movements, orchestrated these attacks. It operated from 1956 to 1965 and was supported by then-UF President Julius Wayne Reitz.

The committee terrorized the LGBTQ+ community at public schools across the state, leading to an exodus of at least 15 professors and 50 students from UF and impacting many more across the region.

Churchill Roberts, a professor in the UF department of telecommunication, oversaw the creation of “Behind Closed Doors,” a documentary about the Johns Committee at UF. The Alligator spoke to him and Steven Noll, a UF master lecturer who teaches Florida Since 1845, to learn more.

The Johns Committee, formally known as the Florida Legislative Investigation Committee, was led by Florida Sen. Charley E. Johns, according to Roberts.

Initially designed to locate communist ties to the Florida NAACP, the committee switched gears in 1958 to investigate LGBTQ+ students and faculty in Florida public schools. It investigated universities like UF, Florida State University and the University of South Florida, Roberts said.

In many cases, UPD forcibly removed students and faculty from class and interrogated them without a legal representative present. Interrogators threatened to expose their sexual orientation during a time when “exposure would mean social death,” Noll said.

At the time the committee was at UF, Reitz did not stop the committee’s acts. He needed money from the state to develop the university, Noll said, and the Johns Committee was a state committee. He also believed that being gay was a major problem in American society.

In a 1988 interview, Reitz called anyone who was gay “a complete aberration.” He also communicated with Johns through letters, thanking the committee for its work.

In 1964, the Johns Committee published “Homosexuality and Citizenship in Florida,” which was often known as “the purple pamphlet.” It aimed to inform readers about the “scope and nature of homosexuality” to later “effectively deal with the growing problem.”

Following the publication of the pamphlet, the Johns Committee lost credibility, Noll said. It disbanded in 1965.

The Johns Committee is well documented at UF’s libraries, and its history of persecuting the LGBTQ+ community at UF cannot be repeated or forgotten, UF spokesperson Steve Orlando wrote in an email to The Alligator. Today, UF recognizes the need to improve the campus culture and environment so all people feel safe, welcomed and valued, he wrote.

“The Johns Committee represents a painful and tragic chapter in the history of the state of Florida and the University of Florida,” he added.

Organizations on campus have addressed the Johns Committee’s history at UF, including LGBTQ Affairs. Its history recognizes the committee leading to the dismissal or resignation of faculty and students. It also recognizes that Reitz cooperated with the committee.

Director of LGBTQ Affairs Tiffany Richards declined to comment on LGBTQ Affairs’ history, or the fact that its office is held in the Reitz Union, a building whose namesake supported the committee. Graduate assistant of LGBTQ Affairs Logan Neser did not respond to The Alligator’s emails or calls.

Florida State Senator Lauren Book wrote a resolution late last year asking state legislators to acknowledge the injustices the Johns Committee caused and apologize to the victims of the committee. The bill failed March 14 in the Senate’s Committee on Governmental Oversight and Accountability.

Matthew Barocas, a former UF Student Government senator, helped write a resolution for SG asking the Office of the University President and the University Police to issue an apology to professors and students who were fired, removed or interrogated by the Johns Committee.

The 21-year-old UF history and political science senior learned about the Johns Committee after he took Noll’s history course, Florida Since 1845, in his freshman year, he said. Two years later, he wrote the resolution after seeing a video produced by Vox about the committee.

Apologies from the university would help LGBTQ+ and Black students feel more comfortable on campus, he said. It would also acknowledge that what the Johns Committee did was wrong.

“My ultimate goal has always been just an institutional acknowledgement of wrongdoing and hopefully an apology, too,” Barocas said. “I’m a gay student, and I would just feel slightly more comfortable at UF.”

The Judiciary Committee, which decides the non-budget bills that Senate votes on, postponed the resolution twice during Fall. This led to the resolution automatically failing.

Branden Pearson, Judiciary Committee chair at the time, motioned to vote on the bill the second time the committee heard it, he wrote in an email to the Alligator. However, his motion did not pass.

Pearson wrote that he could not speak for why the other members of the committee decided to postpone the bill. Other members of the Judiciary Committee at the time did not respond to the Alligator’s request for comment about why the bill failed.

Other students have gotten involved with informing others about the Johns Committee, including UF adjunct lecturer Bienvenido Torres’ Drag Race & LGBT Communications class.

The class created an Instagram page to inform students about the Johns Committee and to initiate change, UF advertising Spring graduate Ingrid Wu wrote in an email to The Alligator.

UF needs to address the committee’s actions through an apology backed by action, Ingrid wrote.

“When we're telling our peers and friends about the topic, they are so shocked to find out that these events took place,” Wu wrote. “It truly has been swept under the rug and not talked about for decades.”

Copleston, who was investigated by the Johns Committee, said he didn’t think an apology would help him because so many years have passed. Instead, he wants to see positive change on campus, like having a building named in honor of all the students and faculty who left UF because of the Johns Committee.

“This will be a good thing if it is carefully done with the focus of helping current gay students feel comfortable about themselves, in their own skins, in their own lives,” he said.

Copleston graduated from UF in January of 1961 with a degree in industrial management. The morning after graduation, he fled to Boston to start a new life and job, he said.

“There was that feeling that I had won the game,” he said. “But the overriding feeling was to get the hell out of Gainesville as fast as I could make my car go.”

Copleston visited UF for the second time since graduating to participate in former UF student Allyson DeVito’s documentary, “Behind Closed Doors.” DeVito co-produced the documentary in 2000 as a final project for her masters degree in mass communication through the Documentary Institute program, which was co-directed by Roberts, she said.

During the documentary, Copleston visited his dorm where the committee planted a fake roommate to try and get Copleston to admit he was gay. The roommate would walk around naked to try and entice Copleston to do something gay and catch him in the act, DeVito said.

It took DeVito more than a year to research and put the documentary together, she said. DeVito used Smathers Library to find letters between Reitz and Johns before the committee was formed, showing that the two were friends, she said.

She also found transcripts of the interrogations from State Archives in Tallahassee. There, she was able to track down previous UF students who had been interrogated by the Johns Committee, including Copleston.

Having people who were directly involved and were able to share their feelings of what had happened helped the documentary come to life, DeVito said, because it was crucial to telling a powerful story.

“It was almost like I was uncovering this piece of history that no one had talked about in 30, 40 years,” DeVito said. “I remember thinking to myself, this is definitely a skeleton in Florida’s closet.” 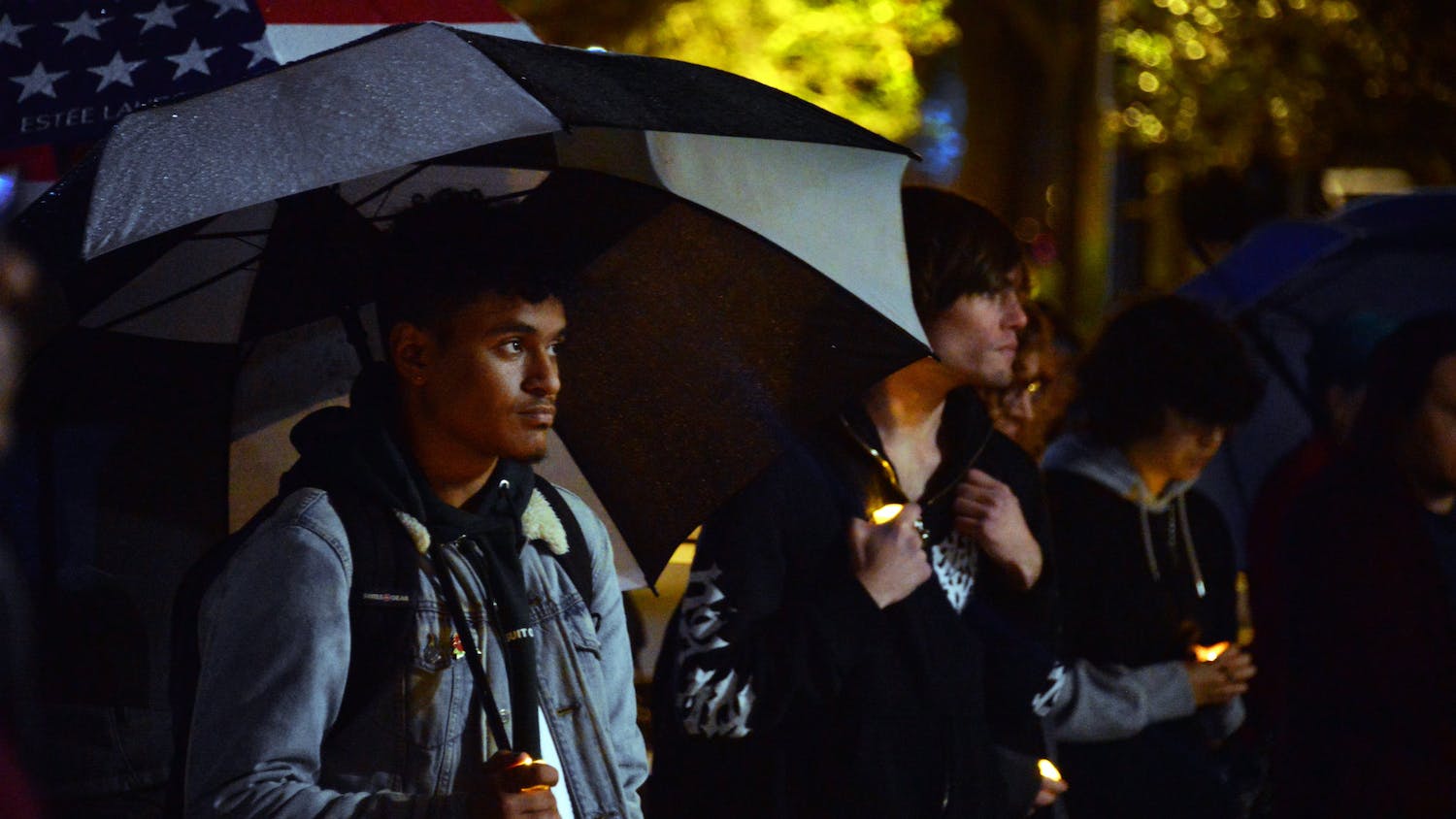