How Florida designs its floor routines

Junior Trinity Thomas completed her split leaps to perfection. She then tumbled diagonally across the floor but stayed in control.

She then sprung in the air, stuck the landing and grinned as the music softened.

The Gators fans in the O’Dome rose to their feet and erupted with cheers and adoration as Thomas recorded her second 10 of the season on floor at the Feb. 26 meet against No. 12 Auburn. It marked her third career perfect score on the exercise.

“That’s one of the best routines I’ve ever done in competition,” she said. “I honestly didn’t really care about the score.”

Every Florida gymnast sets a goal before she steps on the mats centered in the O’Connell Center. They want to leave it all on the floor, like actresses on the last night of a play’s run.

The Gators rank first in each of the sport’s four events, according to Road to Nationals. But no event energizes a sold out, socially distant home crowd like an electrifying floor routine.

Many gymnasts enjoy the floor routine because they can exhibit their creativity and personality. The vibrant display of expression and athleticism draws fans’ intrigue into the event.

Florida allows its gymnasts to choose the track for their performance. Miranda listens to music all the time and even keeps a master spreadsheet on his computer to help the athlete find the perfect tune. They can take it a step further and choreograph their whole routine, too. Junior Sydney Johnson-Scharpf did just that during the offseason.

The song selection demands the most time. Gymnasts begin to find the ideal melody after a season concludes. The hymn must motivate the gymnast to perform their best.

Once they finalize their song choices, Miranda and Florida cut the music to blend perfectly. Each gymnast has different preferences based on when they want to knock out their tumbling passes and leaps.

Judges give a baseline 9.4 score on every floor routine, Miranda said. The gymnast can generate .6 of bonus points to earn a 10 potentially. One of those moves must include a leap combination that’s rewarded with a tenth in bonus. The last five tenths come from each tumbling pass in the routine.

At the end of the summer, it’s time to choreograph. The process pushes the athletes to their mental limits because they hate mistakes.

Choreography takes trial and error because the gymnasts explore what works and what doesn’t.

Florida’s gymnasts always run to Miranda to add new moves to their exercise.

The coaching staff then focuses on making their routine appear effortless, Johnson-Scharpf said. Coaches focus on building the team’s endurance through practice exercises. Landings are the cherry on top of a routine.

The junior concentrates on her facial expressions when dancing on the mat to emphasize her performance.

Each of Florida’s routines tells a different story, she said. She hasn’t configured the story she hopes to tell, but she wants to symbolize a puppet coming to life.

Many Florida gymnasts named junior Nya Reed as their favorite on floor.

She collaborated with Miranda to design a routine with as much sass as possible.

The junior bounces, points her left index finger upward and makes it rain to Princess Nokia’s “Tomboy,” Megan Thee Stallion’s “Captain Hook'' and Nicki Minaj’s “Chun-Li.” Reed specifically chose all female artists because that was important to her, she added.

The key to her performance, Reed said, is to compete the same way she practices. She highlighted the need to focus on one skill at a time, such as keeping her toes pointed and her legs straight.

Despite how natural she appears on the floor, Reed despised the event at first. She said nerves filled her thoughts before she competed.

Coaches scolded her for how she kept her gaze on the mat and failed to make eye contact, Reed said. To work through these fears, coach Jenny Rowland instructed the team to line the outside of the floor during practices. She then told Reed she had to lock eyes with everyone on the team.

The arena bursted with applause and Reed witnessed how much fans love her routine and her sassiness. Her confidence soared, she left her fears behind and grew a passion for competing on floor.

“She’s just a ball of energy,” Johnson-Scharpf said. “She has so much sass, and I love her personality and she just really shines out there.”

Johnson-Scharpf adores Reed’s routines because she tumbles powerfully and gets massive height when she flips around the mat.

“She is a great performer,” she said. “I love [her floor routines] more and more every year. She’s just grown so much.”

When Johnson-Scharpf takes the floor, she walks to a corner of the mat and slumps over. As the tango music picks up, she springs to life. The junior choreographed her routine with her mother’s help during the quarantine. Johnson-Scharpf didn’t struggle to calculate her movements and synchronize them to the beat with her background in dance.

“I’m very in tune with my music,” Johnson-Scharpf said. “I just kind of let myself come up with what comes to my head.”

Reed bragged about how much she could watch Johnson-Scharpf’s floor performances on repeat for days.

“That girl is a performer,” Reed said. “I know every part of her routine. I love doing it with her.”

She couldn’t believe that Johnson-Scharpf crafted her own routine. But Reed often struts with Johnson-Scharpf during practice because she knows every second of her performance.

It’s also an every meet performance for Florida to dance with its teammate from the sideline.

The audience sings along to the late Tom Petty’s hits as she bounces across the floor. She sways her arms to “I Won’t Back Down” and then strings an air guitar to “Runnin’ Down A Dream'' before her final tumbling pass. She also diversifies her music with AC/DC’s “Highway to Hell” and “Back in Black.”

Richards knew Petty’s songs because she grew up listening to him. Her parents blared his music while she played in the nearby lake at their Illinois lakehouse.

“I just kind of wanted to do something like that and support my Gainesville community,” she said. “I grew up with four brothers, so we kind of listened to a lot of older music.”

Miranda said they keep her trademark moves, such as flexing her right leg over her shoulder, because they have become synonymous with 10s.

However, one patented move makes its way into every routine despite how different each performance looks — the Gator chomp. 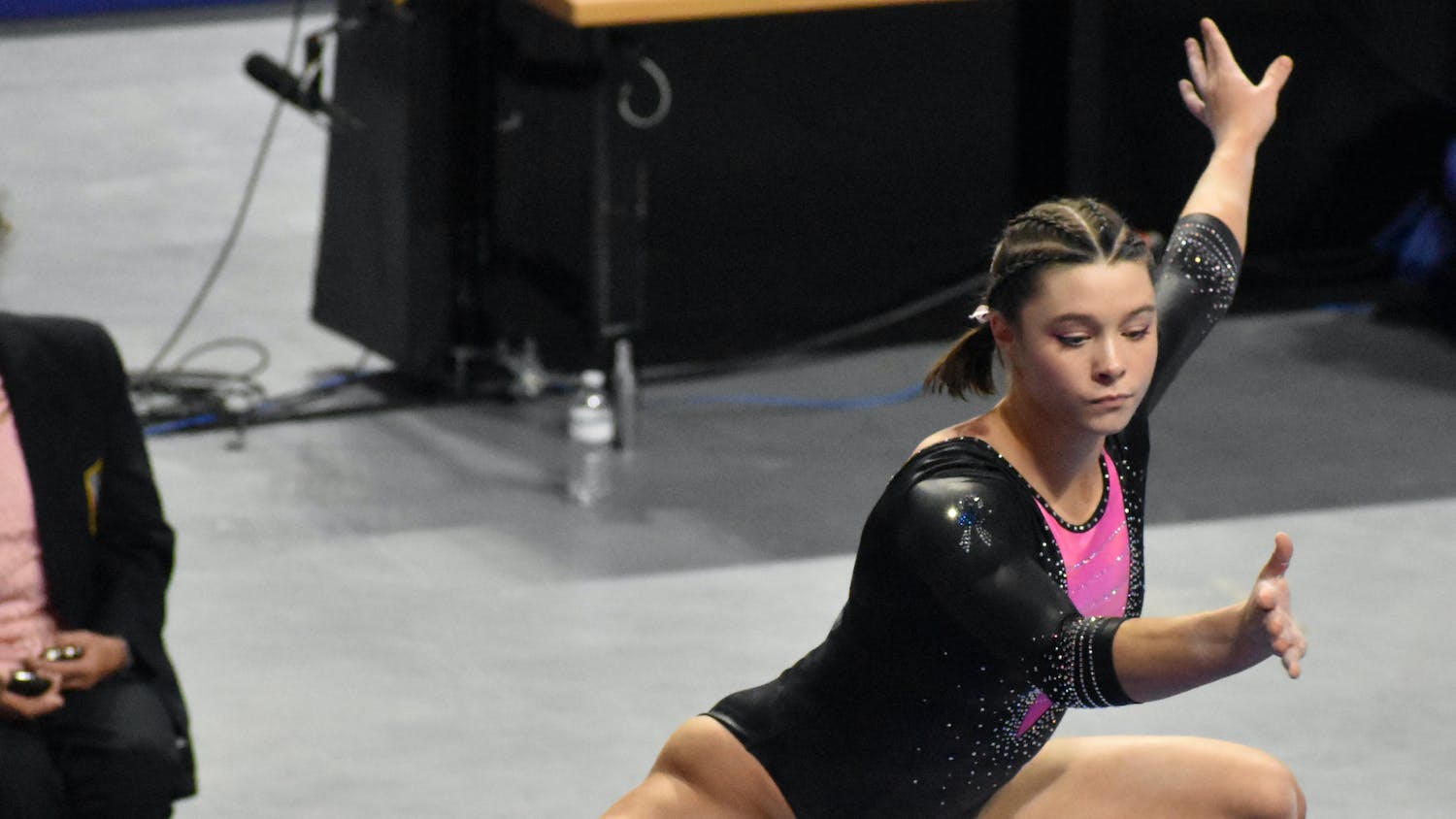 Florida owns all the tools to win it all 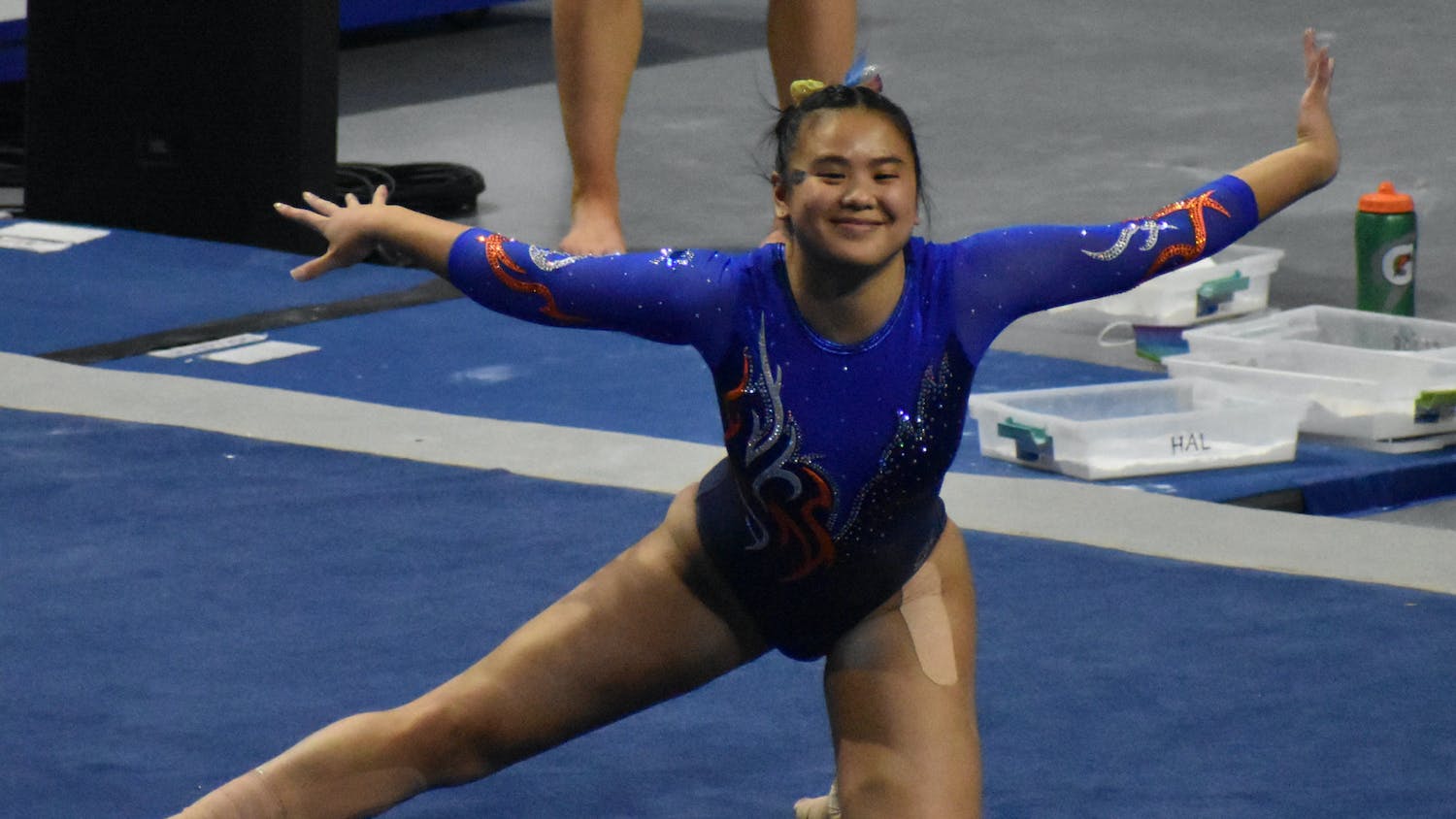