The Florida gymnastics team watched apprehensively as California quickly evaporated UF’s near three tenth’s lead. UF finished its exercise first and waited for the others to finish.

Seconds felt like minutes as time trickled away slowly in an hourglass for the Gators. The Golden Bears’ Emi Watterson nailed her dismount after a spectacular routine to potentially steal second place at the last moment.

Florida’s corral erupted with cheers and screams as teammates hugged and jumped with each other. Florida clung to second place in the NCAA semifinals Friday to advance to the championship Saturday in Fort Worth, Texas.

On a (nervousness) scale of 1-10, it was an 11,” coach Jenny Rowland said about the last rotation. “It was nerve-wracking.”

But Rowland said that’s how NCAA Championships end up and that she loves the nauseous feeling caused by the highs and lows of the competition.

Before the meet, UF received a significant boost to its rotation. Junior Trinity Thomas re-entered the lineup to compete in all four events for the first time since Feb. 26 against Auburn. And she thrived despite taking extra steps on landings to protect her ankle.

“She was probably having a little reservations about just that confidence and lack of training over the last couple weeks,” Rowland said about Thomas. “She’s done a fantastic job of staying in shape.”

Florida navigated treacherous waters in the first rotation as Florida’s gymnasts looked riddled with jitters. No Gator posted a score north of 9.9. Senior Megan Skaggs recorded a 9.8875, their highest-score in the first rotation. Thomas finished second for Florida with a 9.875.

They trailed second place California by over two tenths before they rotated to the balance beam, their strongest event. Florida ranks first on this event and floor, according to Road to Nationals.

But just like most of the season Florida overcame early adversity. Sophomore Payton Richards fell off the beam when she completed her triple aerial series.

Skaggs followed Richards and collectively took a deep breath with the rest of the Gators roster. They rattled off five-straight scores of 9.825 or better. Thomas soared and claimed the top score for UF with a 9.9125. The Gators roared back to take second place overall at 98.625, slightly better than the Golden Bears at 98.575.

Florida extended its cushion over California to almost three tenths. It only counted scores north of 9.9. Baumann, Thomas and junior Nya Reed led all Gators with 9.925s.

However, the Gators’ vault rotation was rough like a wooden roller coaster. Baumann started the apparatus and sprinted down the runway. She hurled herself over the powdered-covered and maroon-colored vaulting table. The “Ice Queen” fought for the landing, completed a deep knee bend to avoid a fall and scored a 9.75. Florida hoped to replace her score.

Junior Savannah Schoenherr, three vaults later, tossed her 5-foot-3-inch body over the vault and completed a near-squat to stay up with her backside hanging a mere few inches above the blue mat. The Gators recorded a 49.225, tied for its second-lowest vault score this season, and narrowly hung on to advance.

Reed said she’s confident Florida will knock off the rust it showed during the semifinals before Saturday.

“We can move several mountains,” she said. “I think today was just a warmup and tomorrow we’re going to be amazing and better than ever.”

UF advanced with Michigan, Oklahoma and Utah to the championship meet at 3:30 p.m. and can be seen on ABC. 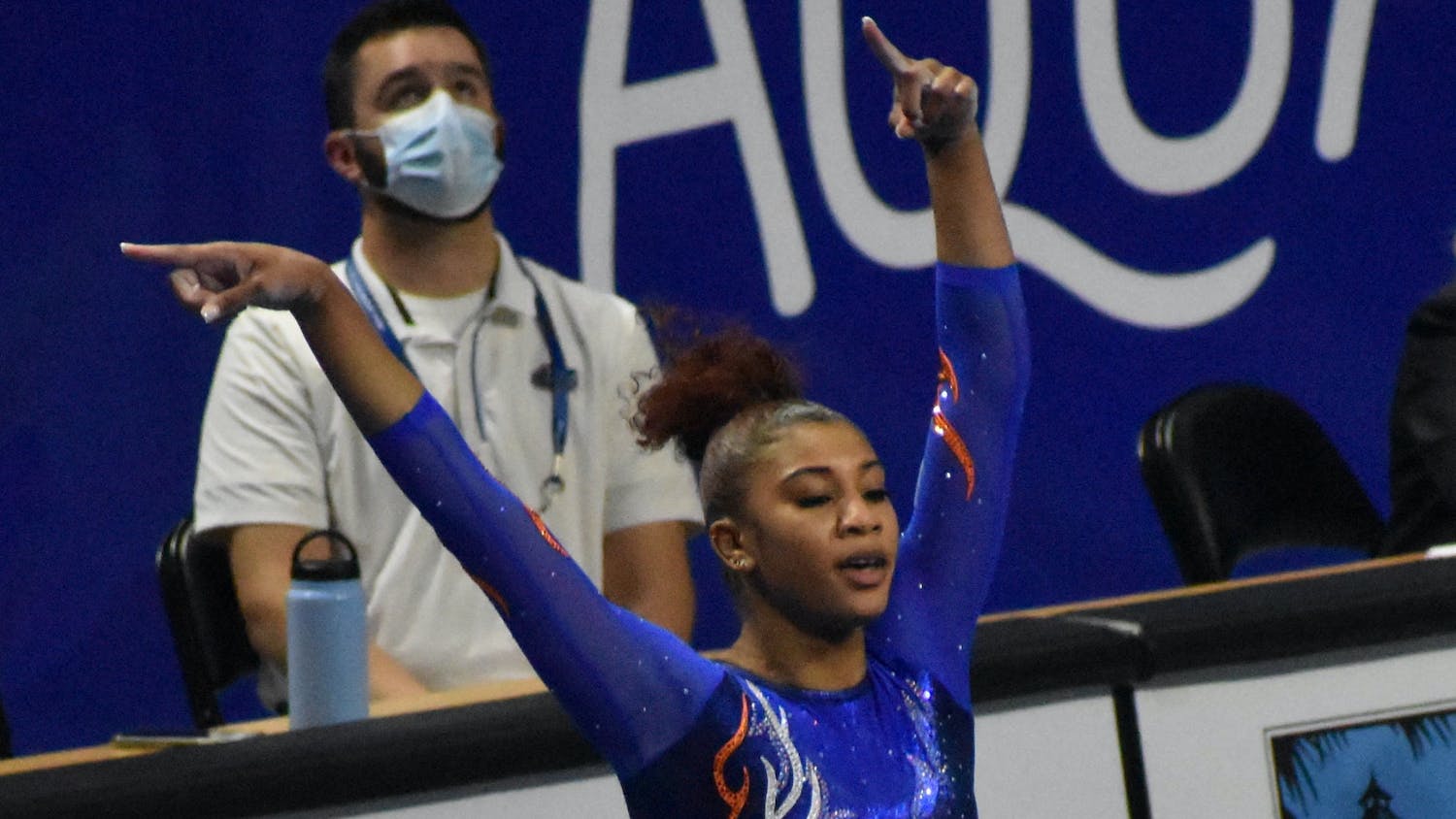