Skip to Content, Navigation, or Footer.
Donate Now
We inform. You decide.
Thursday, January 27, 2022
Developing:
The latest news on UF’s barring of professors from testifying against the state
NEWS  |  CAMPUS

Srila Prabhupada, the founder of ISKCON, inspired it through his 1971 UF address

Since 1971, the Hare Krishnas have offered a haven of love in the form of affordable plant-based meals at the Plaza of the Americas.

Thursday marked the 50th anniversary of the arrival of A.C. Bhaktivedanta Swami Prabhupada, the founder of the International Society for Krishna Consciousness and also known as Srila Prabhupada, at UF. His 1971 address, which took place in the Plaza of the Americas, inspired the Krishna Lunch known by UF students and the Gainesville community today.

In celebration of the anniversary, an event-filled festival began Thursday and will continue until Saturday.

The events include speakers, an open house at the Bhaktivedanta Institute and a groundbreaking ceremony at the Krishna House, where they are expanding both the kitchen and its housing facilities.

Nanda Dasi, 49, the Krishna Lunch manager, oversees the entire production, coming up with the menu, changing recipes as needed and making sure they never run out of food. She has been a follower of Krishna Consciousness for 30 years.

“It’s definitely improved my character,” Dasi said. “I see the world very differently than I did when I first started practicing.”

Dasi said 50 years is a long time to continually serve healthy meals to the students and people of Gainesville.

“It started so small, and it grew to what it is today,” she said. “It persisted through time and even through a pandemic.”

Even during the height of the pandemic, the Hare Krishnas found a way to be there for the community. They set up an online platform so people could order Krishna Lunch to-go and decided to distribute lunches to the hospital for health care workers, Sruti Sagara Das, 31, the president of the Krishna House, said. For other people in need, they went door-to-door to ask if they wanted to sign up for Krishna Lunch, and many of them did, he said.

Now, they provide meals to the Ronald McDonald House.

“We just try to help out in general in the community, not just with the food but also the idea that we’re there for you,” he said.

After not being on UF’s campus from April to August of 2020, they worked closely with the university to create safe COVID-19 protocols when they returned. While Summer is slow, they feed about 300 to 500 people each day during Fall and Spring, Das said.

“We’re just not out there to sell our $5 lunch,” he said. “We want to support students. We want to be there for them throughout the whole year.”

Especially over the last year, the most rewarding part for Das is being there for other people through the ups and downs.

He said the tradition of Krishna Consciousness comes from India, and its main text is the Bhagavad Gita.

Krishna Consciousness’ main values are that there is one God, and everyone is a soul in a human body. There are many different ways to serve and tap into the nature of the soul, which is different from that of the material body, he said.

“Our main essence is to function in harmony with God and to serve God as spirit souls,” he said.

Krishna Lunch food is sanctified and offered with love to Krishna. The vegetarian and vegan meals offered fulfill one of their main tenets by providing food without violence.

For unlimited helpings, there is a suggested donation of $5, which Das says mostly goes toward the food itself.

At Krishna Lunch, compostable plates are used in collaboration with UF, Das said. They work to have the least amount of trash and to avoid polluting the Earth — a living entity — further.

Tasnim Thakur, a 21-year-old UF business senior, said her favorite thing about Krishna Lunch is the sense of community that comes along with it. Each weekday at lunchtime, everyone is out on the Plaza lawn eating Krishna, she said.

“It’s a tradition,” Thakur said. “If you go to UF and you haven’t had Krishna Lunch on that lawn at least once, it’s one of those bucket list things.”

The food is good and really affordable, she said, which is important for college kids. By far, her favorite lunch item is Krishna’s Friday potatoes. One of her favorite things, she said, is how she always runs into people she knows at Krishna or wouldn’t have seen otherwise.

“I think they play a big part in fostering community,” she said. “They’re just such a well-known name on campus, like everybody knows what Krishna Lunch is.”

Reagan de la Cruz, a 19-year-old UF marketing sophomore, said she likes Krishna Lunch because it’s a cheap, healthy option on campus. All of the people from Krishna are friendly, and it’s a fun place to have lunch, she said.

She would sit at the tables in the Plaza of the Americas or across from Turlington to enjoy her meal. She estimates she ate Krishna Lunch around 30 to 40 times this year.

Nartaka Gopala, a property trustee for the International Society for Krishna Consciousness, said the Krishnas are sometimes called “kitchen religion.”

“We try to put the love and devotion into our cooking, and we also say prayers over our food so that when whoever eats the food gets a certain type of blessing,” she said.

Through the years, Gopala has interacted with past UF students who say the Krishnas saved their lives while in school by feeding them every day.

“They express their appreciation for the availability of food prepared with love right in the middle of campus when they need it the most,” she said. 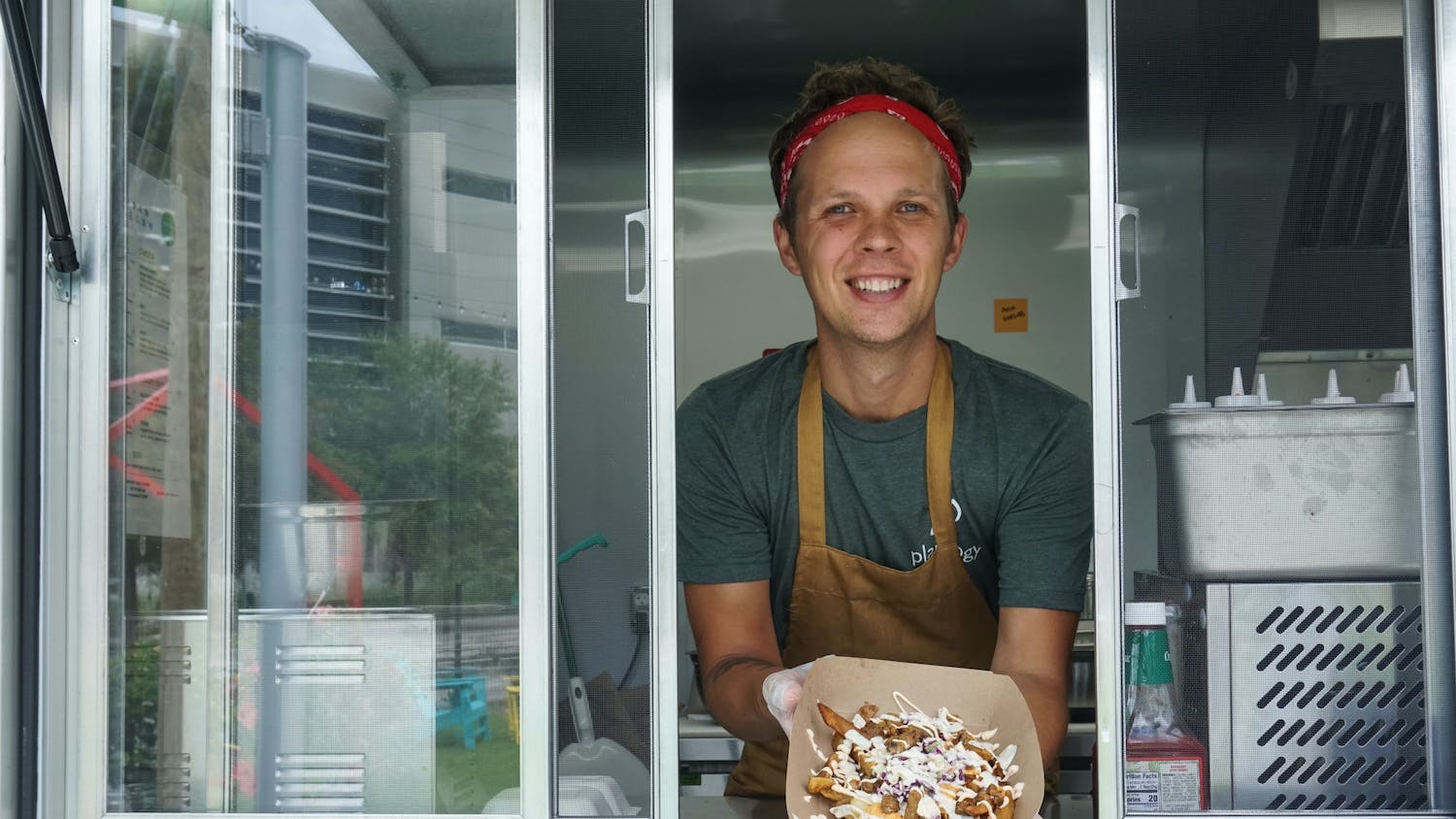