The Alligator compiled a live timeline of updates regarding the events

This is a developing story. Check back for current updates.

Walker granted the motion in part, prohibiting the university from enforcing its policy because he determined the policy chilled the faculty’s speech.

January 3: In an attempt to end the lawsuit during its early stages, UF’s Board of Trustees requested the case be dismissed, but the presiding judge, Mark Walker, denied the motion.

UF argued the case should be dismissed because it reversed the decision and changed its policies to allow faculty to provide expert testimony in cases against the state, according to the order denying the motion to dismiss.

The university also stated the professors did not complete the grievance process outlined in the collective bargaining agreement and have waived their First Amendment claims because they failed to follow procedure.

Walker decided the collective bargaining agreement does not waive their First Amendment rights, therefore denying the Board of Trustees motion to dismiss the case.

December 10: David Norton, vice president of faculty research, sent out an email to the faculty and staff addressing the claims of the reported destruction of COVID-19 research data. The email stated under the support of President Kent Fuchs, UF Research and the UF Office of Compliance and Ethics have initiated a formal investigation. The results will be public once completed.

December 9: David Bloom, UF Faculty Senate Chair, sent an email to the faculty with updates from the discussions about the UF Faculty Senate ad hoc committee’s report. The committee recognized that there were five main areas that incidents reportedly fell into.

The five main areas include serving as an expert witness, outside activities that were deemed to be a conflict of interest, freedom to interact with the press, requests to delay publication of research or to destroy research samples, and asking faculty to avoid using certain words or phrases in course syllabi or web sites that were deemed provocative or politically sensitive.

The UF Faculty Senate discussed actions that they recommend UF administration take. Bloom wrote that he discussed these recommendations with President Fuchs, and Fuchs has agreed to all five.

December 6: The faculty senate ad hoc committee tasked with investigating UF’s policies on behalf of the faculty senate found restrictions on outside activities that allegedly challenge political priorities of the state’s executive branch. It also found pressure to alter course content to avoid viewpoints that opposed the state’s elected leaders.

The report released by the committee found that COVID-19 data was destroyed or delayed from being published and employees were verbally told to not criticize Gov. Ron DeSantis or UF’s COVID-19 policies publicly.

December 3: Board chairman Morteza “Mori” Hosseini defended himself and other administrators by blaming faculty for the policy that led to the barring of professor testimonies that started the scandal, expressing disappointment in faculty union leadership and calling media reports incomplete.

Board member Rahul Patel dismissed faculty who vocally oppose the administration as a loud minority of total faculty.

Board member Anita Zucker pointed to president Kent Fuchs’ decision to allow white supremacist Richard Spencer to speak on campus in 2017 as an example of UF supporting freedom of speech.

The professors suing UF for its barring of expert witness testimony filed a court motion to end the university’s conflicts-of-interest policy.

November 23: President Fuchs released his task force’s report on its recommendations in a university-wide email. He also accepted the recommendations.

The task force advised the university to preserve its right to deny requests that pose as a conflict of commitment. But emphasized professors have a right to comment and serve as experts in cases against the state, especially in cases that challenge the constitutionality, legality or application of a Florida law.

The professors suing UF over the scandal said they were disappointed by the recommendations in a joint statement.

UF also sent documents to its accreditor in order to comply with its investigation into the scandal. In a press release, UF stated it sent the documents over and affirmed that no outside influence affected its decision to bar professors from testifying against the state.

November 22: President Fuchs’ Task Force on Outside Activities met for its final meeting. The members said they sent Fuchs their final recommendations one week ahead of schedule. They did not make the recommendations immediately available to the public.

November 18: Congress members Debbie Wasserman Schultz and Jamie Raskin sent a letter to President Fuchs to reiterate their concerns about the infringement of academic freedom at UF. The Subcommittee on Civil Rights and Civil Liberties will be investigating UF to see to what extent the university “undermined the integrity of academic freedom and interfered with employee’s constitutional right to speak freely.”

They have requested UF send them specified information about their conflicts-of-interest policy and the university’s denials of faculty’s requests by Dec. 2.

November 17: The UF Faculty Senate held an emergency meeting to devote more attention to academic freedom. The Faculty Senate Welfare Council drafted a resolution that suggests the senate call upon the UF administration to invite an external, independent evaluation of UF’s policies. The resolution aims to ensure separation of the school from outside groups, particularly state and federal governments.

The Faculty Senate discussed a previously appointed ad hoc committee, acting as a fact-finding body to report back to the Senate about UF’s practices affecting faculty’s ability to engage in outside activities. The committee is not subject to The Sunshine Law, so all information submitted is confidential to ensure that faculty members feel comfortable submitting reports without fear of repercussions.

November 16: The dean of the College of Liberal Arts said the decision to deny requests from the three UF political science professors to testify against the state came from UF’s administration, according to a Chronicle of Higher Education report. At a CLAS Assembly held today, he said the decision was reviewed by central administration, who deemed the testimony to go against the school’s interest.

November 12: The three professors who were originally barred from testifying sent a letter to President Fuchs expressing disappointment in his Task Force on Outside Activities. The letter states that two members of the task force, Laura Rosenbury and Terra DuBois, have been involved in the policies that barred the professors in the first place. Therefore they are not suitable to be on the task force, according to the letter.

November 9: President Fuchs’ Task Force on Outside Activities met for the first time. They agreed to create a plan to review UF’s policies on disclosure of outside activities and conflict of interest within 20 days.

UF officially reversed its decision to not allow professor Michael McDonald from testifying against the state.

The three professors who were originally denied testimony against the state have filed a lawsuit against UF.

November 4: Fuchs addressed the controversy for the first time since news broke out in a senate faculty meeting. He alluded to a future announcement that he said would not be appropriate to make at this time.

Chief judge Mark Walker of the United States District Court for the Northern District of Florida addressed the issue. He stated that although the issue is not in front of a court at the moment, it is possible the issue could go before a court if the United States Attorney’s Office decides to pursue an investigation and initiate criminal proceedings.

November 2: A Times/Herald Tallahassee Bureau report finds that five additional professors were limited in their abilities to act as expert witnesses in cases against the state.

Paul Ortiz, UF faculty union president, said UF has been ignoring pleas from professors and the union to reverse its decision to restrict professors from testifying against the state from as far back as Oct. 13.

President Fuchs received a letter from 10 U.S. Congress members who expressed their “profound disappointment with the decision to prevent” the three professors from serving as expert witnesses.

November 1: UF’s accreditor opened an investigation into the school following the New York Times report, according to the Chronicle of Higher Education.

UF released a statement announcing a task force revising the school’s conflict of interest policy. The statement also stated the professors can testify if they do not receive compensation.

October 29: The New York Times released a report outlining how UF blocked three political science professors from testifying in a case against one of the state’s voting laws. The professors were barred from testifying because their participation as expert witnesses is adverse to the university’s interests, according to the school’s response to requests to testify from the professors. 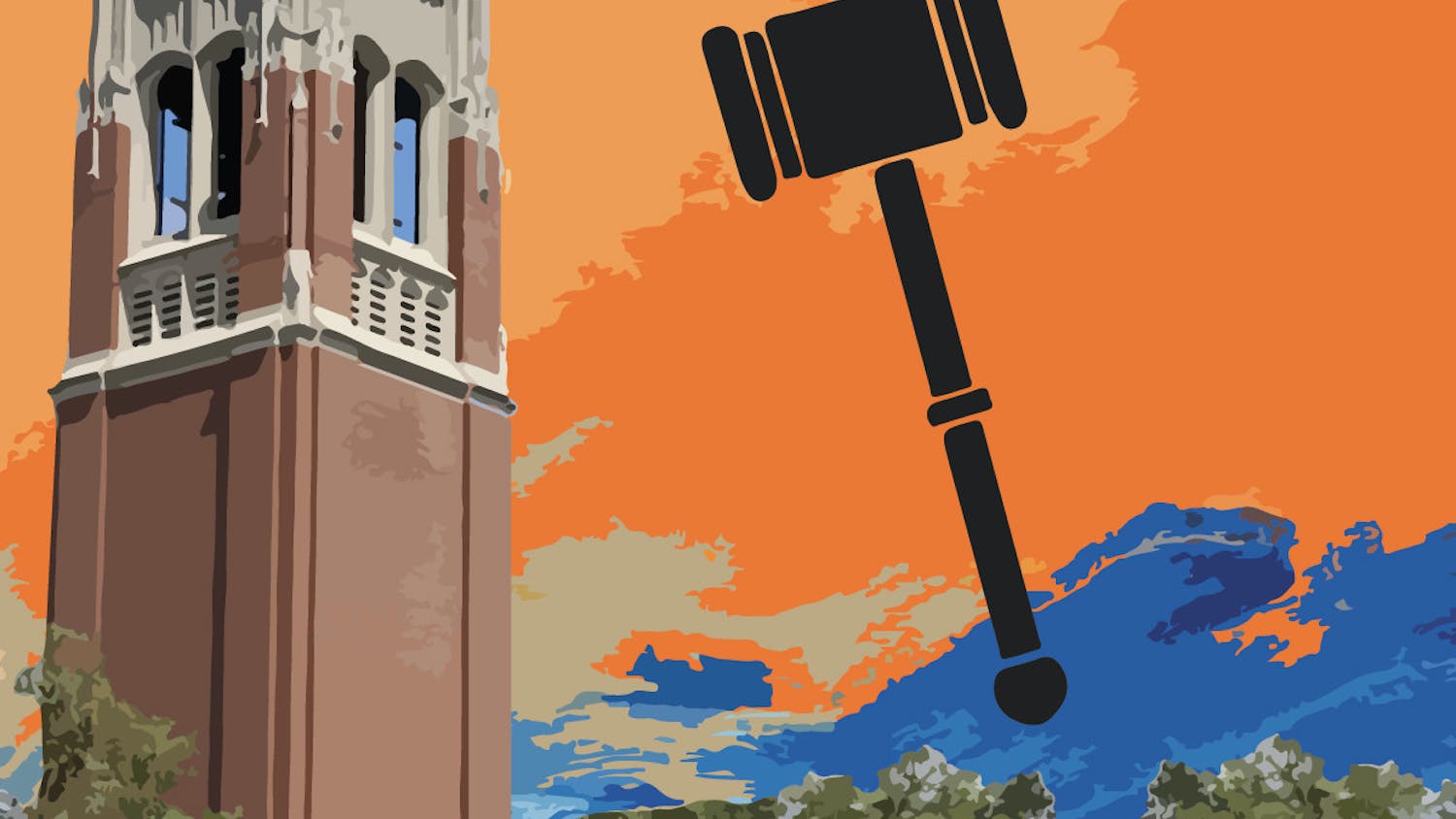