The cost of students enjoying a once-in-a-lifetime opportunity to celebrate with their university’s basketball team?

The small wave of Gators fans sprinted, skipped and jumped on the hardwood to celebrate one of the biggest upsets in school history.

Although the Florida faithful hesitated to storm the court, those fans who did take advantage were in a state of euphoria.

Why wouldn’t they be?

Storming the court and rushing the field is always a beautiful sight when passing by ESPN. The underdog that no one had faith in, except for its fans, pulled off the improbable and took down an unstoppable force.

Then, a sea of college colors flood the playing grounds. Athletes and coaches embrace the students, celebrating an unthinkable win to take down an athletic powerhouse.

Why can’t Florida be a school of that culture?

Florida is supposed to be an elite program! They’re not. This is the same team that lost to an at-the-time winless Texas Southern back in December and have barely hung on to win over teams like SEC bottomfeeders Georgia.

The last time Florida punched a ticket to the Elite Eight was five years ago, on a miracle 3-point heave from guard Chris Chiozza, and 2022 doesn’t look like it’s going to end with head coach Mike White cutting any nets.

That being said, if the Gators aren’t elite this season, why not celebrate the highest-ranked win in the Stephen C. O’Connell Center?

The students who are on campus for four years don’t get many opportunities to share a court with athletes who are celebrated by the University every day.

The mighty No. 1 Gonzaga Bulldogs fell to No. 23 St Mary’s Saturday, just a week before conference championship play begins. Despite being a top-25 team and an expected participant in the March Madness tournament, the St. Mary faithful stormed the court in full force.

Six of the current top-10 teams fell Saturday afternoon and St Mary’s was the only underdog program to storm the court. One could call St Mary’s a mediocre program at best, carrying a 5-10 record during March Madness.

Regardless of their program’s prestige, they seem to have a hell of a lot more fun celebrating a win while taking down a basketball goliath.

Are we really going to look down on college students enjoying what’s supposed to be the best years of their lives?

The elitist attitude has plagued Gainesville.

From a top-5 university ranking to copious amounts of national championships spread across the football, baseball, softball, basketball and tennis programs; Florida fans now expect a little too much from their respected sports teams.

I say it's time to let loose.

Florida isn’t returning to the elite status it once carried more than a decade ago. “Old heads” will be up in arms about carrying respect for the program, but even the players wanted to celebrate with their fans.

Without them, the win would’ve been impossible. White recognized this in the post-game media session.

“Without [the fans] we may have been a point short, or five or ten,” White said. “They were a factor. We forced 17 turnovers, that’s not happening without them. They were incredible and I’m happy they got a chance to have that moment postgame.”

Beating any top-5 team is huge. It changes the landscape of the postseason and heavily affects how bracketologists create their seedings. Florida downing No. 2 Auburn shattered the March landscape and set up the Tigers’ subsequent loss to No. 17 Tennessee.

The domino effect is in full motion and Florida fans can say they sparked it last weekend.

Although the Gators can still be a team you storm the court against, they have fallen to the level where it’s still worth celebrating a monumental victory with fans on the court.

The world may never see Steve Spurrier-Florida Field get rushed, but that’s a shame and seems like a spectacle I’d love to be a part of.

Florida fans with an elitist attitude don’t have to participate. They can sit, cross-armed on the bleachers and frown while peers take in a once-in-a-lifetime experience.

If I’m not in the press box, I’ll be on the turf – where the passion is.

If you cut me open, I’d most likely bleed orange and blue. My rose-colored glasses have been on for a while regarding Florida athletics. Of course, the standard for any team should always be a national championship, but the Gators are nowhere close this season and will most likely earn a bid in the lesser-NIT tournament.

Enjoy the down season to the fullest potential. Even by storming the floor after toppling the No. 2 team in the nation. 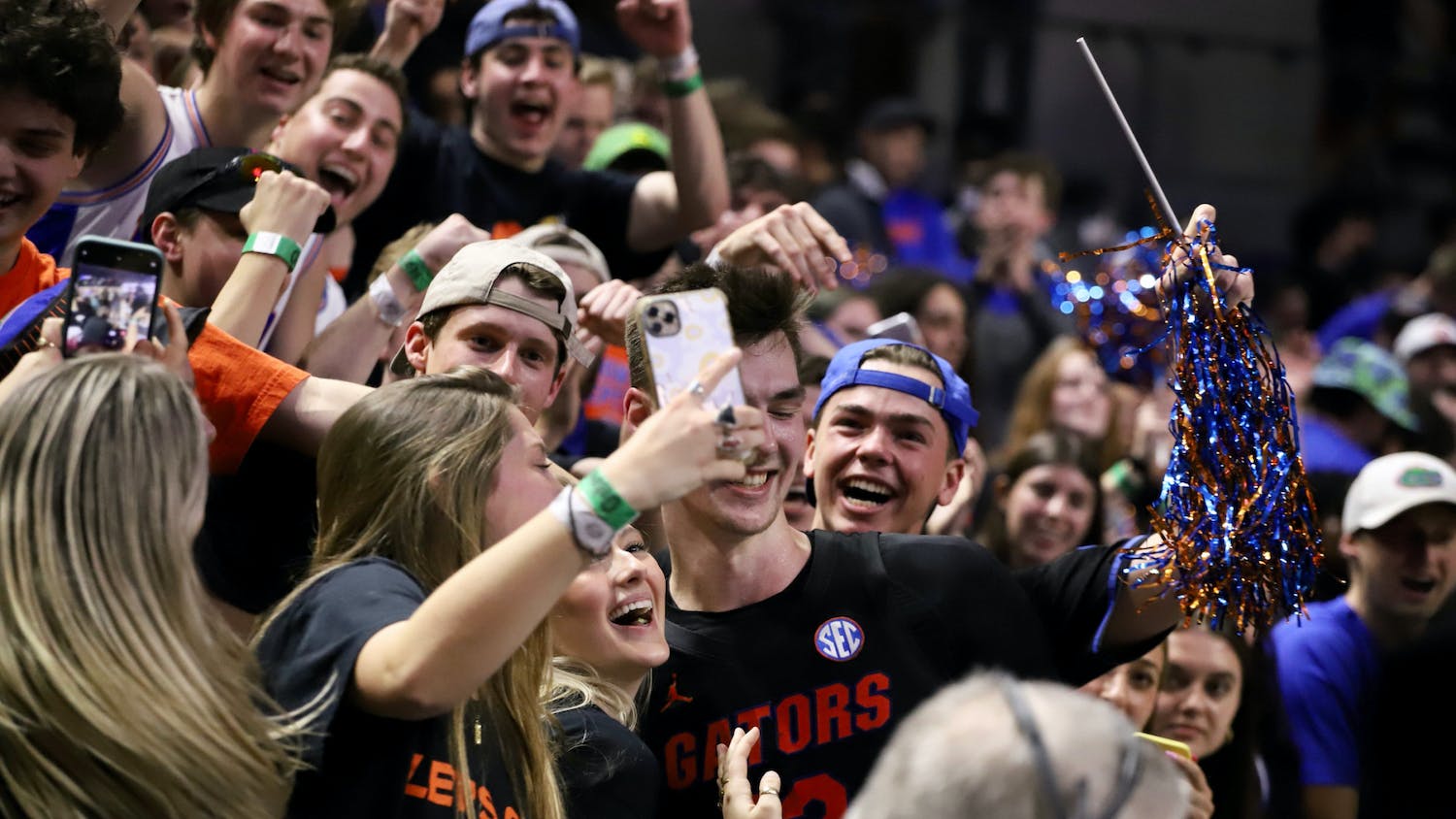 Opinion: Florida fans storming the court sent a message about the state of the program