After a year of momentous musical moments, the Grammys has returned to deliver its prestigious accolades to the artists who deserve to take home the gold — or not.

The Avenue staff teamed up to give our breakdown of six Grammys categories — Record of the Year, Album of the Year, Song of the Year, Best New Artist, Best Pop Solo Performance and Best Rap Album — giving both our Grammys predicted winner and who we think deserves to win. Musical talent, lyricism, popularity and even drama are all on display in our analyses.

This year’s Grammys are already proving to be no stranger to controversy: a Kanye performance ban, an unexpected Tweet of resignation from Doja Cat and a months-long COVID-related postponement of the ceremony to the now-confirmed April 3 date. Music’s biggest night is shaping up to be an interesting one, and the Avenue staff is ready for it all.

Amanda’s Pick: “Happier than Ever” by Billie Eilish

The Record of The Year category awards artists, producers and engineers for the year’s best recording — with previous winners including “Hotel California” by The Eagles and Adele’s “Rolling in the Deep.”

Front-runners for this year include “Leave The Door Open” by Silk Sonic, "Kiss Me More” by Doja Cat featuring SZA, “drivers license” by Olivia Rodrigo and “Happier Than Ever” by Billie Eilish.

Although Eilish has taken home the award for the past two years, the 20-year-old’s pop-punk track of emotional turmoil “Happier Than Ever” should win the 2022 Grammys' Record of The Year.

What makes “Happier Than Ever” stand out among the other nominations is the tonal shift from a soft, soulful ballad to a full-on rock anthem midway through the record. The song begins with the luscious strumming of a classical guitar accompanied by Eilish’s jazzy vocals. Two and a half minutes into the song, the classical guitar is abandoned and replaced with an electric guitar, signifying a shift from sadness and confusion to pure anger.

Eilish’s previous velvety vocals are now shaky and aggressive as if she is about to release a tidal wave of built-up emotion. By the three-minute mark, the song is overtaken by combative vocals and fierce rock elements. With lines like “Cuz, I’d never treat you this sh***y/You made me hate this city,” being a stand-out and internet-viral lyric from the track, Eilish delivers a heart-wrenching anthem that anyone going through a bad breakup would want to scream along to.

Many critics say this track is Eilish’s best work and marks her strongest vocal performance. Although I prefer Eilish’s more minimalistic, full-on piano and guitar ballads, I think this is by far Eilish at her most experimental. Overall, the innovative juxtaposition of a soothing ballad beside classic rock elements makes this record outshine the other nominations.

However, one cannot deny the global success of Olivia Rodrigo’s “drivers license.” The song has over one billion streams on Spotify and has broken countless records. Rodrigo also expresses exceptional vocal and songwriting talent on the heartbreak ballad. Therefore, she is most likely to take home this year’s Grammy for Record of The Year.

Predicted Grammys Pick: “Happier Than Ever” by Billie Eilish

Coming off of a stunning Big Four sweep in 2020 and a Record of the Year victory in 2021, Eilish has cemented herself as a force to be reckoned with. Although I don’t predict another sweep from the 20-year-old dark pop sensation, I do see “Happier Than Ever,” coming out victorious for Album of the Year due to Eilish’s commitment to angelic vocals and her tight-knit group of collaborators.

But, as someone who watched Eilish perform her innovative discography from “WHEN WE ALL FALL ASLEEP, WHERE DO WE GO?” at the short-lived Where Do We Go? World Tour, I didn’t see Eilish deliver the same level of genre-bending music in “Happier Than Ever.” Most songs fell short of wowing me. With the jaw-dropping title track “Happier Than Ever,” Eilish set a high bar that most of her tracks failed to clear.

To me, it’s obvious who should be bringing home the golden gramophone: Doja Cat for “Planet Her (Deluxe).” An album of intergalactic proportions, Doja Cat unquestionably owned 2021 with the countless hits she produced on “Planet Her (Deluxe)”: “Woman,” “Need to Know,” “Kiss Me More” and “Get into It (Yuh),” to name a few. Nearly every song on the album became the soundtrack to a viral TikTok trend, making the app’s influence on the music industry an interesting phenomena to look out for this year.

However, being at the top of the charts is not a determining factor in Album of the Year, which seemed to be at play back in 2015 when Beck’s “Morning Phase” snubbed Beyonce’s self-titled album out of a seemingly clear win. At the same time, I don’t fully buy that Album of the Year is completely blind to album sales and chart-topping singles — explain Taylor Swift’s “1989” beating out Kendrick Lamar’s “To Pimp a Butterfly” if that was the case.

Outside the scope of virality, “Planet Her (Deluxe)” demonstrates a mastery of lyricism, musical production and a commendable list of collaborations: SZA, The Weeknd, Ariana Grande and JID. Doja Cat’s flawless flow guided her listeners effortlessly to the alien world of Planet Her, and I thoroughly enjoyed the ride.

Predicted Grammys Pick: “Call Me If You Get Lost” by Tyler, The Creator

Dazion’s Pick: “Call Me If You Get Lost” by Tyler, The Creator

Of all that can be said about the bias of the Grammys voting process, there’s no way the Recording Academy would miss the impact Tyler, the Creator’s “Call Me If You Get Lost” had on the state of hip-hop in 2021.

Admittedly, the competition is tough for Tyler, the Creator as he is up against a world-class list of nominated hip-hop albums that bridges two generations of rap with excellent execution.

On Nas’ “King’s Disease II”, the world was blessed by a rare verse by music legend Lauryn Hill, in addition to songs like “YKTV” featuring A Boogie wit da Hoodie and YG that molded the album to fit perfectly in current New York hip-hop culture.

J. Cole’s return to form with “The Off Season” solidified J. Cole’s legendary status in our current generation with songs like “m y . l i f e” featuring 21 Savage and Morray.

However, what gives “Call Me If You Get Lost” the winning edge over its competition is the sheer impact Tyler, the Creator continues to have through warping what hip-hop can sound like.

Tyler recruited the music industry’s finest for the album: from the eccentric, high energy performance of music icon Pharell Williams on “Juggernaut” to the smooth yet undeniably confident delivery of YoungBoy Never Broke Again on “Wusyaname.” It would be a crime not to mention DJ Drama’s “Gangsta Grillz” ad libs, throwing it back to the late 2000s mixtape movement.

The cross-section of hip-hop, R&B, soul and bossa nova, of all things, shatters all expectations for the category. DJ Drama serves as the hip hop engine that drives the album, despite the genre mixing that Tyler loves to do so much.

Lyricism and melodies aside, the style and grace displayed by Tyler’s “Sir Baudelaire” persona has continued to inspire new waves of fashion trends — replete with pastel-colored sweater vests and coffee-colored pleated pants — giving young people yet another reason to be themselves unapologetically.

This year brings heavy hitters to the table like “Happier Than Ever” by Billie Eilish and “drivers license” by Olivia Rodrigo, I am confident that the voting committee will award Bruno Mars, Anderson .Paak and the team of songwriters behind Silk Sonic’s “Leave the Door Open” with the dub. The lead single of Mars’ and .Paak’s debut album, “An Evening with Silk Sonic”, perfectly encapsulates the sensual undertones within R&B rhythms that Song of the Year awards have typically been handed to.

But in my eyes, it is Ed Sheeran, Johnny McDaid and Fred Gibson’s “Bad Habits” — of the album, “Equals” — that embodies both the engaging melody and meaningful thematics in a truly deserving Song of the Year winner. The song’s upbeat tempo blended through consistent and smooth transitions between lines captivates listeners into the quite culturally relevant material of the piece. The song’s underlying focus on addiction pervades every word of the single’s lyrics as Sheeran draws upon his own experiences with drug and alcohol abuse.

What particularly strikes me about “Bad Habits” is the ambiguity by which the narrative is told.

“Every time you come around, you know I can’t say no. Every time the sun goes down, I let you take control.”

The emphasis on you in just the opening verse of the song may seem reminiscent of a love interest, but instead, Sheeran speaks to the drugs he takes and gives them animacy. You’re taken into a journey through metaphor, symbolism and imagery that tests you to determine what the songwriters are really trying to tell you. It is this “figure it out” element coupled with a fun rhythmic beat that stands “Bad Habits” out among the rest of its competitors.

The obvious pick for this year's Best New Artist award is 19-year-old singer-songwriter Olivia Rodrigo. Since her debut single "Drivers License" was released to critical acclaim in January 2021, Rodrigo has experienced a whirlwind of success. Her following singles, "Deja Vu" and "Good 4 U", both reached the Top 10 of the Billboard Hot 100. Rodrigo's debut studio album, Sour, held the number one spot on the Billboard 200 for five weeks. By the end of 2021, Rodrigo was one of the best-selling artists of the year.

With her emotionally vulnerable and relatable lyrics, Rodrigo was one of my most played artists in 2021. Her powerful voice often blasted in my car, where I would rock along with the energy of "Good 4 U," bringing a sound that reminded me of my angsty high school self.

At the same time, her album delivered the sorrowful ballad of "drivers license", feeling like an embrace from a friend in the aftermath of my first breakup. Rodrigo's songwriting, which has resonated with me and 42 million other Spotify listeners, is what makes her stand out as the deserving Best New Artist for this year's Grammys.

Alexis’ pick: “Anyone” by Justin Bieber

“Anyone” by Justin Bieber is a powerful ballad, different from any of Bieber’s usual pop music. I credit this shift to his relationship to his wife, Hailey Bieber. The pair had their ceremony in Sept. 2019 and she has been the inspiration for his most recent album, “Justice.”

Specifically, with the song “Anyone,” Bieber sings about how he could never love someone as much as Hailey with the lyrics: “If it’s not you, it’s not anyone.” The smooth vocals showcase what a beautiful voice Justin actually has. Also, the music video portrays him as an old-timey era boxer — symbolizing Bieber working at his career to support his wife.

What I think is assumed to win is Olivia Rodrigo’s “drivers license.” Unless you’ve been living under a rock, this song has been dominating the radio, charts and social media platforms for the past year. The lore behind the song is very intriguing but I believe it should win for a different category, perhaps for Song of the Year. However, for Best Solo Pop Performance, it’s Justin’s time to shine, because the risk he took to be so vulnerable on “Anyone” deserves recognition. 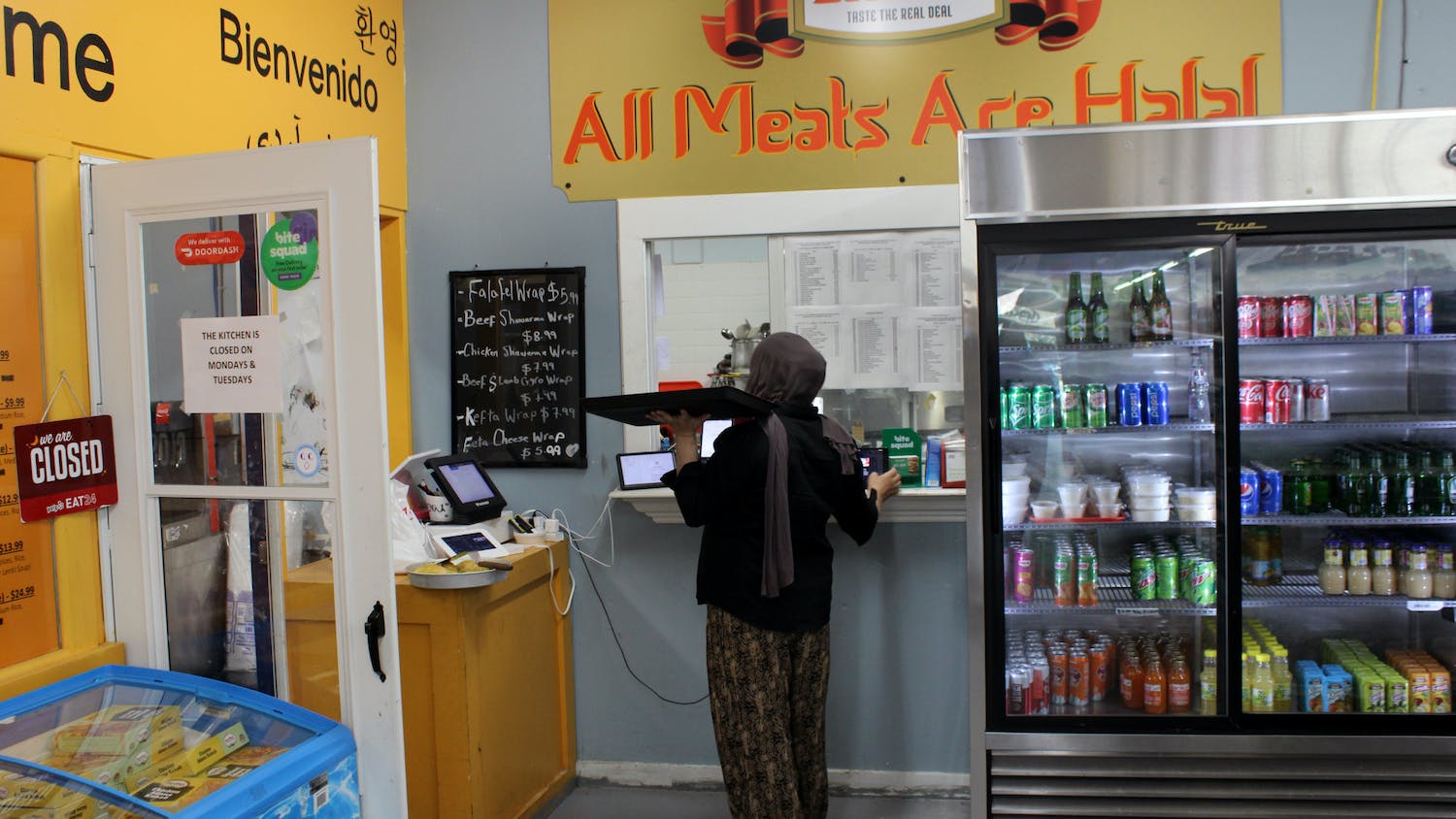