One spot in the rankings separates Florida’s Sam Riffice and Tennessee’s Emile Hudd.

Their battle Sunday was as evenly matched as predicted. Breaks were hard to come by, with both players consistently defending their serve.

After managing to squeak out a 7-5 victory in the first set, Riffice had a chance at a break after forcing a deciding point during Hudd’s serve while he led 3-2.

After the two rallied for a bit, a perfectly placed shot forced Riffice on a long run. The senior gave a final diving effort near the net. The ball barely flipped over to the opponent's side, having just enough finesse to place Hudd in a vulnerable position, unable to return the shot.

Riffice danced and waved his arms in celebration, going on to win the next two-consecutive games in what proved to be a pivotal moment in the Gators’ victory.

Florida continued its dominance in doubles, but it wasn’t easy to overcome a stout Tennessee lineup.

Freshman Nate Bonetto was brilliant alongside senior Duarte Vale. A perfect serve on match point from Bonetto lifted the pair over the No. 45 Volunteer tandem of Conor Gannon and Mark Wallner.

Senior Sam Riffice and sophomore Ben Shelton were locked in a duel with No. 16 Emile Hudd and Shunsuke Mitsui, as the two traded serves before the Gator couple found a 5-4 lead. With Bonetto and Vale cheering on, Florida had two opportunities at a match point, needing only one.

A huge forehand from Riffice found the surface twice, and Florida clinched the doubles point.

In singles, the first to finish was Bonetto. The freshman phenom quickly went up 3-0 in the first set but struggled from there as he lost in two sets to Tennessee senior Pat Harper. It was the first singles loss for the two-time SEC Freshman of the Week.

With the overall match tied at one apiece, No. 56 Riffice used his big momentum swing to defeat No. 55 Hudd in two sets. Riffice has now won four consecutive matches after being moved to the second spot in the lineup.

The man who took that spot, of course, is No. 1 Shelton.

Shelton came into the match with four consecutive victories of his own and looked like he would get an easy one after a 6-3 victory in the first set. He then completely lost his game, dropping the first five points in the second set before salvaging one last and eventually losing.

In the third set, Shelton snapped back into form. He flipped the tables and won the first five-consecutive points before Walton tacked on one late. Shelton then sealed the deal while serving his third match point.

With a 3-1 lead in the match, the Gators needed just one point from their remaining three players.

They didn’t have to wait long, as No. 109 Vale caught fire after losing the first set in a tiebreaker to Volunteers junior Angel Diaz. A 6-3 win paved the way for Vale to mirror Shelton, going up 5-0 and dropping a point before getting his serve back. Up 40-30, Vale delivered a huge slam that Diaz could not return and celebrated with a massive fist pump.

The Gators had taken down the No. 1 team in the country.

Though the Volunteers had lost earlier in the week to South Carolina, a team UF beat just a week ago, they remained the team to beat in the SEC coming into the match. Now, one would imagine that title shifts back to the Gators after starting off conference play with four-consecutive victories over top-10 opponents.

Though the overall match had already been decided, the athletes stayed out to finish their battles.

No. 93 Andy Andrade won the first set against Mitsui, but struggled from that point on and lost in three sets. Mattias Siimar, on the other hand, split the first two sets against Tennessee freshman Conor Ganon but used his experience to outlast the youngster in the third set.

The Gators will take a short break from conference play to host Illinois Wednesday. Doubles play begins at 5 p.m. in the Alfred A. Ring Tennis Complex. 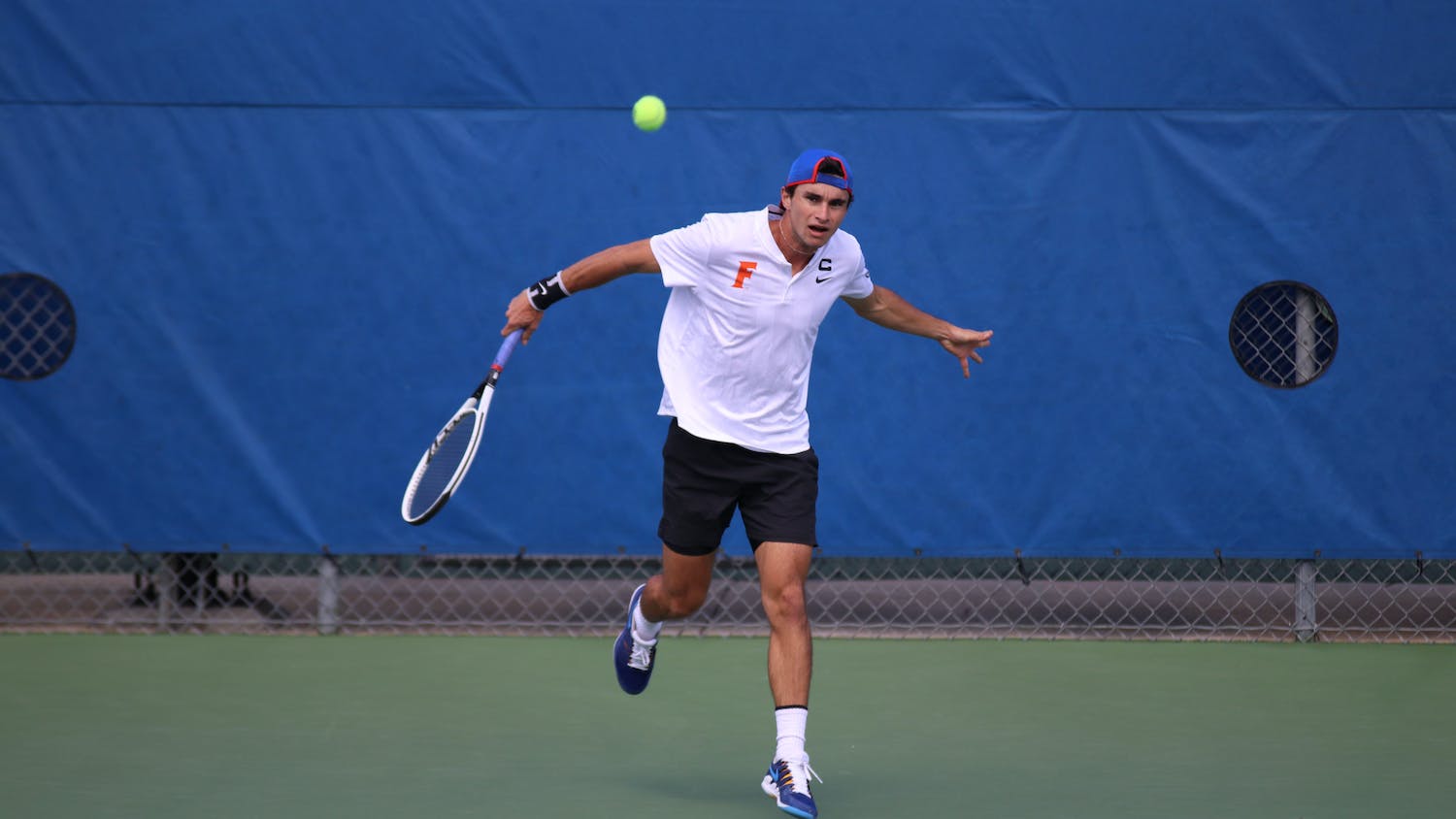 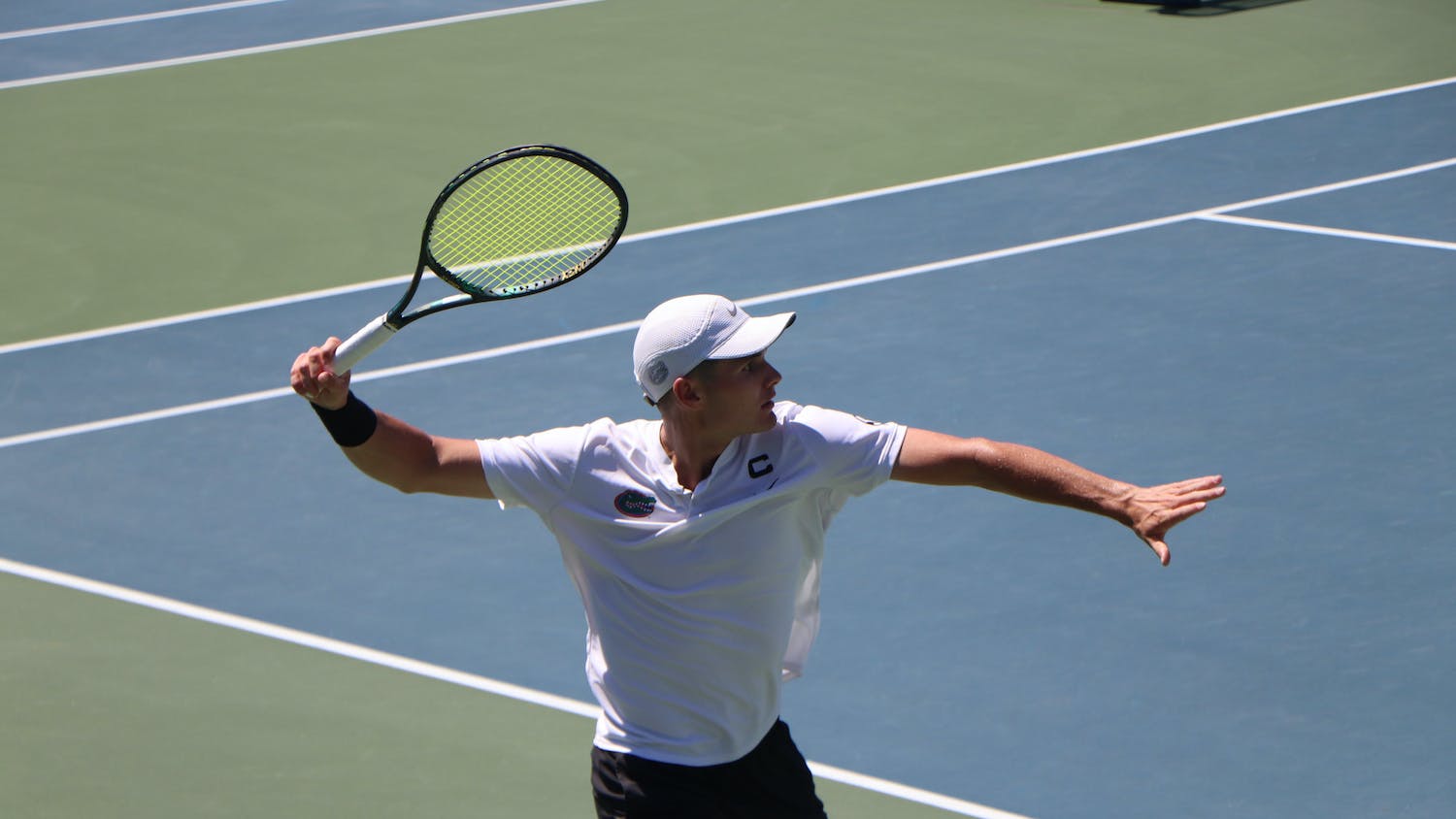