Hannah Adams returned to lead the Gators to victory

Katie Seashole Pressly Stadium erupted in cheers as senior second baseman Hannah Adams was greeted with a standing ovation from Gator Nation Wednesday as she was announced in the starting lineup.

After missing 14 games due to a left-hand injury, the Hoschton, Georgia, native returned to play and seamlessly stepped back into her veteran role.

“I worked pretty hard when I was sitting to make sure that I was getting stuff done to where I would be ready when I came back,” Adams said. “It was my goal to have an impact on the game.”

“This kid’s [Adams] been on my back to get work,” Walton said. “At 8:10 on Mother’s Day she sends me a text message, ‘Hey, I’m gonna come to the batting cages and hit off the tee.’ That was the first day that she swung was Mother’s Day.”

Adams’ extra reps paid off as she went 2-3 at the plate, had a stolen base and turned out elite plays back on the dirt.

“The way she [Adams] played today, never felt like she left,” Kendra Falby said. “She’s been a great teammate.”

With an electric first inning, UF capitalized on its elite base running and speed to scratch across the first two runs of the game.

Freshman outfielder Falby wielded her lightning-fast speed once again. Watching Aggie catcher Haley Lee’s throw down to second base, Falby saw her opportunity to earn the first run of the night for Florida. She slid in just before the tag could be applied to put UF up, 1-0.

Falby shared the spotlight, though. With one out, senior third baseman Charla Echols sent a blooper to left field to bring in Adams.

Freshman designated player Regan Walsh didn’t miss out on the fun sending a sacrifice-fly to right-center field that allowed Echols to strut home.

The bats were alive and well for the orange and blue, and as Walton says, “speed doesn’t slump.” He was proven right Wednesday.

By the time the Aggies picked up the third out of the inning, UF was up 3-0.

Falby used her wheels once again in the bottom of the second to secure the fourth run of the game for Florida.

The UF program season-high for stolen bases is 129 and was set during the 2007 season. With 3 stolen bases in the game, the Gators crept closer to breaking their record and currently sit at 122 this season.

The Aggies struggled to hone in on senior pitcher Elizabeth Hightower. They went for three hits, left six runners on base and earned just one run.

UF also turned in its 23rd and 24th double plays of the season, making for a pair of quick innings and “lets go, Gators” chants from fans.

“Just having Gator Nation behind us, like that’s really what I felt up to bat,” Falby said. “It was like ‘wow’... I have my teammates but then I also have 2,000 people behind me rooting for me too.”

With the victory, Florida advanced to the quarterfinals Thursday against No. 5 Kentucky.

“We’ve got a lot of work to do,” Walton said. “It doesn't matter who we play from here on out, it’s gonna be a lot of work.”

The Gators and Wildcats’ first pitch is scheduled for 5 p.m. and can be streamed on SEC Network. 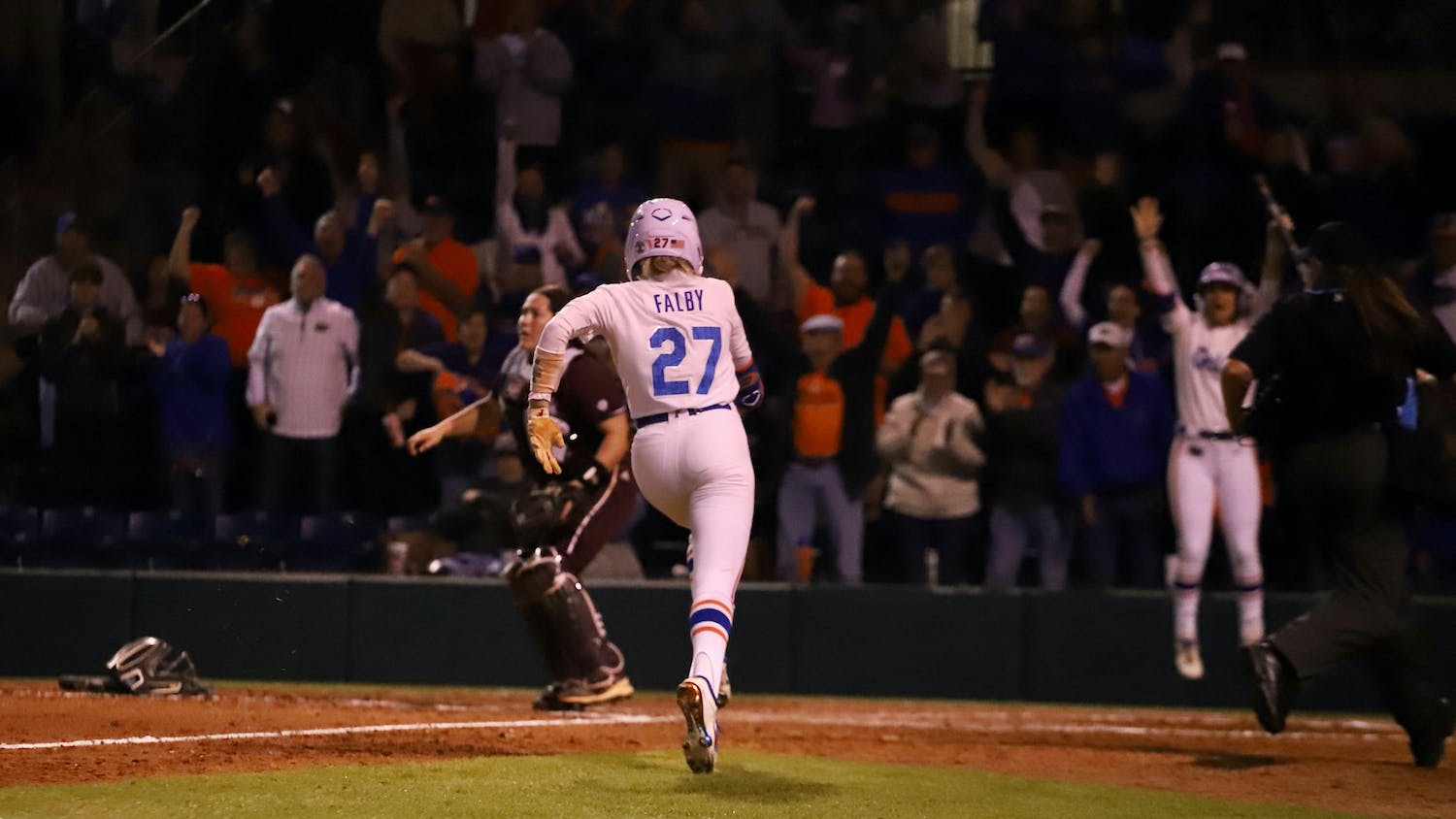