As tragedy after tragedy saturates the media, Giancarlo Rodriguez finds himself numb to gun violence — a scary confession, he admits.

The normalization started when Rodriguez, a 20-year-old UF anthropology junior, witnessed Orlando mourn after the Pulse nightclub shooting June 12, 2016. He said it was an attack on his people: his hometown peers and the LGBTQ community.

The Pulse shooting, which killed 49 people and injured 68, remains the second deadliest mass shooting by a single gunman in modern U.S. history, but the devastation and mourning Rodriguez felt six years ago became cyclic.

His frustration grows with every shooting, he said. Seventeen lives lost in Parkland in 2018. Ten lives in Buffalo last month. Twenty-one lives in Uvalde two weeks ago. Three lives in Philadelphia Saturday night.

“You see all this stuff happening and then the people in charge and in government do the bare minimum or don't do anything at all to solve these problems,” he said. “It’s just unacceptable. We as Floridians and Americans, we should not accept that.”

Gabriela Montes didn’t understand the reality of gun violence in America until police shattered her Marjory Stoneman Douglas classroom door on Valentine’s Day four years ago. She didn’t realize it was more than a routine active shooter drill until 17 people — including three of her friends — were dead.

Students returned to class at the Parkland high school weeks later, but the nation’s grief persisted, surging after each mass shooting that ensued.

After the massacre, Florida legislature passed the Marjory Stoneman Douglas High School Public Safety Act, which outlined reforms to make schools safer and restricted firearms from people who are younger than 21 or mentally ill. It has revisited the subject every year since 2018.

Florida ranks No. 4 nationwide in school shootings with 74 incidents since 1970.

“While it is unfair to say for certain,” Rep. Chuck Clemons, R-Newberry, wrote in an email, “It is quite possible that had Texas implemented our policies wholesale, the tragedy in Uvalde could have been averted or, in the very least, dramatically limited.”

Alachua County’s congresswoman, Rep. Kat Cammack, R-Fla., staunchly supports Second Amendment rights and opposes legislation that would limit gun ownership by law-abiding people, she wrote in a tweet in 2021. She is outspoken in disputing a federal gun registry, saying it is an overreach of government. She did not respond to The Alligator’s request for comment.

Florida’s response to the tragedies in Buffalo and Uvalde have not been enough, though, Rep. Yvonne Hayes Hinson, D-Gainesville, wrote in an email.

“Necessary legislation should have been enacted long ago, and we owe the victims and their families sensible gun legislation,” she wrote.

But Florida law limits city governments from reforming regulations. Any municipality that issues a local ordinance regulation on ammunition and firearms inconsistent with statewide statutes faces a $5,000 fine.

David Arreola, a Gainesville city commissioner running to be the next mayor, is a plaintiff in a lawsuit challenging the state law. But for now he looks to the capitol for solutions to the gun crisis.

“The only government more powerful than the state government is the federal government, and they need to step in,” he said.

Commissioner Harvey Ward, who is also a mayoral candidate, advocated beyond banning the sale of firearms. He said a return to the Clinton administration’s assault weapons ban would be most appropriate.

Amid nationwide discourse on how to best handle the gun violence epidemic, Montes, now a 19-year-old UF psychology sophomore, reflects on the anxiety — but also the hope — she felt after tragedy struck her Parkland high school.

“I think that sense of community and the sense of love that we would feel from one another was something that really kept me going,” she said.

The Alachua County community banded together, finding solidarity while protesting in orange Friday, Saturday and Sunday.

Orange, the color hunters wear to protect themselves in the woods, is now the defining color of the Wear Orange movement. The annual three-day event began on June 2, 2015 in honor of Hadiya Pendleton, a 15-year-old who was shot and killed on a Chicago playground in 2013.

“This is a weekend where we remember the people that have been taken from us, we honor the people who are surviving, who are moving forward with that kind of trauma and we join our voices to demand a future free of gun violence,” Marnie Wiss said.

Seventeen miles away, about two dozen community members gathered in Alachua’s Maude Lewis Park to commemorate recent gun violence victims. Rev. Gregory Pelham spoke as children populated the playground near the basketball court, serving as a stark reminder of how often the youngest are at the front lines of the gun violence epidemic.

He believes churches play a role in mitigating the crisis.

“All of us come together under one common goal, and that’s stopping the violence and saving lives of our young people,” he said.

About 100 people gathered in the park again Saturday for an event to draw attention to gun violence and memorialize four local victims who were killed in Alachua in the last five years.

Among the attendees was Susan, a 68-year-old Gainesville resident, who preferred not to share her last name. She lost her 16-year-old grandson, Stoney Shine Jr., on Oct. 31, 2021 when he was gunned down in the park. He was one of the victims honored Saturday, and his name was displayed on a white cross memorial presented to his family at the end of the event.

Susan fondly recalled her grandson’s ambition to become a football player to be able to support her.

“That’s the Stoney dream,” she said. “Stoney was a smiling child. He smiled all the time. He loved his family.”

Saturday also provided Robin Lillie, a Gainesville resident, a chance to honor her son, Tyler Pearson, who was fatally shot in his apartment in 2019. He was 29 years old.

She spoke to about 50 attendees who wiped tears from their cheeks outside Porters Community Center. The event was organized by Moms Demand Action and Faye Williams’ M.A.M.A.’s Club as part of the local We Wear Orange campaign.

Each time Lillie catches wind of another shooting, she immediately thinks of grieving parents like Stephanie Scott.

As the one-year anniversary of the death of Scott’s son nears, the Gainesville resident found solace in carrying on the voice and legacy of her 13-year-old, Christopher. He was one of five teenagers shot in Gainesville’s American Legion Hall June 24, but he was the only one to die.

She said she thanks God for the years she spent raising Christopher, but they were cut short: a mother’s biggest fear.

“No parent should ever have to bury their child,” Jennifer Dungan, a 43-year-old Moms Demand Action volunteer, said. “It shouldn't be this way.”

Dungan now worries about dropping her son off at school. Every morning as he gets out of the car, he tells his mom he loves her and she is left unsure if she will see him in the afternoon carline —  a crushing feeling.

She cannot help but wonder what each child lost in a school shooting would have accomplished in their life, had they been given the chance.

Fernando Figueroa and Namari Lock contributed to this report. 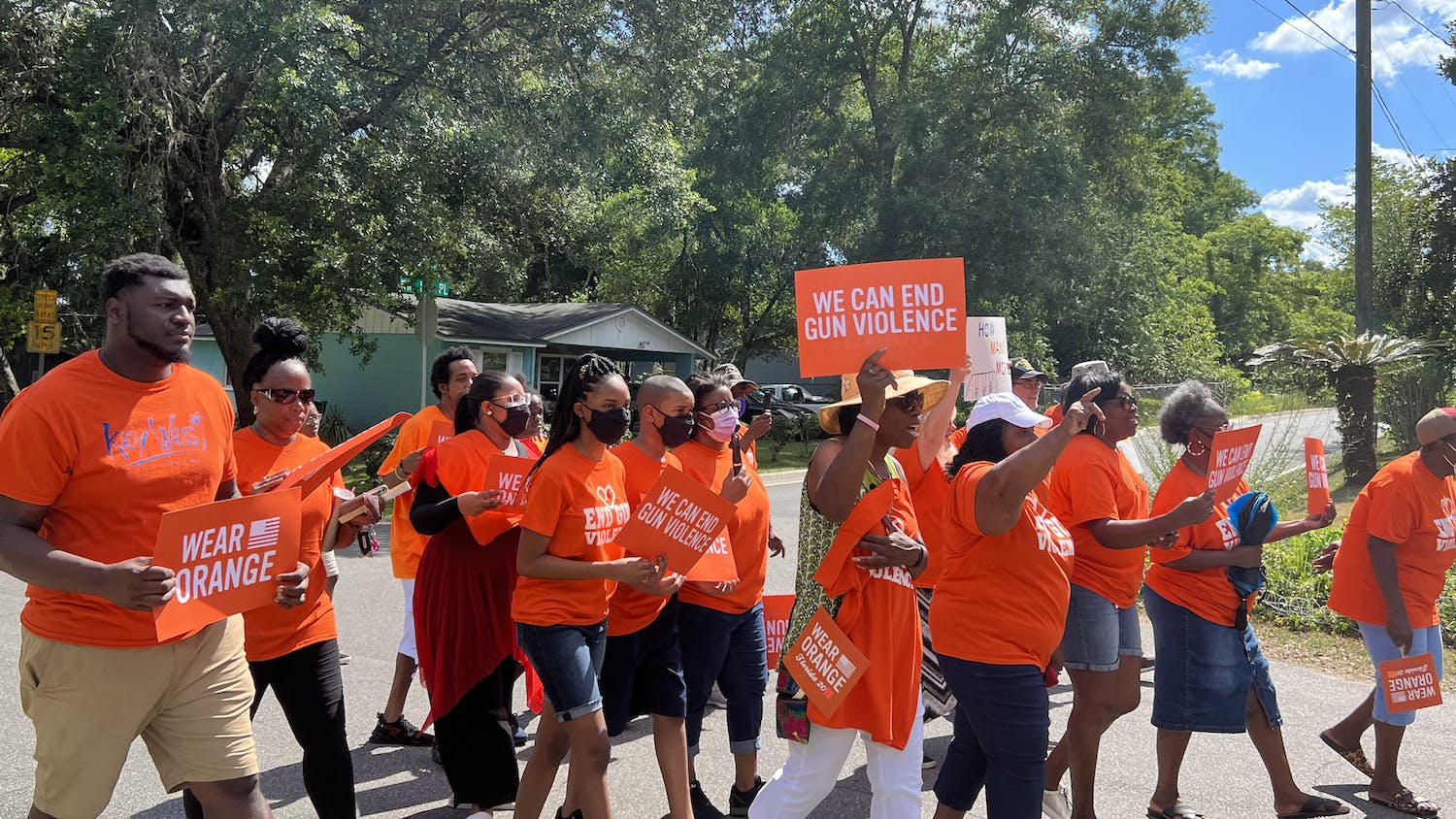