The three frontrunners based on campaign finances discuss the upcoming race

On the campaign trail, they’ve focused on issues such as affordable housing, Gainesville Regional Utilities rates and climate change.

Voters can vote early in primary elections at any Alachua County precinct location until Aug. 20 or vote on primary day at their designated precinct Aug. 23.

David Arreola has served as the District 3 commissioner since 2017 and is the youngest city commissioner ever elected. If elected, he would also be the first Hispanic mayor in Gainesville history.

A Gainesville native, Arreola has lived in the city for 22 years. The 31-year-old attended Gainesville’s public schools, earned his bachelor’s degree in political science from Flagler College and master’s degree in business administration from St. Leo's University, worked for local businesses — including Florida Credit Union and Pomodoro Café — and serves on a board for Family Promise of Gainesville.

Arreola said voters will value his experience with housing, immigrants and youth opportunities.

“I'm very set on having a goal by 2030 to have a reduction of carbon emissions in the city, both by GRU and by the general population,” he said.

The commission will roll out climate change responses in coming months, as two coal-fire plants — which help power the city — are set to retire.

“If we're going to ask customers to pay high bills, we should be willing to cut back on our spending,” Arreola said.

Edward “Ed” Bielarski, a 65-year-old Gainesville resident of seven years, served as the general manager of GRU since June 2015.

The commission terminated his contract in January, although more than 200 residents opposed the decision in September and forced the City Commission to reconsider.

“My job wasn't finished in helping the city,” Bielarski said. “But as mayor, I knew that I could.”

Bielarski has 40 years of experience working as an executive in the utility business, he said. While working for Constellation and Exelon — two energy providers in Pennsylvania — he said he worked regularly with town councils, state legislature and Congress.

“We need to end the addiction that the City Commission has to GRU customer money,” he said.

Bielarski said he would help shift the commission's priorities away from single-family zoning changes to protect against gentrification, specifically in East Gainesville.

To combat the housing crisis, Bielarski said he plans to increase local job opportunities, offer skills training and end the disparity between education in different areas of town.

"I always had my hand in working with local governments,” Bielarski said.

Ansaun Fisher coaches the Florida All-Stars and the Florida Lady All-Stars, which are pro basketball teams in Gainesville. He uses these experiences to mentor and stay connected with city youth.

The 43-year-old majored in finance and global marketing at Bethune Cookman and Santa Fe College.

Fisher said his experience as a youth coach and mentor would improve the city’s relationship with city officials and residents, specifically youth.

“I'm already doing it. I understand the importance of it,” he said. “Working with them hand to hand, upfront with them, providing structure to making them understand that they could turn away from violence.”

The current gun violence rate, Fisher said, will be problematic for the elderly, college students and tourists by the year 2023 if it's not controlled now.

Fisher said he will provide access to housing and focus on children, veterans, the elderly and the homeless. He opposed the City Commission’s plan to eliminate exclusionary zoning and said he never had faith in the City Commission to listen or provide care to residents, especially in East Gainesville.

“It's divided in the city,” he said. “It's not the same treatment in no aspect of the city whether it’s patrolling the crime, whether it’s the wealth of citizens.

Gary Gordon grew up in Gainesville and discussed politics at the dinner table every night — something he said wasn’t taboo for his family.

The 69-year-old served as a Gainesville city commissioner in 1983 and mayor-commissioner from 1985-86. He left to work as the executive director of a merchant association in Santa Monica, California, for 19 years but returned to Gainesville in 2017.

Residents encouraged him to join the mayoral race, but Gordon said his decision came from his dissatisfaction with the candidate pool.

“When I saw who was running for mayor, I literally thought I cannot picture myself going into the voting booth and voting for any of them,” he said. “So I'm going to have to run.”

Gordon said his experience in municipal government, land-use zoning, budgets, and citizen engagement is unmatched compared with other candidates. One of his top priorities would be to  save single-family zoning, which the current commission plans to eliminate after an initial vote Aug. 4.

He also addressed the need to reduce general fund transfer and identify waste within the utility system to help decrease residents’ utility rates. However, Fisher said, residents have built-in rates to accommodate for fuel cost increases and GRU’s bonded indebtedness, which are factors out of the commission’s control, he said.

After the commission fired the city’s auditor, an external audit found misstated and untimely city financial reports for more than three years. Gordon described himself as a “budget hound,” which he believes the city needs to sort out its finances.

Gordon also emphasized the importance of citizen engagement. He said he already proposed a citizen budget review committee, a group of representative community members that meets regularly with city staff to review each department's budget. While there might not be consensus, Gordon said, it will help the city move forward.

He suggested a similar jobs task force to help remove the divide between the commission and the business community and strengthen the job market.

Gabriel Hillel, an 87-year-old Gainesville resident of 30 years, said he is running as a “whistleblower” to identify and challenge Gainesville’s alleged historically southern Democratic control.

He posts daily through his Florida Freedom Summer of 2024 campaign.

Hillel wants to increase access to public records, include UF in city plans and encourage student voters to participate in local government and elections.

“Conditions have gotten a lot worse in Gainesville east than they have back in 1997,” Hillel said.

Housing can only be planned with the University of Florida, which wants students close to campus, he said.

Adam Rosenthal, a 37-year-old Gainesville resident of 10 years, decided to cancel a Caribbean cruise — where he intended to celebrate his birthday and attend Santa Claus school — to run for mayor.

“I wanted to instead invest in my community in a different way that's going to have long standing effects for everyone here,” he said.

He first got involved in seasonal Christmas work in 2010 when his neighbor retired the Santa suit, and Rosenthal said ​​he would continue the work regardless of the election’s outcome.

Rosenthal gained experience in government by shadowing his state senator. He said his goal is to bring hope back into local government by listening to constituents, unite residents regardless of economic background and focus on public transportation.

“I want to be able to bring that faith back into the system by finding out a way to just have there be more open conversation so that you don't need to necessarily attend the events in order to have your voice heard,” he said

Rosenthal’s experience with homelessness in Gainesville — which he said ended when a local business owner provided a place for him to stay — drives his passion to help the city’s homeless community through increased mental health and individual living resources.

“It's not going to defeat the love I have in my heart for the city,” Rosenthal said.

According to his Facebook page, Shepherd believes he’s an advocate for the people.

“Everyone deserves to have a peaceful life,” his post said. “I want people to have better lives.”

July Thomas, a 31-year-old activist and data scientist, has lived in Gainesville for a decade.

Their friends and other community leaders encouraged them to run for mayor, they said.

Thomas received their associate degree at Valencia College, bachelor's degree in mathematics and master's degree in physics at UF. They are finishing their PhD in computational astrophysics.

They worked at an education technology company in Gainesville, plugged into the community through activism and independently studied Gainesville’s history and real estate.

Thomas wants to rethink the culture within City Hall, the city’s development ideology and local economic development, including the environment and supporting local businesses.

Their plans to rethink the city commission’s interaction with other city hall staff and consider their skills and expertise would create a more cohesive government, they said.

Their second priority is to rework the city’s development, which the current model, they said, destroys the community’s economic activity and walkability.

“In their quest to build these walkable communities, they've actually decreased the walkability of the community.”

They also plan to prioritize local economic development. As an opponent of the city’s elimination of exclusionary zoning, they said it was a waste of resources and furthered gentrification in East Gainesville.

To lower GRU rates, they plan to transition back to a revenue- or profit-based model and make up for budget shortfall by building a grant writing program through UF or relying on the community rather than outsourced contractors and consultants.

“We clearly have demonstrated, unfortunately, that our City Commission cannot be trusted to manage GRU properly without somehow being tied into the actual revenue that GRU is making,” Thomas said.

Harvey Ward, who has served as the District 2 commissioner since 2017, is a lifelong Gainesville resident.

The 54-year-old said he worked as a fundraising consultant in the nonprofit community prior to serving on commission. His advocacy efforts extend to the arts community and homelessness.

Ward said he hopes to address the importance of tackling the national affordable housing crisis with a local response.

The commission has already allocated $8 million of American Rescue Plan funds to affordable housing, he said. But it shouldn’t stop there.

“We need to keep the pressure up on that to make sure that we deliver for our neighbors who need affordable housing with those funds,” Ward said.

Renewable energy is another issue Ward said will appear at the top of city agendas for decades. He wants to focus efforts toward making the city reliant on 100% affordable renewable energy.

While he said the commission has made progress with the Florida Department of Transportation, he still wants to emphasize more traffic safety initiatives after multiple recent pedestrian deaths on West University Avenue.

“I have an obligation to make sure that this town thrives and that the people who live here have a great city to live in,” Ward said. 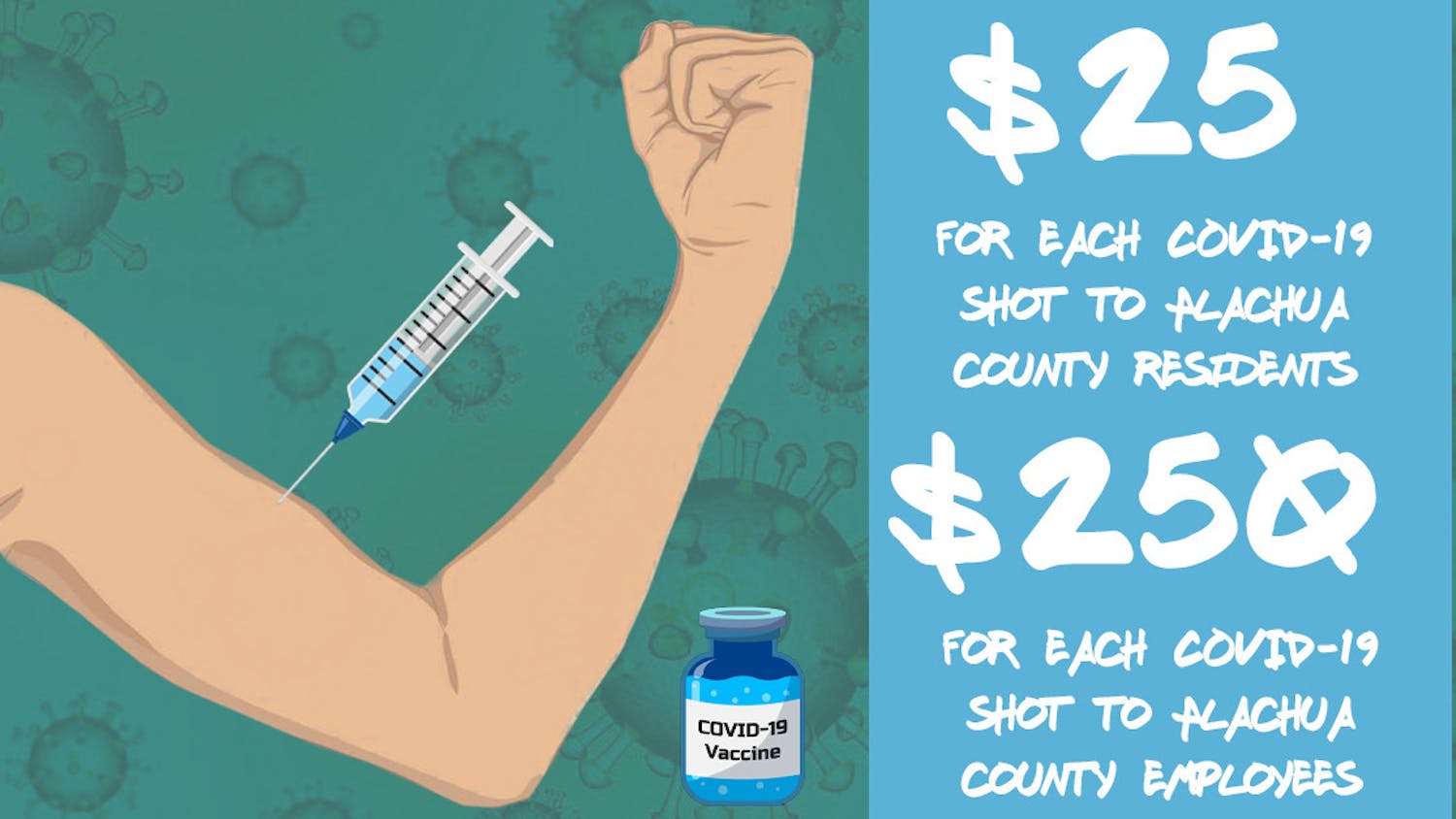 Want an extra $50? Get vaccinated in Alachua County