The momentum was undeniably on South Carolina’s side of the court.

An upset over No. 12 Florida lay in front of them, even after having been down two sets to one earlier in the match.

Gamecocks junior outside hitter Riley Whitesides rose to the left side of the net and pounded home the final kill that, upon a replay confirmation, nailed down the decisive fifth set masterpiece for the hosts.

It is Florida’s first loss in Southeastern Conference play and a tough blow for a squad that was one set away from a weekend sweep.

Whitesides led the way for the Gamecocks with 16 kills. South Carolina’s defense was a major factor in the victory, with junior middle blocker Ellie Ruprich totaling eight blocks and fifth-year libero Jenna Hampton racking up 18 digs, doubling her total from yesterday’s game.

Florida outside hitter Merritt Beason put up 17 kills, giving her 35 for the weekend.

The opening set featured excellent serving from Florida and an equally solid defense from South Carolina. The Gamecocks scored the first point on a bad set from freshman setter Alexis Stucky before sophomore middle blocker Gabrielle Essix got the Gators on the board with a block assist and kill. Back-to-back finishes from sophomore middle blocker Bre Kelley and senior outside hitter Marina Markova put Florida ahead 6-4.

South Carolina equalized at 9-9 on a kill from Ruprich and an attack error on UF’s Sofia Victoria. The first three-point rally arrived later in the set for Florida on a service run by Stucky, who engineered an Essix kill to give the Gators a 17-13 lead. Florida continued its outside attack with consecutive kills by Victoria to make it 20-15. Another three-point run featured two attack errors on South Carolina and prompted set point for Florida.

Markova’s team-leading fifth kill of the set, a strong ball to the back left corner, sealed the first set victory of the afternoon for the Gators.

South Carolina responded with a win in the second set, its balanced attack proving too much to bear for Florida. Fifth-year setter Dalaney Hans got it started with a service ace which deflected off Markova. Beason evened up the set with a kill before the Gamecocks put up three in a row to take a 4-1 lead.

Following another South Carolina ace, a Beason service run got the Gators back in the set. The Alabama native recorded three straight aces from behind the service line, using the entire court to her advantage to tie the set at seven.

The Gamecocks snatched the momentum back with a three-point run capped off by a Markova attack error to carve out a 13-9 lead. Florida drew back to within one on back-to-back South Carolina attack errors and a kill from Markova. The Gators took advantage of more mistakes from the Gamecocks, including a service and attack error to finally tie up the set at 20.

It would be for naught, as South Carolina won five of the final six points to put the second set away. A Lauren McCutcheon kill was the final blow to tie the match.

Although the Gators locked up the set three win, South Carolina’s defense was the story. After Florida took a 4-0 lead on a Markova kill and two Essix blocks, South Carolina put up three in a row on a pair of crucial blocks from sophomore middle blocker Oby Anadi.

The Gators were able to create some separation on a four-point rally on another Beason service run to make it 10-5. Florida maintained its lead as both teams traded kills. The Gamecocks relied on Whitesides to find holes in the Gators defense, who racked up three kills in the set. A trio of points from South Carolina, including a Camila Covas service ace, shaved the deficit to two, 17-15.

Florida displayed its resolve, taking eight of the final 10 points of the set, including five straight, to win the third set.

With their back against the wall, the Gamecocks delivered in the fourth set. They again relied on the front row to come up with blocks against Florida spikes. Kills from Beason and Kelley handed the Gators a 5-4 lead, which they held until a Covas service ace put the Gamecocks ahead 7-6.

Florida won six of the next eight points to take a 12-9 advantage, but South Carolina answered back with a run of four on three Florida errors. Down 19-17, Beason smashed three kills in four plays to tie up the fourth set at 20. South Carolina outlasted the persistent Florida offense by reigning in five of the last seven points to force a winner-take-all fifth set on a McCutcheon kill.

While the Gators did take a 4-2 lead early in the final set, South Carolina decided to play its best volleyball of the afternoon through the remainder of the frame. A service run from sophomore setter Claire Wilson featured two aces and two Gators attack errors on a six-point ambush that gave the Gamecocks a 9-4 lead.

Two plays later South Carolina went on another tear, this time for five. Four kills in a row, including three from Whitesides, set up match point. Florida outlasted South Carolina for three more plays, but Whitesides’ 16th and gave the Gamecocks their first win in SEC play.

Florida will have the next week off to regroup and will next take the court Wednesday, Oct. 5 on the road in Knoxville, Tennessee. First serve against the Tennessee Volunteers is set for 7 p.m. and the game will be broadcast on ESPN2. 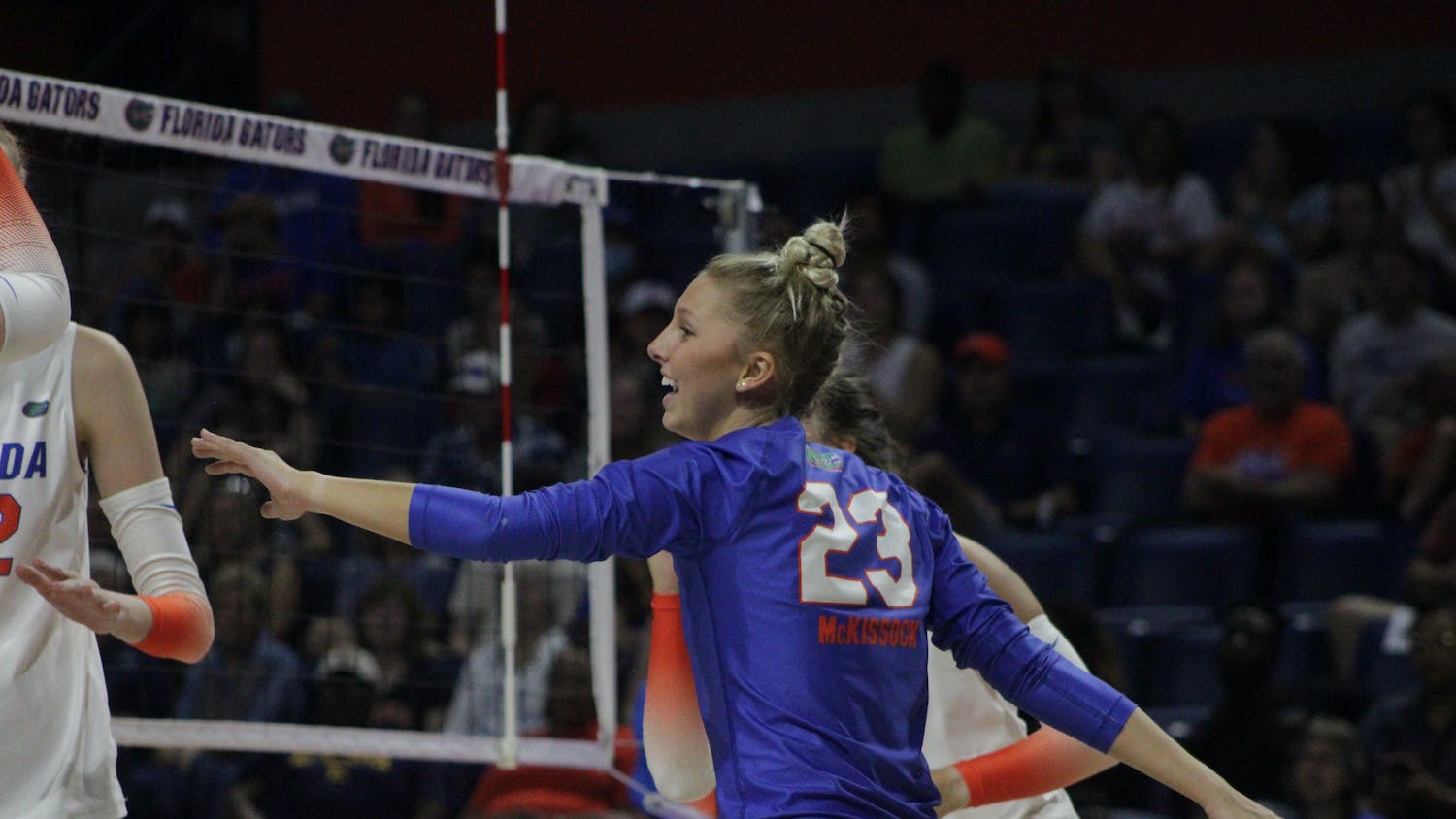 No. 16 Florida upsets No. 4 Wisconsin in front of largest regular-season crowd ever