As his eight-year tenure comes to an end, UF President Kent Fuchs is leaving behind a complicated legacy.

In a sit-down interview with The Alligator, Fuchs shared his thoughts on how extensive he wished COVID-19 regulations at UF could have been, the scariest moment of his presidency and his personal disagreement with officials about perceived indoctrination on campus.

At Fuchs’ inauguration ceremony in 2015, he said creating a more diverse student body and making UF academics nationally recognized were among his presidential goals. From handling COVID-19 on campus to achieving top-five public university status, Fuchs’ years at UF were eventful.

“I’ll miss the job,” Fuchs said. “But it’s also fun to be around this university and to be able to engage with all of it.”

Fuchs, 67, announced in January he’d step down from the presidency at the end of the Fall semester, and the university launched a search for his successor.

Fuchs’ decision to step down came in summer 2019, after the Board of Trustees — the university’s governing body — formally extended his appointment as president. Fuchs’ family were the only ones to know until August 2021, when he told administration. By January 2022, his announcement was public.

The role is largely flexible from president to president, Fuchs said.

His approach doesn’t include making decisions for individual colleges. Fuchs delegates most academic decisions to UF Provost Joe Glover or other intentionally chosen administrators and staff.

“I give them a lot of freedom to soar or to crash and burn and live with those consequences,” Fuchs said.

The university also saw scandal over the past eight years, with issues of academic freedom and skepticism over administration’s handling of the COVID-19 pandemic casting a dark cloud over Fuchs’ accomplishments.

It wasn’t within his power to require UF students and faculty to mask or get vaccinated due to state regulations, Fuchs said.

But he would’ve made vaccination mandatory — his brother, who wasn’t vaccinated, died from COVID-19 complications.

“If I was, like, king of everything?” Fuchs said. “If I was president, I'd force every citizen of the country to get vaccinated. But that's not our nation.”

Many see UF’s handling of the pandemic in a less positive light — UF Faculty Senate passed a vote of no confidence on Fuchs’ handling of COVID-19 last November. Others felt Fuchs should've been more vocal, advocating for mask and vaccine mandates from state leadership during the height of the Delta variant.

Michael Reid, dean of the College of Human Health and Performance, said he thought Fuchs handled the pandemic well, considering he had to make quick decisions to benefit all.

“The way he did this, caring always first and foremost for the safety of our students and our staff and our faculty, really inspired me,” Reid said.

Fuchs also faced scrutiny when three UF professors were barred from testifying as expert witnesses in a 2021 voting rights case against the state of Florida.

To participate in outside activities that involve the university, like lawsuits, employees must file a conflict of interest report. When the professors’ requests were denied, the press was aware before he was. As soon as he and Glover found out, he said the decision was reversed.

Since then, Fuchs said the process has changed so Glover has the final say in whether a report is approved. Fuchs himself doesn’t have a say.

“It's the most robust process now for approvals or denials of outside activities, conflicts of interest and conflicts of commitment in the nation,” Fuchs said. “We've taken something that was negative and made it a positive.”

Under Gov. Ron DeSantis’ administration, some UF community members were concerned with what they saw as encroachment from the governor’s office. The fast-tracked hiring of DeSantis-approved Florida Surgeon General Joseph Ladapo served as one major point of concern.

Fuchs denied the idea, saying neither DeSantis nor his chief of staff have ever contacted him directly. He opposes government regulation on the university altogether.

Rather, Fuchs sees a disconnect between the state government and the university. Concerned about “woke indoctrination” in public education, DeSantis signed House Bill 7, commonly known as the Stop WOKE Bill. However, Fuchs denied indoctrination is taking place at the university, whether liberal or conservative.

“I don't agree with a genuine perception by many elected officials that this is a university where we're here to indoctrinate our students,” Fuchs said.

A list of anti-racism initiatives were another test for Fuchs’ administration after the murder of George Floyd. Under Fuchs, UF’s non-white student population has increased by 3.62% from 2015 to 2021. However, one anti-racism initiative still garners criticism to this day: the ban of the “Gator Bait” game day chant due to its racist imagery.

His opinions on diversity were put to the test when white supremacist Richard Spencer claimed Fuchs allowed him to be on campus for a speaking event in 2017. In a tweet, Fuchs said he rejected Spencer’s “vile and despicable message.”

Spencer’s speech at the Phillips Center was met with widespread student protest and international news coverage. Although campus leadership — under Fuchs — denounced Spencer’s message, they said his appearance was protected by free speech.

The university paid upwards of $500,000 to mobilize more than 2,000 police officers for campus safety on the day of Spencer’s speech, according to an university press release.

Fuchs called Spencer’s visit the most difficult challenge of his tenure.

“It was scary,” Fuchs said. “Nobody here wanted him. Nobody, as far I know, invited him.”

Fuchs’ tenure was marked by highs as well — such as UF soaring up public university rankings.

UF climbed through the U.S. News’ public university rankings, moving from No. 14 in 2015 to No. 5 in 2021 and 2022. From day one, Fuchs’ focus was to bring UF to the top 10 public research universities nationally. Fuchs boasted all 16 of UF’s colleges have increased their academic excellence, raising the university’s overall standing as a top university nationally.

“I decided that if we were going to do this, in this incredibly visible position, living on campus, all those kinds of things, that we wouldn't dread that or regret it,” Fuchs said. “We would just embrace it and enjoy it.”

Fuchs became the first UF president to create a personal social media account when his Twitter went live in January 2015. Seven years later, he has more than 30,000 followers, as of October 2022. His first Tweet featured a photo of himself with editors from The Alligator captioned, “Hello Gator Nation!”

Todd Sanders, former director of UF social media, helped Fuchs establish his online presence. He said he remembered Fuchs insisting the first post include The Alligator, with whom he was meeting later that day.

“From the beginning, he made it part of the community,” Sanders said. “This is everybody's university.”

For April Hines, the UF journalism librarian, Fuchs’ interactivity with the campus community set him apart from previous presidents.

When Hines attended UF from 2000 to 2004, she said she didn’t know the president’s name, much less felt comfortable asking him for a selfie — an activity Fuchs is famous for among the student body.

“A lot of university presidents are not going to be like, ‘sure, I’ll put on a Darth Vader costume for this social media event,’” Hines said. “I've heard people refer to him as the students’ president. I think that that's probably true.”

“We're intense. We want to beat out all the other universities in all kinds of ways,” Fuchs said.

“But we can also have fun doing it.”

After a year-long search, the Presidential Search Committee unanimously recommended Nebraska Sen. Ben Sasse as the sole finalist to replace Fuchs in an Oct. 6 statement.

Fuchs drew criticism after sending a mass email Oct. 24 reinstating a 1969 regulation prohibiting indoor protests. The email came in light of an Oct. 10 student protest against Sasse’s presidential nomination during which protesters entered Emerson Hall in between Q&A forums with Sasse.

Students who violate the regulation will face consequences outlined in the Student Conduct Code, according to the email.

“I encourage protests and others to speak up,” Fuchs said. “But in general, regardless of what the event is, whether it’s a class or a meeting, at virtually every university, you cannot disrupt the meeting.”

Sasse’s presidential search was kept under wraps due to a new state law allowing the process to stay private. In comparison, Fuchs’ approval was more public, with his name being announced alongside two other finalists.

Sasse awaits approval by the Board of Trustees Nov. 1 before formally assuming the role in 2023.

“I believe he’ll be phenomenally successful,” Fuchs said. “I also believe he’ll set aside his politics, and I suggest we do the same.”

Upon the end of the semester, Fuchs plans on taking a sabbatical before returning to a professor’s role in the department of electrical and computer engineering.

But he’ll likely retire soon, Fuchs said. He hopes his legacy will reflect his work to be more accessible and create a more caring campus community. 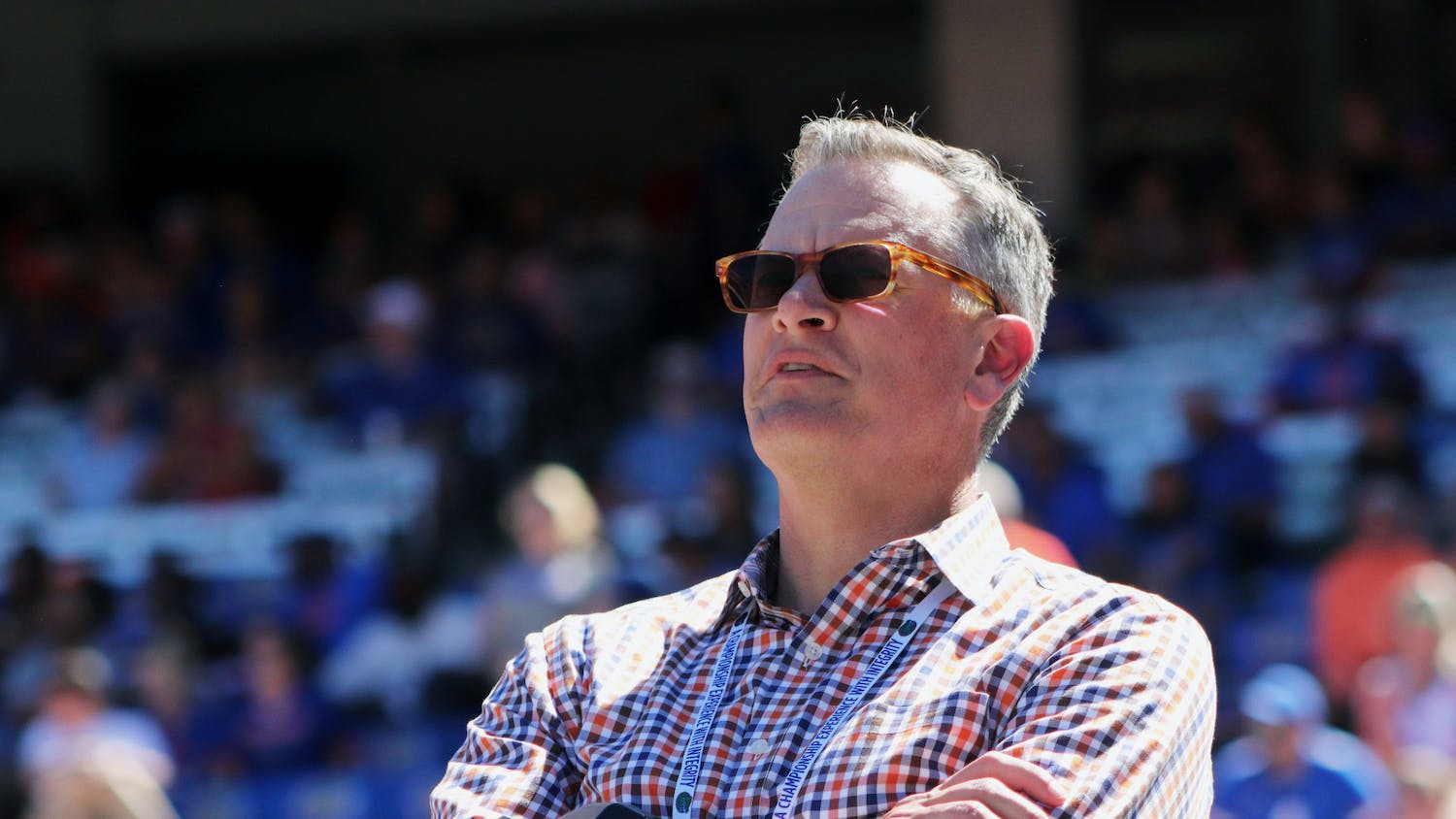 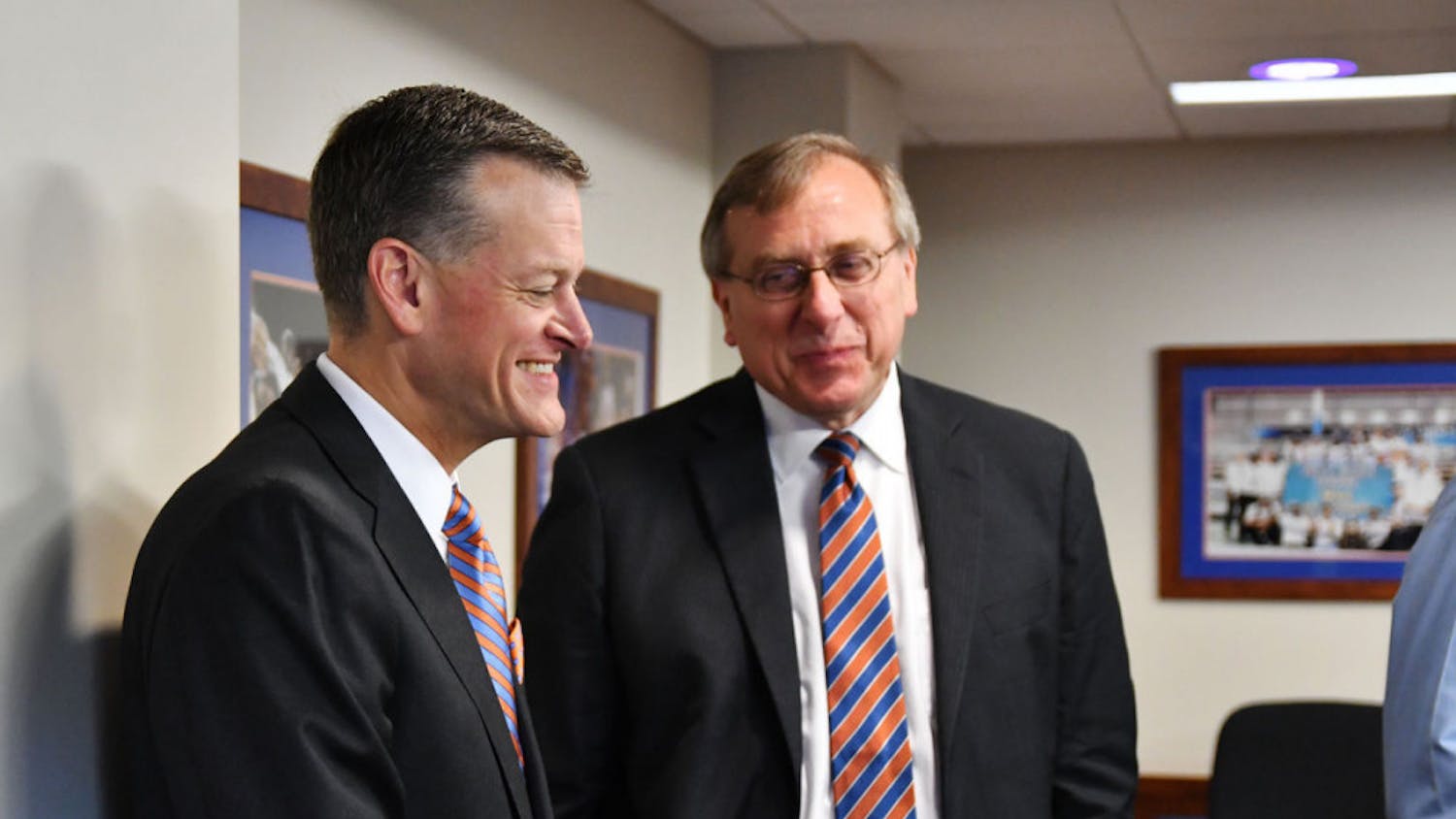 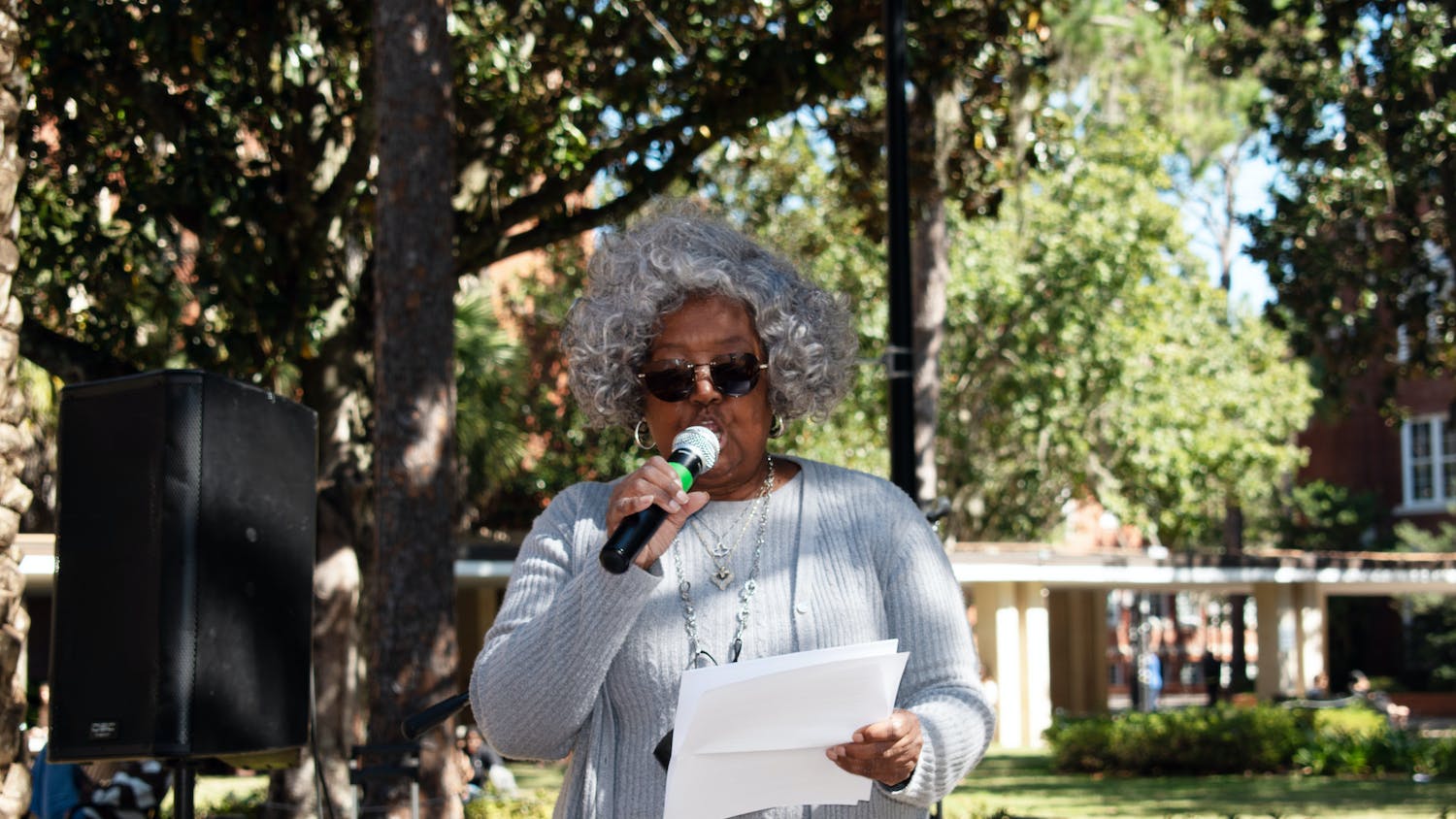 Free UF rally urges students to take to the polls