Fans from near and far came to Gainesville

As the opening techno notes to Flo Rida’s “Low” resonated through the Stephen C. O’Connell Center, the ground shook with the audience jumping with excitement. Arguably the most anticipated song of the night, the words “apple bottom jeans” were on the tips of nearly every tongue in the room.

Then, the music suddenly stopped.

The crowd hushed, confused — but the man of the night, Flo Rida, quickly cleared it up, calling for girls in the crowd to join him on stage. Soon, the stage was its own dance floor as students  got “Low” with the multi-million-stream artist.

Gator Growl followed a morning of Homecoming festivities, including a festival held in Plaza of the Americas, the Gator Gallop race and the Homecoming parade.

The gates to the O’Connell Center opened for Gator Growl at 6 p.m. — just as the hour hit, the line at the gate spanned across the front of the arena and wrapped around the corner. Attendees purchased tickets to the event online beforehand, with options to stand in the pit or to sit in upper levels.

Jenna Karli Goodwin, a 19-year-old UF business administration sophomore, stood with two friends holding poster boards that read, “I finally learned what ‘Whistle’ is about,” “U can spin my head right round any day” and “University of Flo Rida.”

The trio said they loved Flo Rida and came to Gator Growl specifically to see the concert.

By the end of the night, Flo Rida took their signs to keep with him on stage.

It’s also custom for UF alumni to visit campus for homecoming events each year, as was the case for 45-year-old alumna Kristina Thomas. Kristina, her husband and their two sons — 7-year-old Justin and 10-year-old Timmy — visited Gainesville from Naples to attendhomecoming events Friday and Saturday. The family waited in line to take photos with mascots Albert and Alberta prior to the show.

This was the first UF Homecoming for Justin and Timmy, but hardly the first for Kristina. She looked forward to seeing Wuerffel, who she said she met several times while she was in college.

“Nothing beats anything in my life, except for the birth of my children, than being here for five years,” Kristina said. “This was the time of my life.”

At 7 p.m., the lights dimmed and the show started with a video introducing the audience to the event, followed by the national anthem, sung by Julia Webster.

Six minutes later, Wuerffel made his first appearance as host.

He joked Olivia O’Brien, the opening artist originally scheduled to perform, was missing because it was too difficult to find on-campus parking. In reality, the Gator Growl staff said her absence was due to unforeseen circumstances, which led them to bring Fletcher as a replacement.

Holding a “No. 5” T-shirt out to the audience, Wuerffel also mentioned students should stop stealing “No. 5” banners from campus lampposts and instead buy them in the bookstore.

One such video, which played just after the end of Fletcher’s set, joked about high parking pass prices and poor living conditions in Rawlings Hall.

Another saw President Kent Fuchs attempting to table outside Turlington Hall and promptly being ignored by busy students passing by. The video ended with Fuchs taking a selfie with a group of students and yelling, “Fuchs for life,” an ironic remark considering Fuchs’ imminent resignation from the presidency at the end of the semester.

Before the opening set, football coach Billy Napier and four Gators football seniors came onstage to directly thank the community for supporting the Gators team. A common mantra throughout the night was to “beat Missouri,” the Gator’s opponents on Homecoming day.

Fletcher took the stage to perform her set at 7:23 p.m. She wore purple cargo-style pants and a black top, which was on the verge of slipping off all night, she announced to the crowd. Among her most well-known songs was “Undrunk,” during which several students stood up and sang along.

She also paused between songs to take a fan’s BeReal photos from her position on stage.

Between sets, Gators cheerleaders led the arena in common gameday traditions, chanting “Let’s go Gators!” and swaying to “We Are the Boys from Old Florida.” Wuerffel filled in the role of Mr. Two Bits, pointing and calling to different sides of the area in preparation for Saturday’s Homecoming football game.

The Dazzlers dance team also performed a brief routine to excite the crowd.

After weeks of pageantry, the UF Homecoming king and queen were announced as well: Noah Fineberg and Dorian Simpkins took the crowns as UF’s top leaders for the year.

As queen, Simpkins said she looked forward to being a role model for other young Black girls.

“I'm proud of everybody because of how much leadership they've displayed,” Simpkins said. “And really excited to be able to represent UF in this way because it's presented me with so many opportunities.”

Wuerffel said his final goodbye as host at 8:40 p.m., signaling the main act would soon come to the stage. The arena buzzed in anticipation as the concert DJ took to his booth, hyping up the crowd before Flo Rida appeared.

As the intro to Good Feeling — one of Flo Rida’s most popular songs, with more than 400 million streams of Spotify — played, the crowd stood, chanted Flo Rida’s name and waved their hands in the air to summon him out.

Donning a white Gators basketball jersey, a black leather vest and black jean shorts with silver-and-gold jeweled chain accessories, Flo Rida came out from backstage at 8:48 p.m. He was greeted with screams and excitement that shook the O’Connell Center floor.

Throughout the set, Rida and his ensemble popped champagne over cheering crowds and threw dollar bills and roses to audience members.

He also called audience members on stage with him periodically: girls joined him onstage for “Low” and “Wild Ones,” while guys had their moments during “GDFR.” Some onstage audience members were given microphones to sing along as well.

One special audience member, 19-year-old UF history freshman Ryan Scott, was called to the stage because it was his birthday the day before; he said he hadn’t celebrated yet, so his special treatment at the show was like a gift. Rida asked Scott to stand in the DJ booth and help him start playing “Whistle.”

Toward the end of the show, Scott was also specially picked to keep Rida’s Florida jersey as a souvenir of the night.

“It was so much fun,” Scott said, holding up the jersey. “I don't know how to put it into words.”

Although Rida himself didn’t attend UF, he frequently mentioned his twin sister did, explaining his close ties with the university. He went as far as to compare UF to his own home — removing his shirt and shoes to “get comfortable” during the show — which led up to his performance of “My House.”

Rida closed the show just after 10 p.m. with a performance of “What a Night.”

Katherine Bi-Ji, a 19-year-old UF statistics and finance sophomore, arrived early to the arena to claim a spot in the front row of the pit. Her efforts came to fruition when she and her friends caught $6 in cash and a sweat rag Flo Rida threw into the crowd during the show.

Bi-Ji said the items represent one more moment among the good memories of her college years.

“I love the high energy that everyone in the crowd brought into the stadium,” Bi-Ji said. “It was honestly contagious. Incredible and very memorable.” 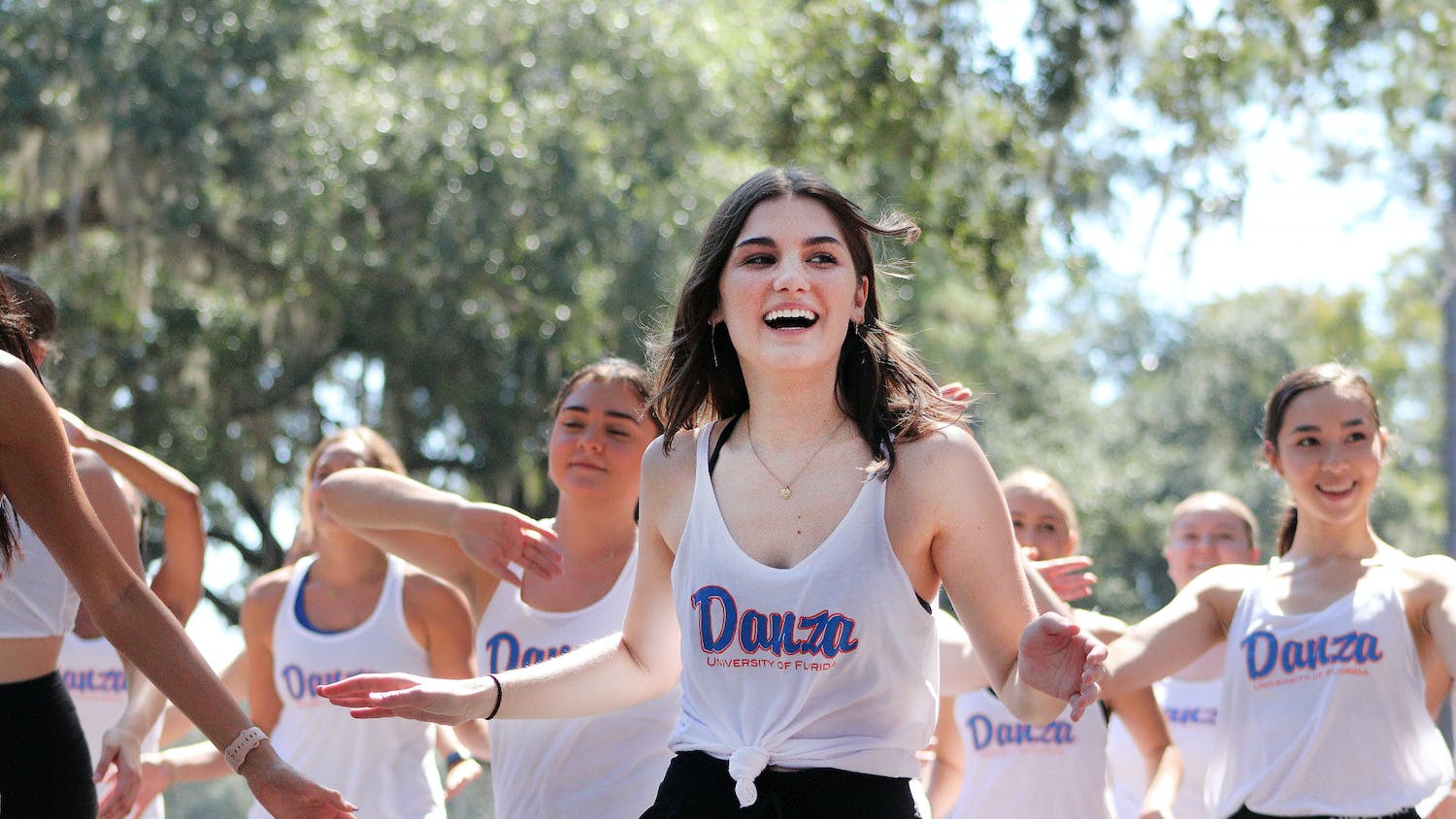 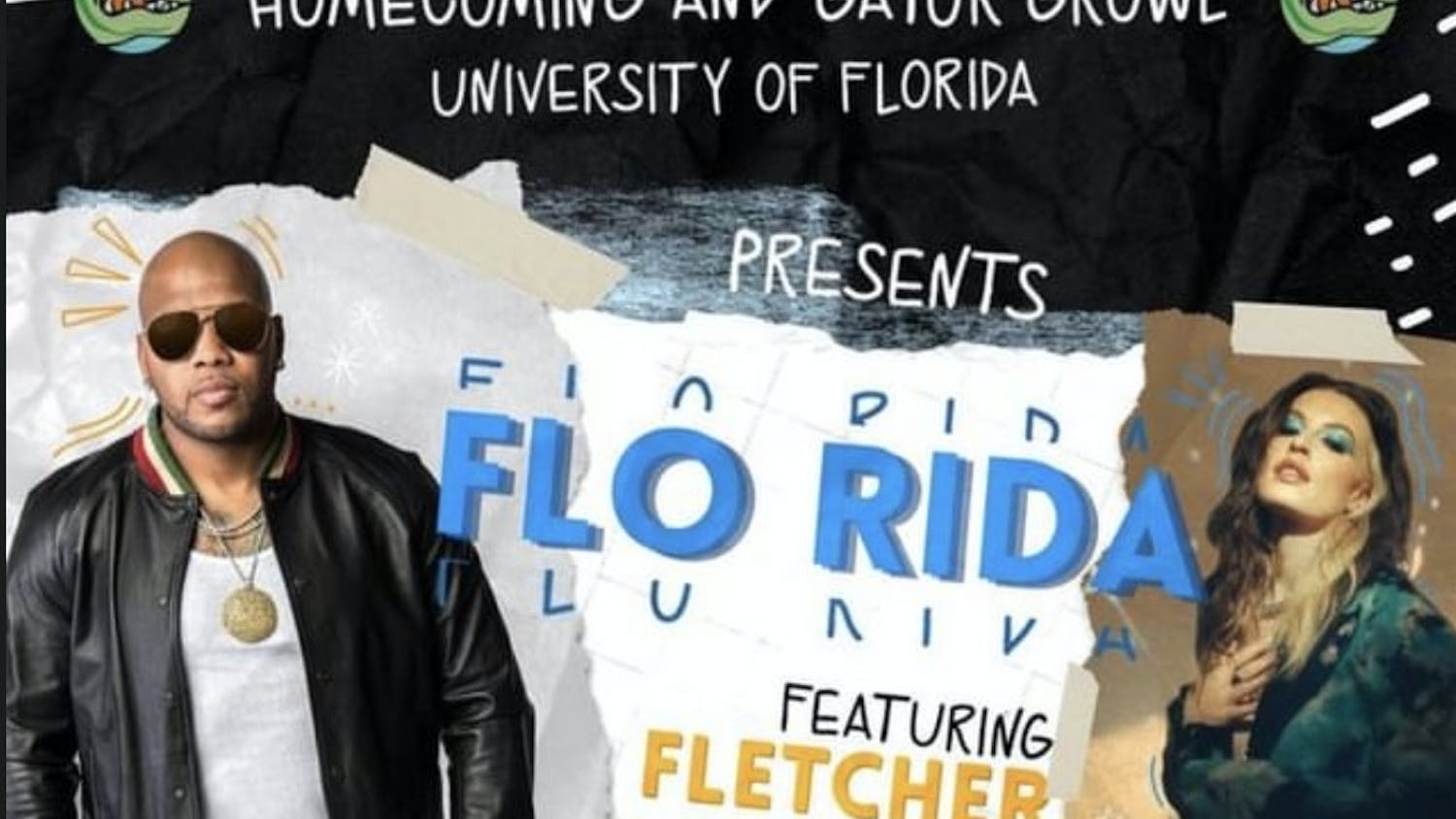