Mary Wise had a dilemma.

There was an open spot in her coaching ranks after her former volunteer assistant coach Skylar Lopas became Flagler College’s head coach, and she needed someone to replace him before the collegiate volleyball season began in the fall.

Wise thought back to a conversation she had in Atlanta, recruiting alongside Lopas at the Big South National Qualifier in April. As fate would have it, she encountered her former All-American libero Caroline Knop at the tournament, allowing the pair to catch up.

“CK” was the centerpiece of the Gators squad that made it to the national championship game in 2017, only to fall to Nebraska in four sets. She accumulated 976 digs in her Gators career, ranking 18th all-time in UF history.

After her time in Gainesville, Knop, then 22, joined the College of Charleston as an assistant coach, where she spent the past three seasons under the tutelage of head coach Jason Kepner.

“I was there recruiting for Charleston and we all just happened to be on the same court at one time,” Knop said. “I jokingly said to Mary, ‘pay me enough and I'll come back and be your volunteer.’”

It may have been just a joke at the time, but after Lopas took the Flagler job a week later, Wise knew who would take his place.

In late May, Knop got the call.

“I haven't been able to stop thinking about this,” Wise said to her. “You can tell me I'm crazy and to hang up right now. Would you potentially come back?”

While Knop, now 26, thoroughly enjoyed her time at Charleston, she knew she was ready for a change.

Knop, who initially encouraged Lopas to take the volunteer position when it became available in 2019, was named to the role July 25.

“For a grand total of zero dollars and zero cents,” Wise said.

Despite the volunteer tag, Knop said Wise has encouraged her to share every bit of advice she can and assured her she’s just as much of a coach as anyone on the staff.

Knop immediately went to work building relationships with her players, she said, trying to foster the same connection she enjoyed with her teammates during her two years at UF. With her playing career only a few years in the rearview mirror, Knop said she’s related more to the player’s perspective.

“I think I've been a voice of reason between the players and the coaching staff,” Knop said.

Knop was originally recruited out of La Salle College Prep in Pasadena, California, by the University of Michigan. After two seasons with the Wolverines, she transferred to Florida in 2016 for her last two years of eligibility. She wanted the chance to play under Wise and compete for a national title.

Carli Snyder, who now plays professionally in France, played with Knop during her two years at UF and on the U21 United States women’s national team. They saw the makings of a great coach early on.

“When I played next to CK my junior year, my passing numbers increased so drastically, but I wasn't doing anything different,” Snyder said. “I just felt more confident because of who I was passing next to.”

Snyder recalled playing alongside Knop during Florida’s Elite Eight matchup against Southern California in the 2017 NCAA Tournament. UF was down two sets to one and losing in the fourth set, when Knop pulled the team together following a timeout.

Knop’s passion and energy sparked a Gators comeback, allowing them to win the final two sets and advance to the Final Four. It’s the same endless desire to win Knop is trying to impart on her players as a coach.

Rhamat Alhassan, who plays professionally in Italy and was teammates with both Knop and Snyder, recalled Knop’s ability to work with children during UF’s annual summer volleyball camp.

“You can know what you're talking about but being able to put it in a way that other people understand it and then are able to go and execute it,” Alhassan said. “That's what being a good coach is and I saw that from her.”

The biggest adjustment to coaching was discovering how to use words to explain concepts rather than relying on demonstrations, Knop said. Although some of the players she’s coached are visual learners, Knop has developed her ability to teach verbally.

That’s not to say that Knop isn’t capable of hitting the hardwood and showing her players how it’s done.

There are two hallmarks of Knop’s game she exuded as a vocal leader on the court: confidence and effort. Those elements have become the focal point of her coaching career.

Three years after Knop’s departure from the Gators, a firecracker with the same competitive spirit emerged as UF’s next starting libero. Elli McKissock burst on the scene in 2020 and picked up where Knop left off. The 5-foot-7-inch junior has tallied more than 1,000 digs in her collegiate career and has made herself the anchor of the back row.

McKissock watched Knop sport the orange and blue as a high school player and calls playing for her a dream.

“Being able to be under her and striving to be anything like her is my goal in life,” McKissock said.

Knop pushes the team every single day while demanding effort and emphasizing the importance of team chemistry, McKissock said.

The intensity of playing has translated to her role on the sidelines, Knop said.

“​​I do get just as excited, if not more excited, on the sidelines for our young women,” Knop said. “I'm in practice each and every day with them and helping them work on new techniques and new skills and trying to better their game. When you see it actually happen on the court, that's pretty cool.”

Under Kepner at Charleston, Knop honed her communication skills and explored different styles of coaching. Kepner allowed her to tinker with his game plan, prepare defensive schemes and implement her ideas.

“He was very open about having me come in and be able to run a lot of things that I wanted to,” Knop said.

At UF, she has joined forces with a well-established staff including Wise and associate head coach Dave Boos — the duo that once coached her.

“CK has an incredibly high volleyball IQ and I think she and Dave are just a great tag team together,” Wise said.

Being around volleyball legend Wise has taught her the ins and outs of running a successful program, Knop said.

Coaching under one of the most successful female head coaches in Division I volleyball history is a different animal than playing for her, but it’s a task Knop has embraced.

“It's been a different relationship and a really great one,” Knop said. “It’s trust and knowing that I'm a peer to her now. I am in the same room with her and having the same conversations and adding my voice when I can.”

Knop has aspirations to one day become the head coach of a Division I school, she said. But for now, she’s happy being home.

No. 15 Gators outlast LSU in 5 sets to secure weekend sweep 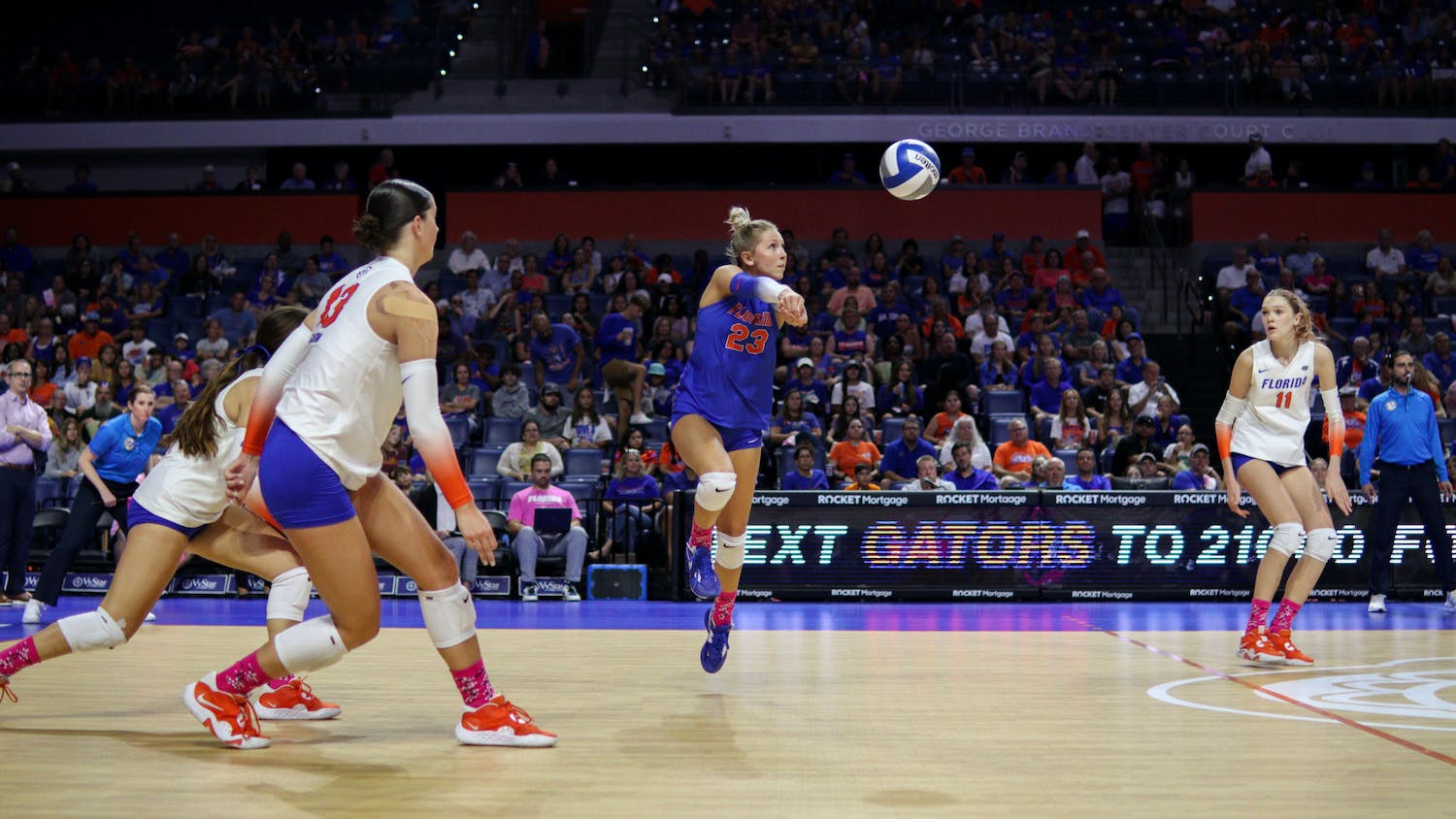