A big change is coming to the Gators, and it is coming in a big package.

“He’s in line to play quite a bit,” offensive coordinator Brent Pease said.

Brown stood out from the other linemen during fall camp due to his size, but he had trouble blocking quick defenders like Dante Fowler Jr. and Ronald Powell. Despite Brown’s struggles, Pease said practicing against top-notch players made the JUCO transfer a better lineman.

“What I’ve found out is every day you’re going against great guys in what we have in Dante and (Jon) Bullard and the guys we see on the edge,” Pease said. “So you get good practice reps, and you’ve got to … have intensity.”

Rivals.com rated Brown a three-star prospect, but his experience on the line quickly vaulted him up the depth chart. He was listed as the backup right tackle for each game this season.

While Brown took second-team reps, the offensive line struggled. Quarterback Tyler Murphy has been sacked 10 times in the past two games, including six times by Mizzou defenders in Florida’s last game.

Murphy suffered a shoulder sprain against LSU but played through the injury against Missouri. He sat out the last week of practice so he could rest the injured shoulder and is expected to start against Georgia (4-3, 3-2 SEC).

Murphy will not last long if his offensive line cannot protect him.

Coach Will Muschamp and his staff have spent the past week trying to sort out who will play on the line. Pease said on Tuesday that they have narrowed it down to “eight to nine guys.”

Florida (4-3, 3-2 SEC) hopes Brown can ease their woes at tackle, as both Moore and sophomore D.J. Humphries have struggled to stack up against SEC defensive ends.

Humphries was picked on twice for sacks to end UF’s last offensive drive against LSU, and Moore surrendered multiple sacks when he lined up against Missouri’s Michael Sam.

“We had too many negative plays,” Pease said. “It’s hard for them. It’s hard because they get matchups.

“You’ve got to do a good job of winning against the very good players, and you’re not going to win them all. So it’s just kind of the consistency of playing against, playing with a very good opponent in that position.”

The Gators have tried another transfer, lineman Max Garcia, at tackle but have received mixed results. Garcia has primarily played left guard at Florida.

“(I’m) not as comfortable as I am at left guard,” Garcia said of playing at tackle. “I have practiced left guard since the spring.”

Pease said Garcia was having trouble adjusting to the wider gaps tackles need to defend, but he was generally pleased with how the redshirt junior has played this year. He said Garcia was one of three linemen he was happy with — right guard Jon Halapio and center Jon Harrison were the others.

With UF struggling to move the ball, Pease has tried to simplify the offense in order to get it moving faster — changing protection schemes and focusing on what the Gators do well.

Garcia said the offense is trying to go back to simpler game plans the team has gotten away from.

Changing an offense halfway through the season is a desperate move for a team in a desperate position — one win over .500 and one loss away from having any chance at an SEC title be eliminated.

“It could be the problem for the whole offense,” wide receiver Trey Burton said.

“We’ll find out this week how well we react to it and adjust to it.”

Max Garcia (76) lunges for a Missouri defender as redshirt junior quarterback Tyler Murphy (3) attempts a pass during Florida’s 36-17 loss to Missouri on Oct. 19 at Faurot Field in Columbia, Mo. UF’s line has allowed 10 sacks in the past two games. 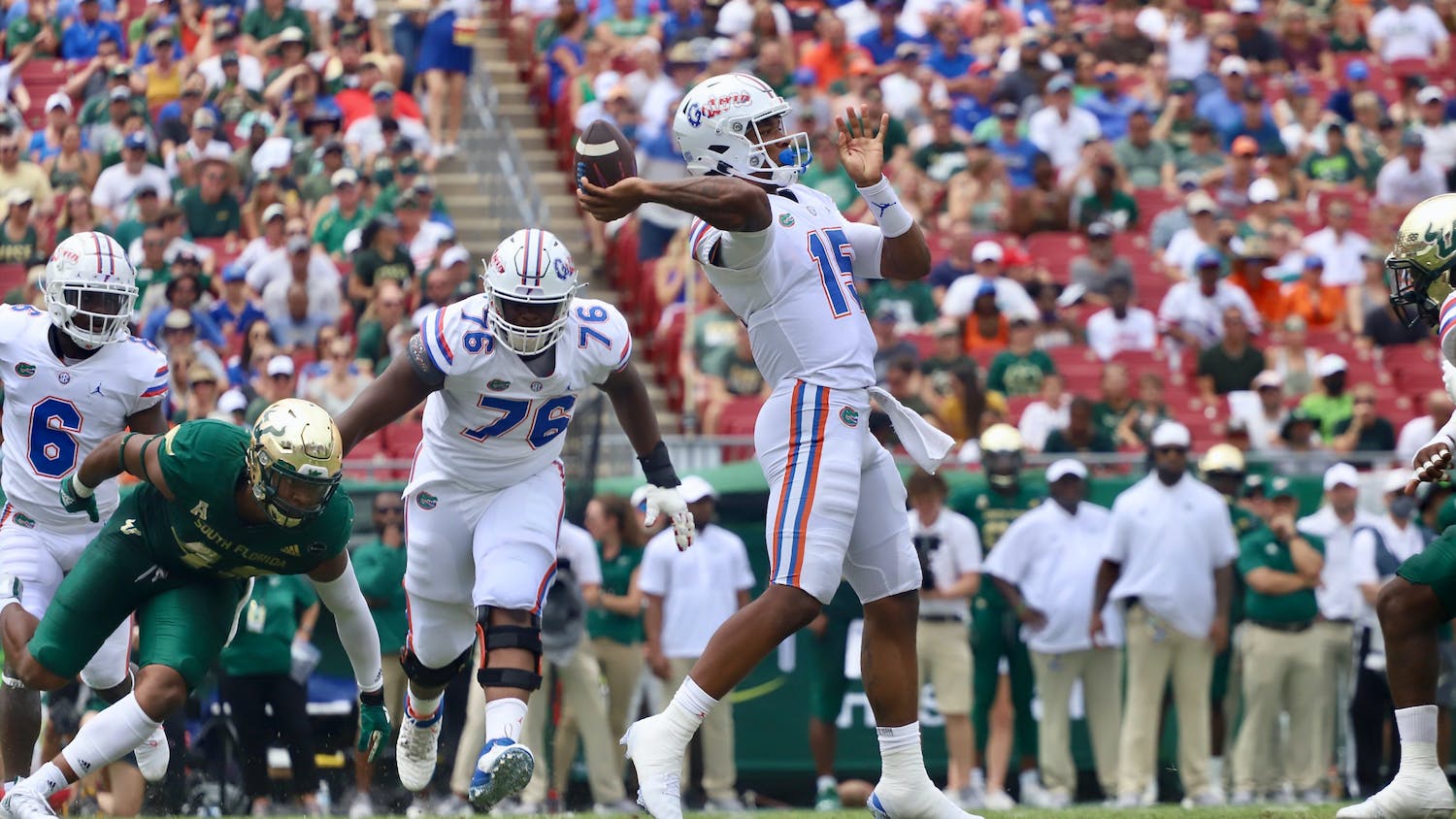 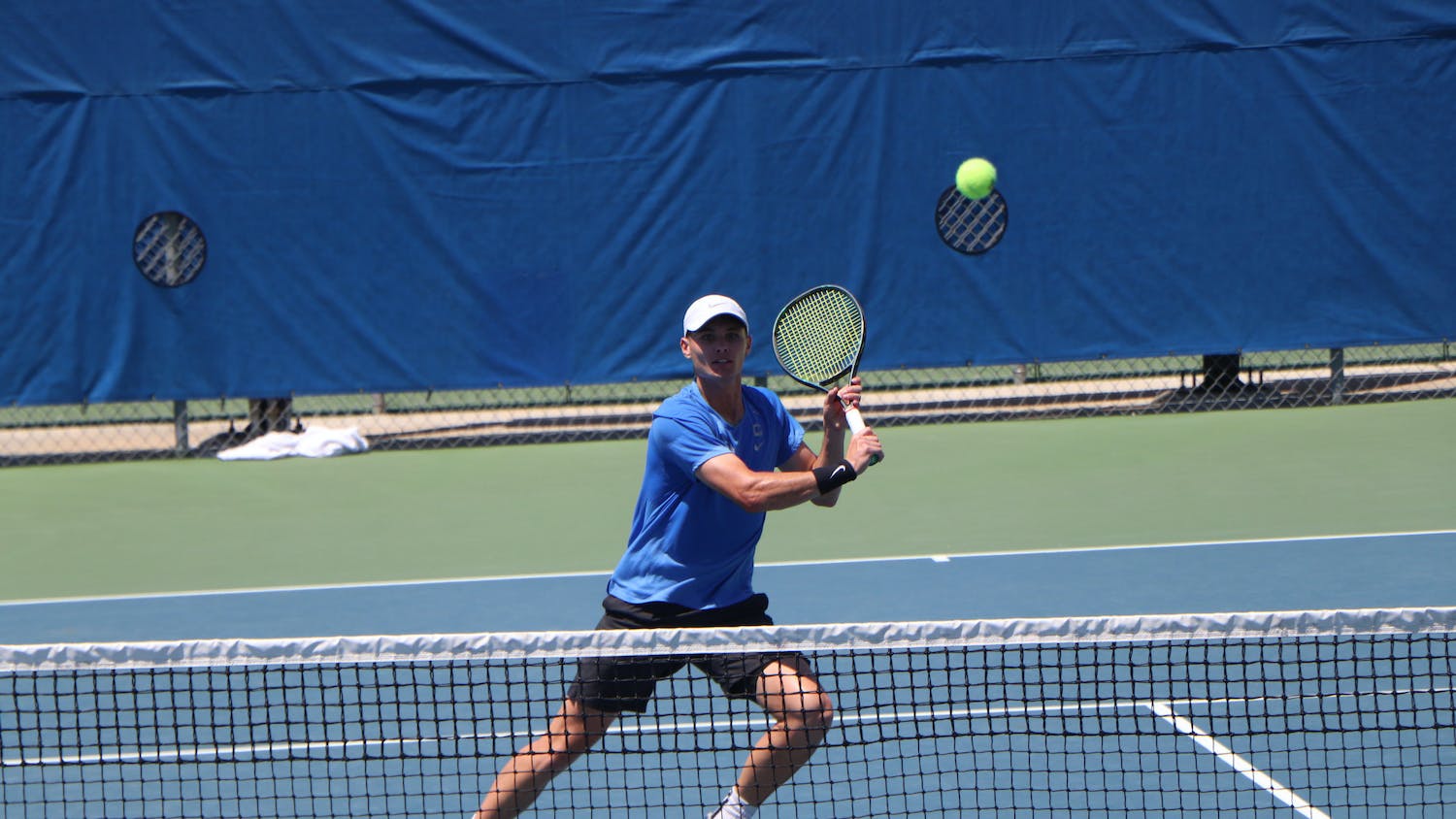