At medieval fair, thousands traverse U.S. to travel back in time

For 38 years, Susan Griffin has made a living painting faces.

Her most reliable customers typically request to be transformed into unicorns. But anything purple, pink and mythical will do.

This weekend and next, the 64-year-old Houston, Texas, resident will transform hundreds of faces at the 31st annual Hoggetowne Medieval Faire.

More than 1,000 vendors, entertainers and volunteers from across the country will be there, including Griffin, who traveled from Texas to Gainesville in an RV.

“This show has a wonderful following,” Griffin said. “When we come here, it’s worth our time.”

Last year, over the course of five days, about 60,000 people visited Hoggetowne at the Alachua County Fairgrounds. The number of attendees should be about the same this year, said Karen Baker, an assistant event coordinator.

Over the past 24 years, Griffin has painted faces exclusively at Renaissance fairs. Hoggetowne, a bustling medieval village in Gainesville set hundreds of years before the Renaissance period, is the only exception.

In her prime, Griffin went to eight shows a year. Now, at 64, and with a bad left knee to boot, she’s dialing it back.

Like Griffin, many vendors don’t live in the area, but they make the yearly haul to Hoggetowne for a reason.

This year, alongside her RV-dwelling cats, Hannah and Herman, Griffin will drive her 34-foot motor home to four other fairs in the U.S.

“That’s enough to keep me off the streets and out of the martini bars long enough,” she said, laughing.

In the days prior to the fair, Griffin will catch up with friends, old and new, but when the gates finally open, all of her time will be devoted to her customers.

Griffin said she won’t ever abandon her booth during the event — even to watch a nearby joust or medieval duel.

“How much would you like to spend?” Griffin asked. “I can accommodate whatever your fantasies are.”

On a live-action chessboard, in a field carefully spray-painted with squares, Sara Greenberg can be found defeating her partner, Chris Rodd-Layedra.

With sword in hand, Greenberg, a 22-year-old UF alumna, will fight — and defeat — Rodd-Layedra five times: once a day for the duration of the fair.

This will be her fourth time and Rodd-Layedra’s third performing at the fair. Both are members of local acting troupe The Thieves Guilde, a group that re-enacts battles from the medieval and Renaissance periods.

Greenberg joined the troupe during her sophomore year at UF after hearing about it at an informational booth. For Rodd-Layedra, 24, a radio advertisement was all it took to get hooked on swords, daggers and choreographed battles.

The pair auditioned for their roles in the fall and have practiced dueling at the local YMCA every Saturday and Sunday since.

Chris Rodd-Layedra, 24, and Sara Greenberg, 22, pose for a picture on Wednesday. They're partners for a fighting performance at the Hoggetowne Medieval Faire on Jan. 28, Jan. 29 and Feb. 3 through  Feb. 5.

“I don’t think I’ve hit you,” she said, looking toward her companion. “I’ve hit other partners unintentionally. I think virtually everyone who has done this for quite a while has had some horror story.”

For Rodd-Layedra, the only consequence waiting for him is a dirty costume.

Sharon Crystal has dressed almost everyone at Hoggetowne in one way or another.

Crystal’s interest in medieval garb started 57 years ago at the Original Renaissance Pleasure Faire in California, her home state.

Since then, Crystal’s job has been to sell historically inspired clothing, which she personally designs and creates, at nearly every Renaissance fair in the country.

“A lot of us have made a business of this,” she said of the Renaissance fair circuit, which she compared to a small nation of immigrants. “My god, what a beautiful life.”

This year, Crystal will travel to 17 fairs to sell her custom designs, which are priced between $75 and $750.

The most popular garments bought in Crystal’s tent are lace-up corsets.

Those who purchase them also receive a complimentary lesson on how to put them on — or their husbands do.

“It’s been a long road, but it’s the most beautiful career you could have,” she said.

Like many vendors, Hoggetowne will be the first stop on Bryan and Mary Nowland’s Renaissance circuit.

For five consecutive years, Mr. and Mrs. Nowland have driven 18 hours from Michigan to sell cheese ball and dip mixes and custom-made toe rings at the medieval fair.

Mr. Nowland is in charge of the jewelry. Mrs. Nowland presides over the cheese.

“We stopped working our real jobs and decided to do something different,” Mr. Nowland, 59, said.

The couple started selling their diverse selection of goods at farmer’s markets but found that events with admission costs were more lucrative.

“The biggest draw for me is the personalities of the people,” Mr. Nowland said. “Even the new crew has become our friends in a couple of days.” 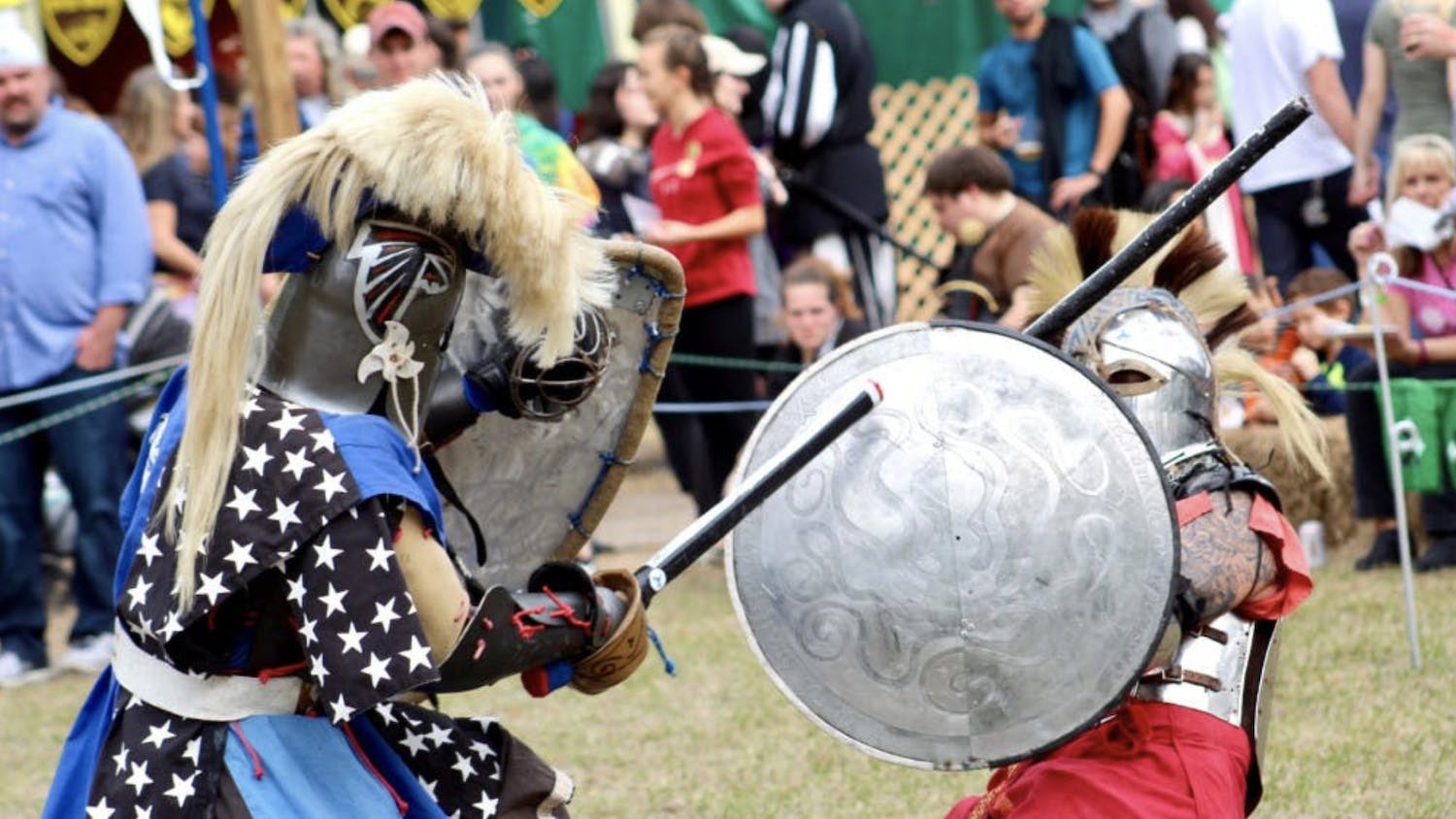