‘We made it possible’: UF’s first black performer still singing

Standing in front of a nearly all-white crowd at UF’s Florida Field, a 15-year-old black boy belted out a song of exaltation.

On any other day, the soul-singing prodigy known as Little Jake Mitchell — backed by a band of his friends from Gainesville’s all-black Lincoln High School — would have been barred entry from the then all-white university.

UF was still two years away from admitting black undergraduate students for the first time. Its first black student, who enrolled at the College of Law in 1958, had just left after three trimesters, citing the struggle of carrying the weight of history on his back.

But on this day, Mitchell broke through the barrier. He became UF’s first black entertainer. More, he was headlining.

And he had demands: His people should be allowed to hear him play.

In a way, Mitchell, now 72, says he opened the door for integration at UF and for other black musicians and entertainers to perform at its many venues.

He considers it an entry fee.

“We made it possible — I always will say this — we made it possible for blacks to be able to go to the University of Florida in a sense,” he said. “Because music was a thing that brought peoples together. And they was crazy about our music.”

On Saturday he’ll take the stage again, this time at Soulfest. He and his band, The Soul Searchers, go on at about 4 p.m. at First Magnitude Brewing Company.

Rehearsing for the concert in a cramped room in downtown Gainesville on Feb. 9, it’s clear he hasn’t lost his groove, as he swaggers to his spot, easing into falsetto from baritone while a blend of horns, guitars, percussion and an organ guide him into the night.

Mitchell’s rise to fame stemmed from a stroke of luck at a poultry market in Tampa.

He was about 12 years old, and — as can be said at almost any point in his life — he was singing.

Singing so loudly that the market’s owner, on the phone with a manager at the time, could hear him in the background.

“Who is that singing?” asked Henry Urso, the owner of Sweetwater Poultry Market.

“You hold him there until I get there,” Urso ordered.

Urso took the young singer, who grew up in a project housing unit, under his wing, acting as his manager.

He put Mitchell on a plane to Chicago later that year, hoping some connections he had with Chess Records would help Mitchell make a career of his talent.

It panned out, with Mitchell signing a 10-year contract, singing on a master tape with Chuck Berry and going on tour soon after.

Although the deal would turn sour following a contract dispute, Mitchell toured with a Tampa-based group on the “chitlin circuit,” a nickname given to tours centered on predominantly black clubs, called “juke joints.”

Still in school, Mitchell toured with the group, The Skyliners, two months a year from 1957 to 1959.

“I was a drawing card for them. I was a young boy, 12 years old. And they thought I was fantastic,” he said.

Originally born Arnold Rodriguez, Mitchell earned the name Jake from his aunt and his last name after his mother remarried.

Soon enough, he moved to Gainesville and enrolled at the now-closed Lincoln High School. After the Brown v. Board of Education ruling, many Florida politicians insisted on segregation, but Mitchell’s music broke through the racism.

At UF’s Fraternity and Sorority Row, he was a celebrity, playing four-hour concerts every weekend for two years straight.

The university quickly took notice, and Florida Blue Key invited him to perform in 1960 for an all-white audience.

He bargained with then-UF President J. Wayne Reitz and Florida Blue Key, which organized Gator Growl, to open the gates.

They caved. Ten thousand bleacher seats were set aside for blacks. From center stage, Mitchell could see them filing in, separated from whites.

Minutes into the performance, however, the crowd’s color began to blur as whites and blacks danced along to the sound of Mitchell’s band, The Blenders.

Steadham, who now plays saxophone in Mitchell’s band, said musicians are typically “10 years ahead of politicians” in terms of social change.

“It was a time of change and a time of evolution,” he said. “The wonderful thing to me, you know, is realizing that music helped lead the way.”

It wasn’t until 2011, when both Steadham and Mitchell were out of retirement and met at a jam session in Gainesville, that they decided to link up.

As he readied his sax to begin rehearsal Feb. 9, Steadham clipped on dark lenses to his glasses. The diminished sense of sight, he said, enhances his other senses, including his hearing.

In a way, Mitchell removed color from the picture when he performed at UF.

“When you take part of your visual sense away, you sharpen your other senses,” Steadham said. “All we saw was the music and camaraderie and mutual support. Over time, people fell in line behind that.”

Little Jake Mitchell, a singer who became UF’s first black Gator Growl performer in 1961, rehearses with his band on Feb. 9 ahead of the Soulfest concert.

Little Jake Mitchell, 72, rehearses with his band, The Soul Searchers, on Feb. 9 in downtown Gainesville. Mitchell, who began singing when he was 5 years old, credits his historic 1961 Gator Growl performance as a catalyst to integration at UF. 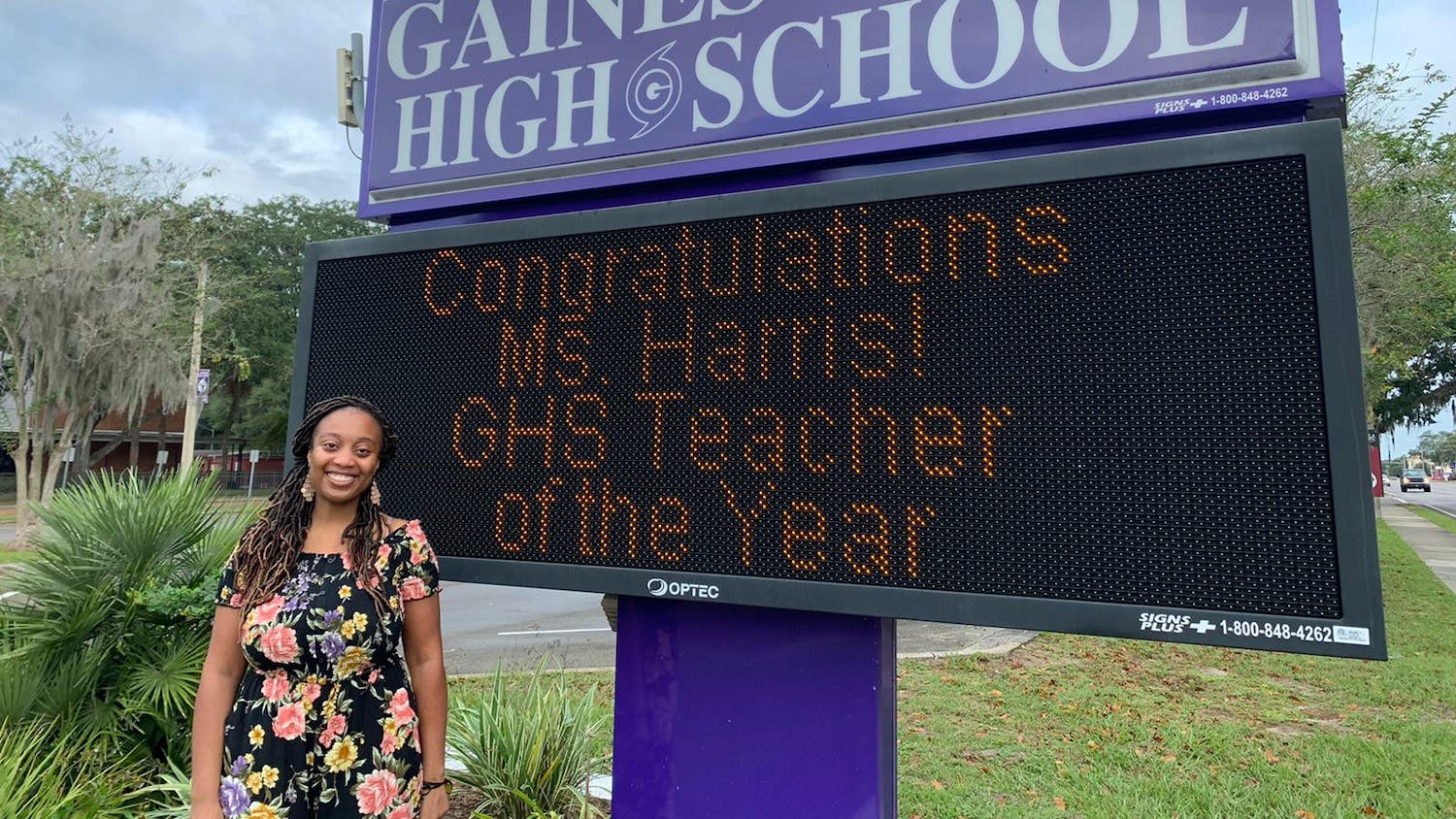