The “Diners, Drive-Ins and Dives” star is the fifth Accent speaker this Spring

On Thursday night, UF students had all their cooking, spice and food coma questions answered by the one and only Mayor of Flavortown.

Fieri won a Daytime Emmy Award in 2013 for his show “Guy Fieri’s Family Reunion.” He is also known for his other Food Network shows including the popular long-running series “Diners, Drive‑Ins and Dives.”

This was the third day of Accent events this semester. On Feb 3, the organization hosted YouTube stars Cody Ko, Noel Miller and David Dobrik in a $120,000 show, and Tiffany Haddish and Tabbitha Brown March 24. Accent paid Haddish $75,000 and Brown $35,000 for their appearances.

The event was announced on Accent’s Facebook page Wednesday morning, less than 48 hours before the show. Nearly 300 students attended the event, according to Accent Chair Steven Wolf. He did not answer questions about why it was announced last-minute nor the potential decrease in turnout because of the delayed announcement.

Wolf also did not answer questions regarding how much money Fieri was paid. The Alligator submitted public records requests for Fieri’s contract.

The show consisted of a 45-minute conversation moderated by UF’s Department of Journalism Chair Ted Spiker followed by a 15-minute Q&A session.

Spiker asked Fieri about the COVID-19 pandemic, his relationship with food and the critical New York Times review his restaurant received in 2012.

Fieri, who is known for traveling across the country and trying all different types of foods, revealed the one food he won’t eat: beef liver.

"You could hide the keys to a new Ferrari under a plate of beef liver, and you wouldn't have to worry about me driving it," he said.

With more than 100,000 restaurants closed last year due to the pandemic, owners and workers felt a huge financial impact. Seeing so many restaurants shut down, Fieri set a personal goal to raise $100 million to help, he said.

Although he fell short of this goal, Fieri was able to raise more than $20 million and helped more than 43,000 unemployed restaurant workers with a $500 grant per worker. Fieri garnered support from major sponsors, such as Pepsi and UberEats.

“No, I didn't hit my $100 million. And no, I didn't get everybody money,” Fieri said. “But what we did do is we set an example that we could make an impact.”

Fieri also talked about his time and eating habits as a college student at University of Nevada in Las Vegas. He advised students in college to learn how to cook as early as they can.

“It is a life skill you need to know,” he said. “All of the stuff you put in your body has an end result on what it does to it.”

Cooking can save people, Fieri said. With the money someone would spend on a cheap fast food burger, they could buy brown rice, vegetables and a nice steak, and make themselves a week’s worth of diversified meals, he said.

Spiker asked about the 2012 New York Times review criticizing the food and service in Fieri’s Times Square restaurant that had been recently opened. Fieri said even though he doesn’t agree with 100% of what it said, he learned from it.

“It is not what happens to you. It is how you choose to handle it," Fieri said.

During the Q&A, a student asked for a piece of advice he would like to give his younger self.

"Keep doing what you're doing, you know. Live the way you've been living," he said. “Take the bumps, take the bruises, take the cuts and the scratches and smell the roses.”

Kawali Gokool, a 21-year-old master student of marketing, asked Fieri to give UF his most high-energy welcome to Flavortown.

While Fieri didn’t do it right away, he promised he would before the end of the conversation. And he kept his word.

As Spiker concluded the show, Fieri bid farewell by giving a final send-off: "My brothers and sisters of Flavortown: You rock, Gators!" he shouted.

J.P. Oprison contributed to this report. 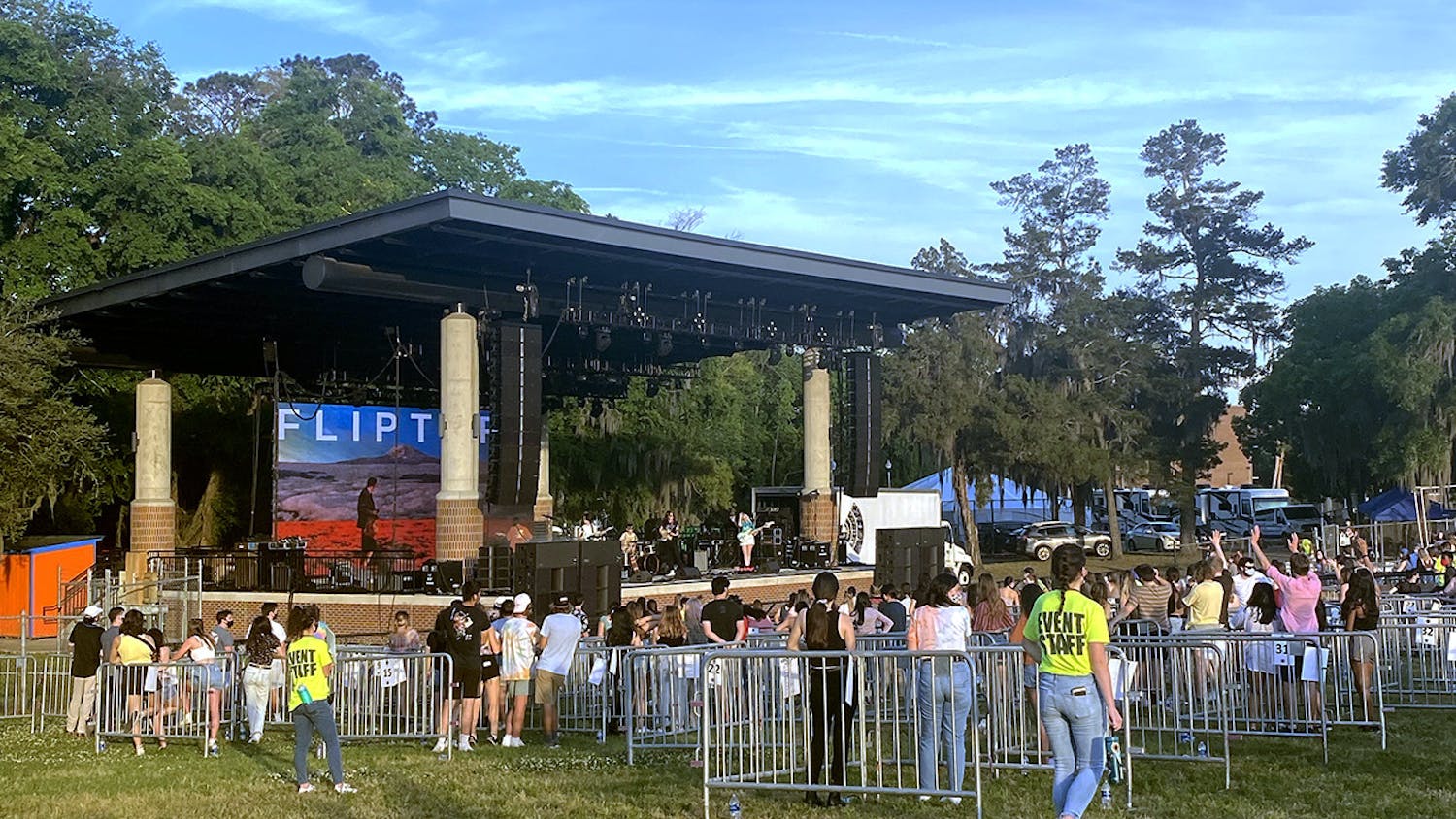