At the end of the event, SGP announced Gunna and Neon Trees as the future performers for Homecoming and Gator Growl

When the hip-hop boy band BROCKHAMPTON took the stage at the O’Connell Center at 8:15 p.m. and started their concert with “BUZZCUT,” students with floor seats ditched their chairs and formed a large crowd in front of the stage.

Mostly maskless students stood shoulder-to-shoulder and glowed in bright roaming lights as a band member encouraged the crowd to clap with the Gator chomp.

“I need y’all to do that thing with your hands,” he said onstage, and the audience obliged.

Their Aug. 23 performance had a crowd of about 6,000 UF students who erupted in cheers as they took the stage. Upon entry, students passed through metal detectors, showed staff their mobile tickets and gave their student IDs to swipe and check their “cleared for campus” status.

The event also sold exclusive long sleeved shirts that sold out before the show. Students were outraged on the subreddit r/brockhampton, claiming one student had purchased two bags full of merchandise.

Aaron Blanco, a 20-year-old UF philosophy junior, arrived at the O’Dome at 5 p.m., when gates opened at 6 p.m., to make sure he and his friends could get merch. Toward the front of the long line, Blanco noticed a student purchase two full bags of the shirt. This student left nothing to buy for the rest of the line.

“We were all pretty bummed, especially since that guy is going to just turn around and sell them for triple the price online,” he messaged.

One reddit user, u/awokenloporlp, potentially identified himself as the person who purchased the two bags of merch, posting a now-deleted comment, “gotta make a bag somehow.” Kevin Abstract posted the interaction in a tweet he later deleted.

Following UF’s protocols of expecting, but not requiring, masks and no additional COVID-19 safety measures in place for the concert, the audience was nearly completely maskless. Nearly all seats in available sections were filled.

The show was hosted by Student Government Productions, a SG agency funded by student fees that pays entertainers to perform at UF. SGP operates on a fiscal budget of $800,000 and received an additional $750,000 to host events for students following a reserve fund transfer of $1.55 million proposed by the executive branch to enhance the student experience.

SGP’s first event of the semester featured seven members of the hip-hop boy band BROCKHAMPTON and lof-fi pop/rock singer Deb Never — the artists were paid $250,000 and $15,000 respectively for their performances.

A previous SGP event featured Mt. Joy and flipturn, who were paid $62,000 and $10,000 respectively, in a Spring socially distanced pod concert.

Deb Never kicked off the first day of Fall concert at about 7 p.m., dazzling the audience with a rock-take on her lo-fi records.

“A concert on the first day of school,” she said onstage. “That’s dope!”

Keyursingh Rajput, a 26-year-old UF mechanical engineering master’s student, said although he had never heard of Deb Never before, he would listen to more of her music in the future and gave the concert a 10 out of 10 ranking.

“There was so much energy,” he said. “There was a rush of adrenaline.”

BROCKHAMPTON rapped songs off their new album “ROADRUNNER: NEW LIGHT, NEW MACHINE,” which debuted in April, along with some classics such as “SUGAR,” “GOLD,” and “BLEACH.” The crowd echoed back the lyrics of “GOLD” as Kevin Abstract held his microphone out to the audience.

“You guys have been such a great crowd,” BROCKHAMPTON member Matt Champion said to the audience halfway through their performance.

The free tickets, which were only available when obtained in person, ran out the day of the concert. Ticket distribution maxed out at 6,000, according to SGP Chair Jake Siegel.

The line to receive tickets Aug. 16 grew to about 200 people, according to UF student Austin Cerber, who got in line slightly an hour before ticket distribution began at noon and he left around 12:30 p.m.

“I think this was the right audience and the right time — everybody wants to see a free concert,” Cerber, a 20-year-old UF finance junior said. “Everybody wants to, quote unquote, go back to normal and see something live again.”

Cerber said he first heard and became a fan of BROCKHAMPTON in 2017 when their album “SATURATION III” was released. Their alternative, experimental hip-hop sound jived with his taste in music.

“No matter what you're a fan of, I think they make a lot of good music for a lot of different audiences,” he said.

Megan Ramon, a 19-year-old UF English junior, got her tickets the day of the concert since she hadn’t heard of the event until Monday.

“When I found out that they were singing, I immediately texted my boyfriend, because my boyfriend’s a huge fan too, and I was like ‘Guess who’s playing at my school?’ and he was like ‘No way.’”

SGP announced with flyers and signs at the end of the concert that Gunna and Neon Trees will headline Homecoming and Gator Growl Oct. 8. The concert will also take place at the O’Connell Center with doors opening at 5 p.m. 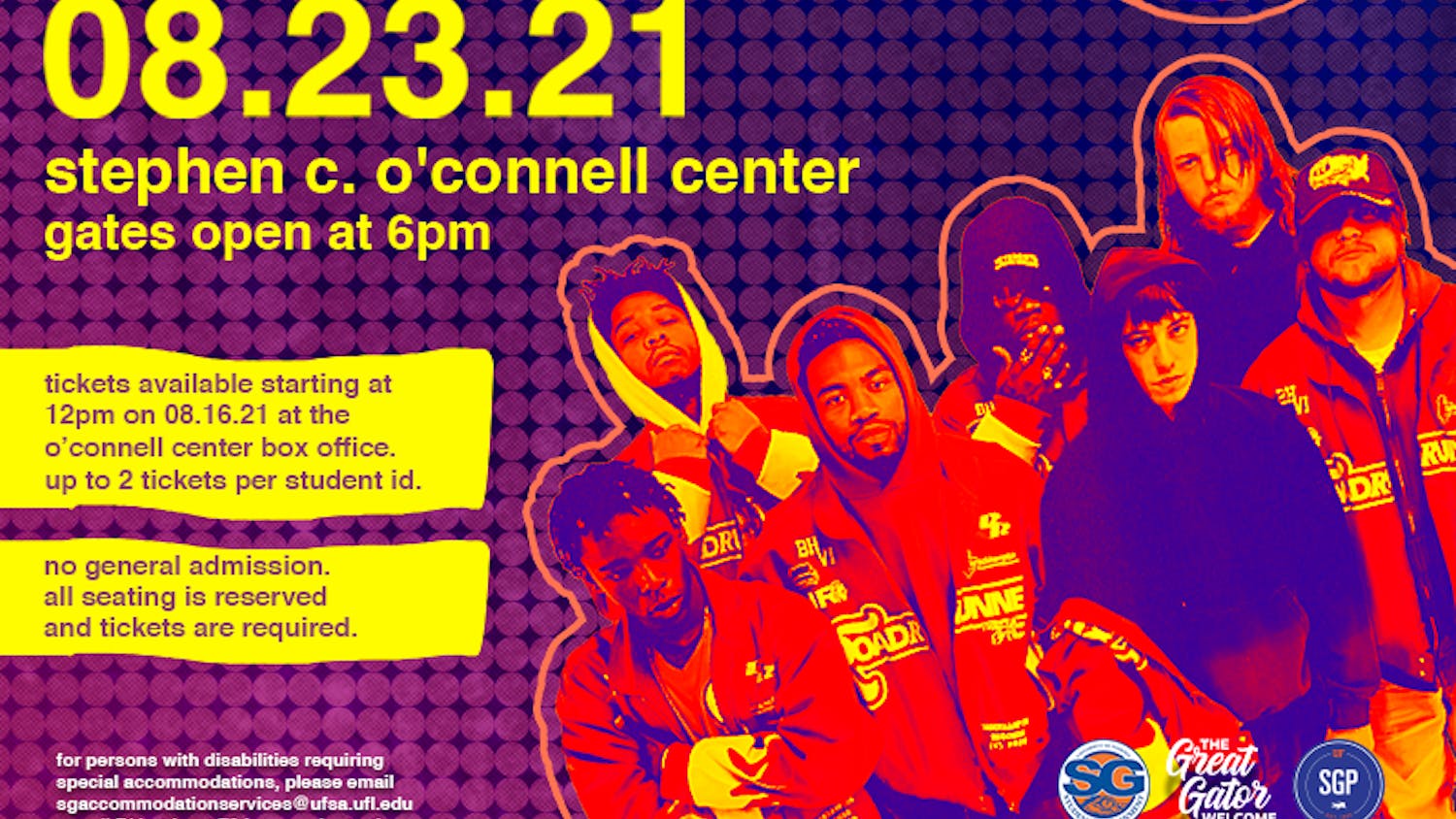