The latest rendition of Florida-Georgia is set to kickoff Saturday in Jacksonville, so I sat down with Stuart Steele of The Red and Black, the Georgia student newspaper, to preview the rivalry game and get the rundown on the top-ranked Bulldogs.

This Georgia team has been far and away the best team in the country. Specifically, the defense has been historic. What is the defensive unit’s strongest area and does it have a weakness? If so, what?

Steele: So to me, this defense starts with the front seven and the depth up there, because it's two deep at every position, sometimes three, I mean, interior D line I think, is just unbelievable with Devonte Wyatt, Jordan Davis and Jalen Carter, who have all looked incredible this season. I think that's where it starts, and that rotation and keeping guys fresh up front has allowed them to just play with a lot of speed. Teams try to throw like these outside screens and stuff thinking that they can get it to their athletes. And it's just like, you're not faster than the Nakobe Dean out there. He's gonna get out there. He's gonna make the tackle.

If there's a weakness, and I wouldn't call it a weakness, but it's something that could be exposed against a good team, it's the secondary. I mean, it's an inexperienced group, outside of the safeties (who) are pretty experienced, but Kelee Ringo is a guy who has played well this season but I think could be tested in the right situation and give up some big plays.

But part of that goes back to that front seven, I think it’s covered up for some of the potential issues that we have in the back end. When you're getting pressure on the quarterback immediately, it hardly even matters if your corners are covering well or not.

Jordan Davis has been an absolute game-wrecker at defensive tackle. What about his game is so impressive and what impact will he have Saturday?

Steele: I mean, honestly, everything about Jordan Davis is impressive. Watching him all season long, he has some plays where he's chasing down a quarterback or running back like 10 yards down the field, and you would never expect that from someone who's 6’6, 340. The athleticism is there. The strength is there. He's a great leader. He's vocal. He's good character. I mean, I don't see anything not to love about Jordan Davis as a football player, and he's the heart of the defense.

I agree. I don't think he's a realistic Heisman candidate. I think people want somebody from this Georgia defense to be a candidate, but it's really about the unit as a whole. It's not one player. His numbers don't scream Heisman. If he had a few forced fumbles, pick sixes, if Jordan Davis could pull that off, maybe, but it's really a group effort with him and all those guys up front.

While the defense has received its deserved praise, this offense has also been great. What is the strongest part of the Bulldog offensive attack, and how do you think they’ll fare against Florida’s defense?

Steele: So to me, the biggest strength of this Georgia offense is the tight end position. I think Brock Bowers has looked like a seasoned veteran and in freshman year; he's been explosive. He's made plays every week, and then Darnell Washington, who's been hurt this season for a lot of it, to me was coming into the year my pick for a breakout player, because his size and his athleticism is just off the charts. He had a play against Auburn a couple weeks ago, where he was just lined up single coverage on a corner out on the left, and they threw it up to him. He almost came down with it with one hand. He's just an outrageous athlete, and I think that's going to cause problems because when you have both of those guys run it in the middle of the field it's just a really tough task for the defense.

Stetson Bennett IV has taken a massive step forward this season. What have you seen from him so far this year? What’s the strongest part of his game?

Steele: I think the strongest part of Stetson Bennett's game is that he's got experience and that he knows how to make the right decision. He's not gonna kill you anymore. Last year, the Bama and Florida games, it was a ton of picks, a ton of missed throws, bad decisions, and I haven't seen that as much this year. There was one really bad pick against South Carolina where he just overshot his receiver, but overall, he's been really solid.

I don't know if I think he's really improved a lot outside of that. I think he's the same player. He's not gonna kill you with the deep ball too much; he can throw it, but I wouldn't be too concerned about that. I think what has improved around him is just the personnel around him is better, and they've got a better feel for this offense, this Todd Monken offense. Guys like Ladd McConkey and Adonai Mitchell have stepped up. The running game has been strong, the offensive line, which was a bit of a question mark for Georgia coming into the year compared to usual, has been really strong. It's just a really talented group. Again, it goes back to that depth. Receivers like (George) Pickens have been injured, Jermaine Burton, Marcus Rosemy-Jacksaint, we've had four or five receivers that have been out of the lineup, and Ladd McConkey and Adonai Mitchell have stepped in. They've played multiple positions, and they've looked like they know what's going on. So, yeah, I think it's just down to the personnel around Stetson.

Speaking of Bennett, Kirby Smart has talked about playing both him and JT Daniels this week. How do you think the quarterback situation will shake out Saturday?

Steele: So my gut says that JT Daniels could start this week. Kirby's not given anything that's gonna really indicate it, you know, he's like, “We’ll dictate it based off who's practicing better” and everything like that, so who knows?

I mean, going off how Kirby usually plays these injuries, it would be Stetson, because normally it's like he says, somebody's back and then they slowly get eased back in, but maybe because it’s the quarterback position, I could see Daniels getting back in.

I think the bottom line is to win a national championship game, it's gonna have to be JT Daniels, in my opinion, because I think you need some of that special quality that he has the throws he can make, third downs. I think just if you're playing a Bama in the national title game or whoever is in there, it's going to need to be Daniels and not Bennett. And that's not any indictment of Stetson Bennett, who's done an outstanding job this year of keeping the ship afloat while Daniels is out. But I just think he's not as talented. Like bottom line.

This is the most complete Georgia team we’ve seen in years. Is this finally the year the Bulldogs get over the hump? What, if anything, do you think could prevent them from reaching the national title game?

Steele: So as someone who's watched Georgia for my entire life, I will never say that any year is the year because I've learned too many times that college football is a crazy sport. Anything can happen. And I mean, it seems like whenever something can go wrong for Georgia or any Georgia sports team, it will go wrong. So, I think purely from an analyst perspective, I would say it should be the year. I think it's clear that Georgia is the best team in the nation by a margin. Like I think it's a down year for that second tier of teams, and I think it's a clear cut No. 1 like Alabama has been some other years because Bama hasn't looked as strong as we've gotten used to them being right, and Ohio State has some questions and Oklahoma's defense is terrible still. So, I wouldn't say that I'm expecting Georgia not to do it, but I'm keeping it in perspective because I just know how this works at this point.

Who is one X-Factor that could be the difference in the outcome of Saturday?

Steele: I'm gonna go to James Cook, who has been really good this season out of the backfield as a receiver. Obviously, he's been around a few years, so I don't think he's new to Florida fans necessarily, but he's got big play ability, his route running is awesome, if you match them up with a linebacker, he's gonna win that matchup, nine out of 10 times. I think he'll make a couple explosive plays. Another guy, going back to Ladd McConkey, it's weird because he doesn't strike you as somebody who's a great athlete necessarily, you know, it's the stereotype of the scrappy lunch pail, gym rat guy, but his route-running, his ability to learn this offense and he has some surprising speed. He beat Auburn for a 60-yard bomb. I think Ladd McConkey will make a couple plays in this game, probably score a touchdown.

Steele: I believe Georgia is gonna win this game. I think they're just too talented. I probably won't be picking Georgia to lose at any point in the season unless something changes. I think I got it about 31 to 10. I think Florida will do some good things early… Georgia is usually not blowing anybody out at halftime this year. I'd say, like, 17 to 7 at the half, and Georgia pulls away. 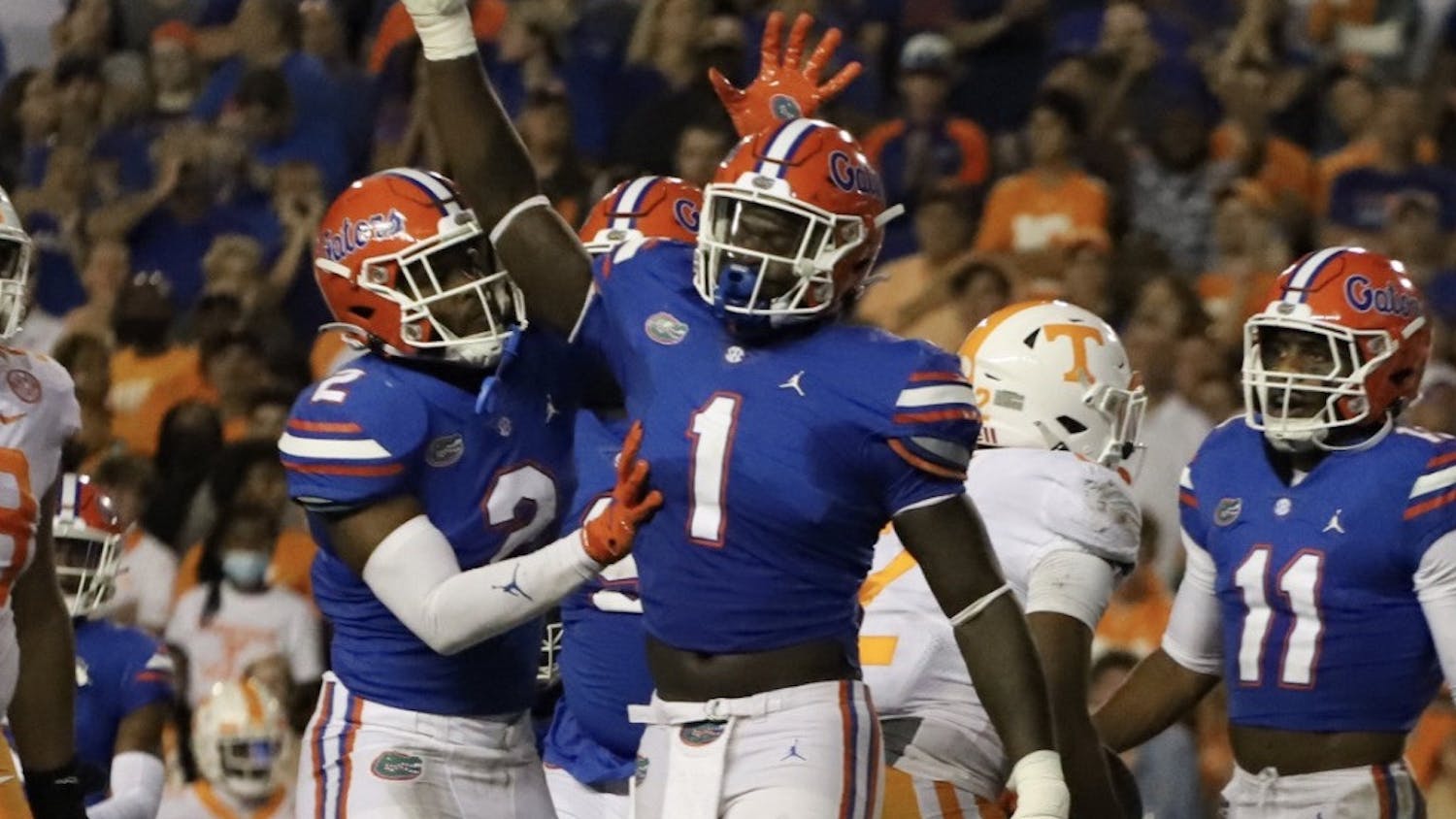 Times have changed: Unranked Florida prepares for No. 1 Georgia