Registered Gainesville residents can vote for new representation starting next week following the resignation of a city commissioner.

The special election became necessary when former Commissioner Gail Johnson announced her resignation Aug. 23. She said issues such as the City Manager Lee Feldman’s retention and the city’s lack of commitment to gender and racial equity led to her decision to resign.

For years, Johnson was known for advocating for the interests of historically Black neighborhoods in Gainesville. Some of her most notable achievements include proposing a moratorium on development in East Gainesville and heading the effort to challenge Gov. Ron DeSantis’ anti-riot law with a lawsuit.

Now, a special election candidate will take over the remainder of Johnson’s term until 2024.

Early voting for the special election begins Nov. 12 and ends Nov. 14, and registered Gainesville residents can vote at the Alachua Supervisor of Elections Office or the Millhopper Branch Library from 9 a.m. to 6 p.m.

On election day, Nov. 16, registered voters can go to their designated precincts with a piece of identification that includes their signature and picture.

Howland moved to Gainesville with his wife to attend UF, where he earned a history degree in 2009. They stayed in Gainesville for 13 years until moving to Washington, D.C., for work in solar power projects. They moved back to Gainesville last year after their work went remote.

“I love this city,” he said. “I would not have moved back if this was not the community that I wanted to live in.”

During the 13 years he’s lived in Gainesville, he was a public school teacher at Westwood Middle School and coached basketball at several public high schools. He also started Youth Combine, a nonprofit organization in Gainesville focused on childhood sports. Through the nonprofit, Howland collaborated with Alachua County Public Schools, UF and Gainesville’s Parks and Recreation division.

He said his fresh perspective sets him apart from the other candidates.

“I know the city very well,” he said. “I have not been a political operative in this city for decades; I’ve been a resident and involved in the city. So, I feel like I have a pretty good pulse of what people in this city want.”

Howland said his previous jobs in Gainesville aren’t a far jump from working as a city commissioner: in every instance, he worked to serve people.

Howland’s goal is to get back to the basics of local government — focusing on utility rates, road repair, waste collection, police, firefighters and other things that keep the city running.

“I want to play a role in shaping the city that we all know and love,” he said. “But most importantly, I felt like the city was ready for a message like mine.”

Energy production and utility rates are at the top of his focuses, he said. Utility rate increases disproportionately affect low-income and fixed-income residents, he said, and the city needs to get a grip on rates. Additionally, pursuing clean, renewable energy is important so the city can have a role in climate change management, he said.

Howland said he is also focusing on Gainesville’s streets, and he supports slowing traffic for pedestrians and bicycles, which would make Gainesville a safer place for people who choose to walk or bike around town.

“We all know that colorful, awesome, artsy Gainesville that we all love,” he said. “So let’s see more of that in our development.”

Stalemates, arguments and individual ideologies are weighing the city down, Howland said. His goal, if elected, is to get work done rather than focus on personal agendas, he said.

Chestnut said she has a record of getting things done, and she wants to bring that back to Gainesville. She believes there is a communication error between the City Commission and the charter officers, which was part of what led to the resignations in the city.

Improving equity in the city includes listening to citizens, Chestnut said, and this requires making City Hall a welcoming place for citizen engagement. She suggested bringing back citizen advisory boards and moving meetings from City Hall to the community.

“I want to be a voice for the citizens,” Chestnut said. “We have a void now. Citizens are not invited to be engaged, and they’re not listened to.”

Protecting neighborhoods, especially Gainesville’s traditional Black neighborhoods, is one main focus on Chestnut’s platform. She said she wants to fight for neighborhood preservation against gentrification because homes are the largest financial investments people make, leaving a legacy behind for their children.

“Neighborhoods are the backbone of the city,” Chestnut said.

Chestnut’s other concerns include reducing violence, protecting the environment and increasing energy efficiency for low-income citizens. Above all, her goal is to work together with the community for a better Gainesville.

Henry served as a city commissioner in 2006, but ever since, he’s been an active member of the Gainesville community through UF’s City of Gainesville Alliance Committee, the Neighborhood Housing and Development Board of Directors, the Alachua County Library Trustee Board and other boards.

“I’m a native of Gainesville, and I love my city,” he said. “But I feel that we have not really made our city a city that’s inviting to all.”

To fix these issues, Henry said he wants to increase economic growth by supporting trade-based jobs like plumbing and construction work. Henry suggested adding classes that teach those skills to local schools.

“School, to me, is the first line of defense in preparing future young employees to be marketable once they hit the job market,” Henry said. “Government can’t do everything, but we can partner with different entities to bring about change.”

Henry also aims to tackle equity issues by ensuring the city hires a range of people who look like they make up the city. Gainesville Regional Utilities has done a great job hiring minorities in authority positions, he said, which is something the city could learn from.

The city also needs to increase interactions with minority businesses, he said, because now it’s hard for those businesses to get contracts with the city.

Henry’s other goals also include lowering GRU rates through looking at the city’s budget and investing in East Gainesville and the downtown area.

He said Commissioner Johnson’s resignation was surprising, but it shows how the current commission is dysfunctional due to low morale among employees and lack of leadership from the Commission.

The city needs to communicate that it appreciates its workers, he said, because having a supportive employer makes productive employees. Henry said he’d be a good match for the commission because he’s a good listener and will have a short learning curve due to past experience.

“I’ve seen Gainesville grow up from the dirt roads to where we are now,” he said. “I don’t think anybody else that is running has that kind of knowledge of our city.”

“What’s the difference with me?” Ingle said. “I’m the newcomer that’s more eager to get things back rolling again.”

As Ingle approaches retirement from a career in software engineering and programming engineering, the Gainesville City Commissioner At-Large Seat B candidate said his experience has wired him to solve problems and find solutions. He has always had an interest in public office and serving the public, he said. With his past employment, he said he wants to put his skills to the test.

Ingle wants Gainesville residents to know he will bring his forward-thinking and open heart to understand the community’s interests and concerns, according to his candidate statement.

“We don’t need quitters in government,” Ingle said. “It’s a public service, and you have to stick it out.”

Ingle believes the work culture among the city must be changed, and he said with a new candidate like himself, he believes he can bring a sense of well-being. If elected, he said he wants to assure the commission staff and other city employees they will not be micromanaged.

In Ingle’s candidate statement, he discussed bringing accountability and transparency to the position, believes honesty and reliability are essential in getting people to trust their elected officials and pledged to bring this to the position if elected.

Ingle said he would work on planning better for meetings and make operations run more smoothly to ensure the public that they are getting work done. He wants voters to know he will advocate for them during commission meetings and that he supports programs that benefit residents.

For too long, Ingle said he has witnessed a lack of attention to Gainesville’s most vulnerable citizens, which has been a motivating force for him to run.

On Ingle’s website, you can track his campaign trail progress, see his financial reports, read questions he has answered from voters and view the main issues he would like to focus on, like affordable housing, if he is elected.

Kaimowitz is a candidate for city commissioner for the third time after running for the at-large seat in previous elections. He plans on running for a fourth time in the next election.

Kaimowitz said his reason for running is to “revive Gainesville as the first butterfly city.”

The candidate described a fascist government that he wishes to stop, which is why he will run again in 2022. He believes the current nature of the city gives no say to UF students and has created a lopsided town, he said.

Despite being the only candidate to run against Johnson in the spring, he doesn’t consider himself a serious candidate this time around. He hasn’t raised any money as of Sunday evening. Instead, Kaimowitz said he supports Scherwin Henry, another candidate in the election and that it’s imperative that an African American person is elected.

“I have no interest in being elected this year,” Kaimowitz said.

Kaimowitz also described his disbarment as “phony” and that he is still in “good standing” and affiliated elsewhere with courts in New York and Washington, D.C. He said he officially retired from the Florida Bar Aug. 15, 2016, but the disbarment occurred Dec. 1, 2017.

The former lawyer, journalist and candidate currently has two lawsuits: one against The Alligator and the other against the city of Gainesville. 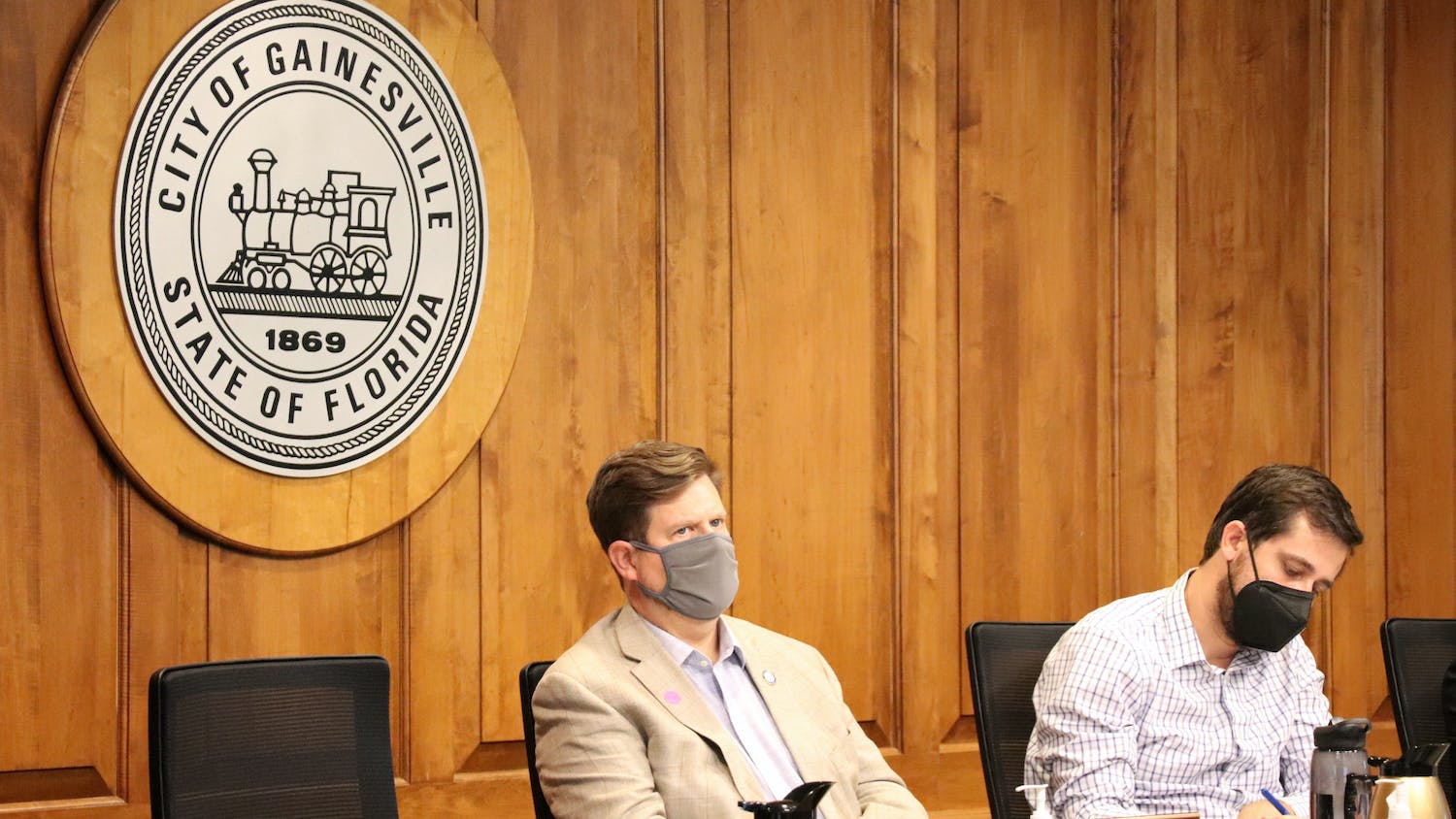