Skip to Content, Navigation, or Footer.
Donate Now
We inform. You decide.
Wednesday, December 07, 2022
THE AVENUE

In 2011, when 53-year-old Gainesville artist Tom Miller set out on a performance in which he’d ascend through academia, earn the title of professor of theatre, then quit, he didn’t foresee several things that ended up happening.

For one, he didn’t know it would take him 10 years rather than the planned seven. He didn’t know he would complete his Master of Fine Arts degree at Maharishi International University, whose curriculum is centered around the practice of transcendental meditation.

In maybe the performance’s biggest surprise, he didn’t know it would culminate neatly in the creation of a screenplay that’s now been optioned to be made into a Hollywood film.

“I have a whole brand new way of doing acting,” he said. “And that is to actually do the thing that you’re acting in real life.”

“Elmer’s Saucer,” written over a one-year period, follows a retired artist named Elmer Burns who sees a flying saucer in the small town he lives in. His estranged brother is a realtor who’s forced to reconnect with Elmer and confront their relationship through this discovery.

The screenplay is the last of three that Miller completed as a part of the David Lynch MFA Program at Maharishi International University. The program allows students like Miller access to the writers of iconic shows like The Sopranos and Mad Men, as well as video calls with David Lynch from his studio in Los Angeles.

The first semester of the school year was spent writing the story with the help of mentor Adam Nadler, who at the time, was an editor at Vanity Fair. The second semester consisted of extensive rewrites with another mentor named Matthew Kalil.

In addition to classes about screenwriting and transcendental meditation, Miller and his classmates learned how to get their screenplays in front of the right producers using several different methods, one of them being the screenplay listing service InkTip, which matches reputable producers with the scripts they’re looking for.

Producers Michael Caissie and Clayton Turnage partnered with InkTip to pair five filmmakers with five writers. Miller’s partnership is with director Agata Alexander, who Miller can’t say enough about. According to Miller, Alexander said the script found her rather than vice versa, and that she thought the two of them had a great opportunity to make something truly special within the sci-fi genre.

The film is tentatively scheduled to be released sometime next year. All five films in the partnership will have small casts and require a limited number of locations, which helps mitigate the risk of spreading COVID-19. Miller said Hollywood is cracking down on how productions are run to make sure people stay as safe as possible.

“If you make a cup of coffee the wrong way, they can close your whole production down,” he said.

Alan Bushnell, 61, is the owner of Hardback Cafe in Gainesville. He’s known Miller since the late ‘80s, though it was the early ‘90s when Miller performed at Hardback regularly as a member of the local band NDolphin, in addition to doing a separate variety show.

From the beginning, Bushnell said he wanted to provide artists a place to work without caveats. Miller has capitalized on this freedom, whether it be emceeing punk festivals or doing all manner of different performances at the Hardback, Bushnell’s favorite being his two-hour staring session at Ted Cruz’s mouth in 2016.

In recent months, Bushnell has tried to do his part to keep the music and arts scene in Gainesville alive. Unable to have shows inside, Hardback adapted into a drive-thru market for community members. It’s also been experimenting with different ways of putting on performances. On the Fourth of July, several bands played inside the venue while about twenty people watched outside on a big screen. Miller has been doing his weekly “Tabernacle of Hedonism” show virtually as well.

It’s been difficult to stay afloat, though. Even with tremendous community support, Bushnell said that nothing can really replace the consistent income that comes with having bands play every weekend. Bushnell is asking for donations through GoFundMe and is selling $2 coffee to raise funds.

Considering Tom Miller’s screenplay, Bushnell thinks back to others who have become famous out of Gainesville, only to do nothing to help out local artists once they had the resources to. Bushnell said that if Miller’s work brings some notoriety to Gainesville, he’ll make sure that it benefits other artists and musicians in the scene who need it.

“I consider him our Andy Warhol,” Bushnell said.

Miller said his screenplay is about embracing ambiguity and enjoying the questions more than the answers. He uses the example of a magic show — the wonder of the performance contrasted against the disappointment of learning how it was pulled off. In today’s political and social climate, Miller said that things people took for granted as reality are slowly shifting beneath their feet.

In the face of this, Miller said that the feelings of intuitiveness and acceptance that transcendental meditation bring help him create from a pure place, through no other motive than to see his ideas through to completion.

He’s spent years before on ideas that, when created, had little to no impact. However, the idea for his recent “Corona No-Show” took exactly 3 minutes to conceptualize, and gathered attention from Gainesville citizens, press and even Mayor Lauren Poe.

This, to Miller, was a perfect example of why the potential audience of a piece of art shouldn’t be taken into account while it’s being created — there’s no way to truly know what its impact will be. He said that “Elmer’s Saucer” was the first thing he had worked on this extensively to have such a satisfying conclusion.

“That’s how I feel about writing and storytelling,” he said. “That it’s a life and death proposition. You can’t think of an audience when you’re thinking about life and death.”

Tom Miller on the campus of Maharishi International University, where he completed his Master of Fine Arts degree. 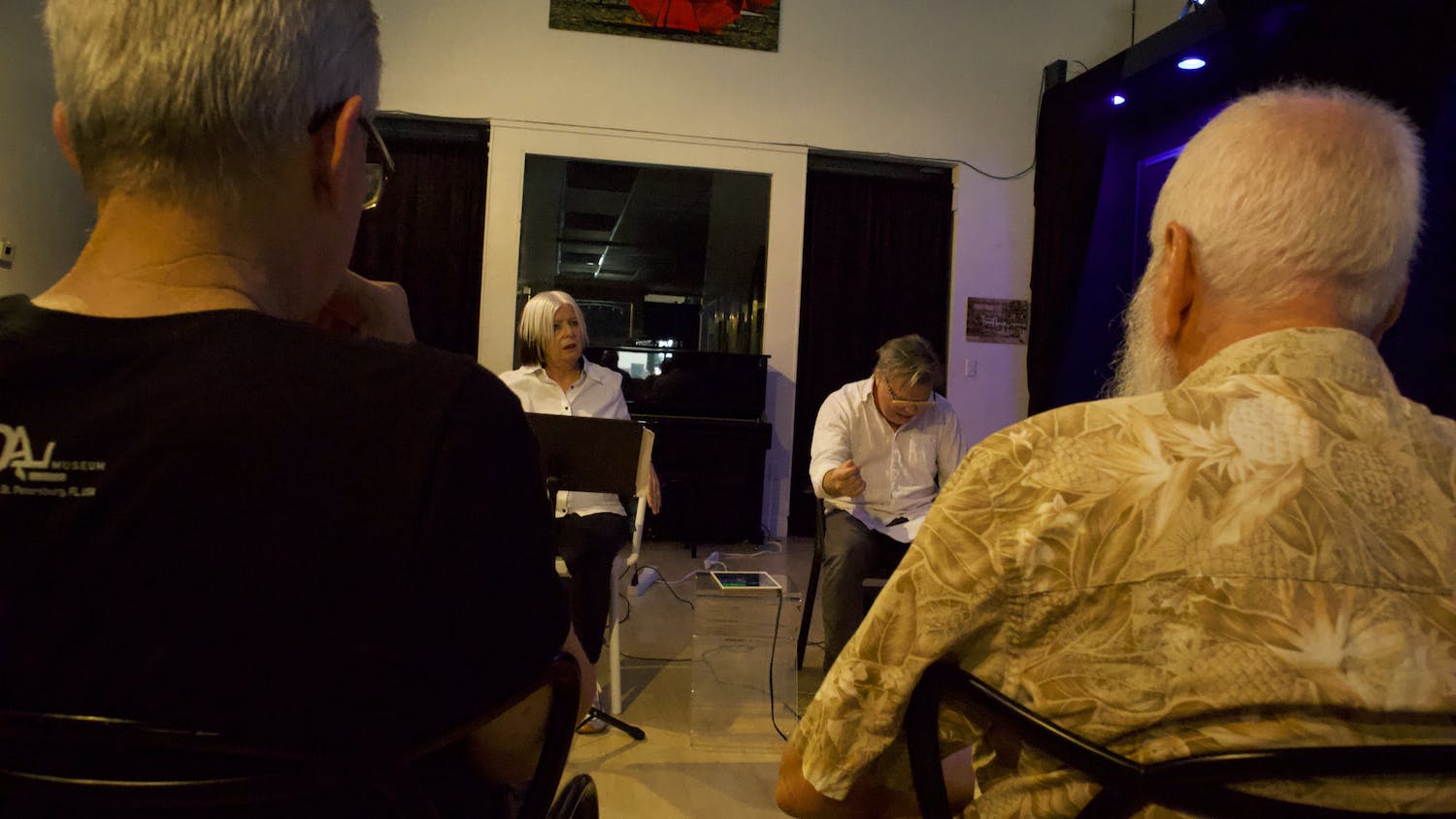 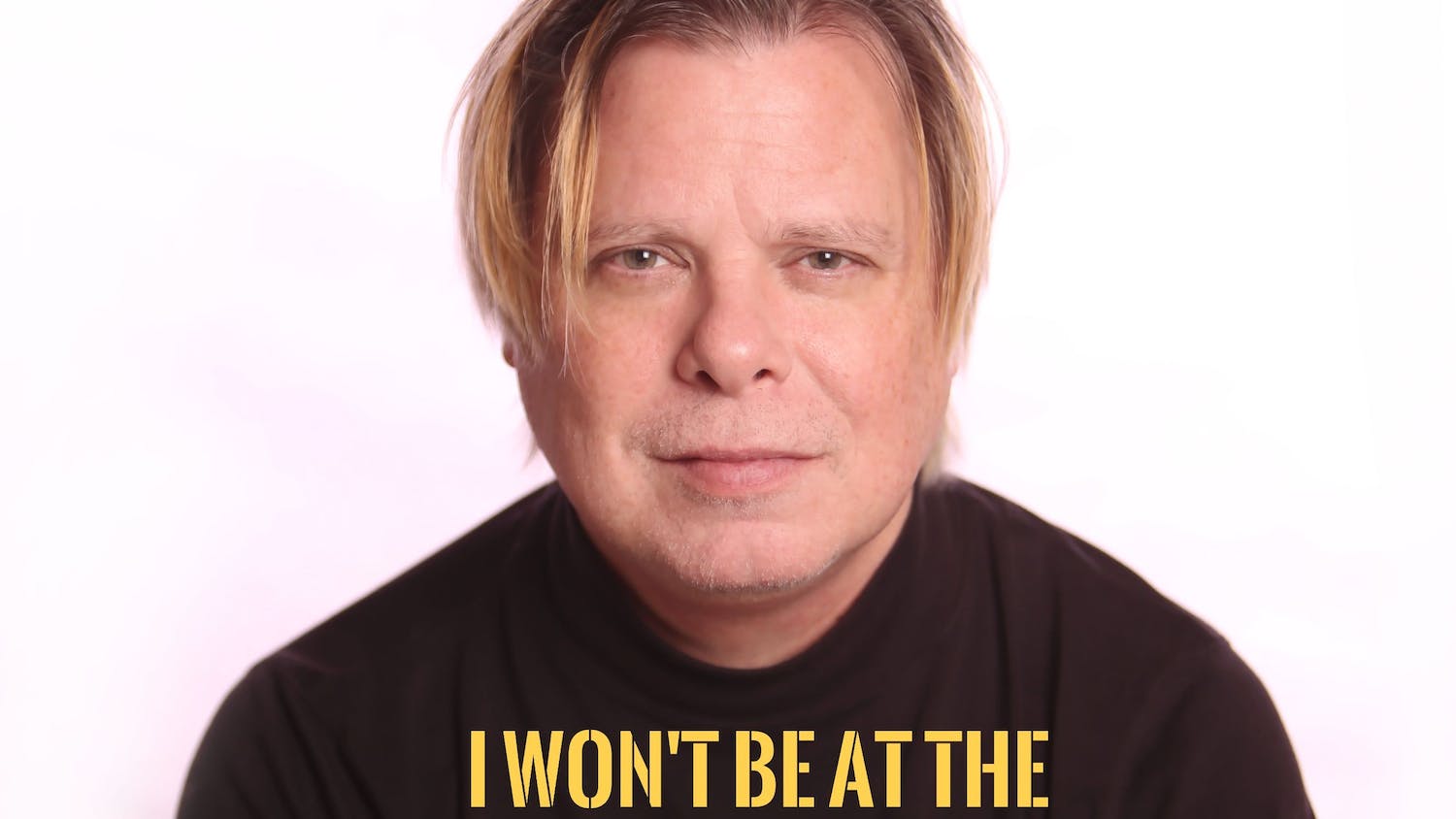