The superintendent of Alachua County Public Schools is resigning effective June 30 after a series of negative evaluations and community pressure.

Karen Clarke, 51, sent in her resignation after poor evaluations from two board members in June and a new board member, Diyonne McGraw, was elected in August.

Education activists have also called Clarke’s leadership ineffective and are demanding changes, such as further addressing the achievement gap between Black and white students in the district.

A special board meeting at 7 p.m. on Nov. 30 will discuss the superintendent’s contract, according to the agenda.

In Florida, 41 of 67 school districts elect a superintendent, while the other 26, including ACPS, appoint them. With the COVID-19 pandemic and potential rezoning in the district, she said board members should have full confidence in their leader.

Clarke announced her departure three-and-a-half years after being appointed as superintendent and almost three decades working in ACPS in a Nov. 10 letter to the school board. She wrote that the board inducted Nov. 3 should have the opportunity to select a new superintendent.

In the letter, Clarke celebrated the district’s accomplishments, such as gaining voter approval for the Half-Cent for Schools sales tax initiative, which created a fund through a local sales tax for facilities improvements and the rebuilding and remodeling of schools.

She said she resigned effective June because she didn’t believe it would be fair to leave in the middle of a school year amid a pandemic. It also gives the board plenty of time to fill the position, she added.

“It’s a difficult decision to make when you’ve been a part of a district for so long, both as a student and as an employee of the district,” she said.

Alachua County has some of the widest disparities in education outcomes between Black and white students in the state. The student body of around 30,000 is about 30% Black and about 80% of teachers are white, according to the school district’s 2019-20 Equity Plan.

The superintendent, who is white, was rated on six district goals within the evaluation, which include a focus on eliminating all “D” and “F” schools, raising low test scores and implementing the district equity plan, with a focus on the achievement gap.

Lake Forest, Williams and Idylwild Elementary schools have “D” ratings, though there are no “F” schools. There are also continuing inequities. Alachua County, according to the district equity plan, continues to have the widest achievement gap in the state between Black and white students.

In the evaluations, Eileen Roy, who recently retired from her position on the school board, Gunnar Paulson and Robert Hyatt all rated Clarke as highly effective. All of them are white.

However, Tina Certain and Leanetta McNealy, who are Black, rated her performance as unsatisfactory.

The board has faced criticism for not making enough change, particularly for students of color.

All members of the current school board were contacted via email for an interview, but only Certain, Hyatt and McNealy responded by time of publication.

Certain has been on the board for two years. She has a background in accounting, but she, her husband and her children are products of the ACPS system.

“All of us, the school board as well as the superintendent,” she said. “Wwe are all fierce supporters of public education. We just have different visions and viewpoints on how to get there.”

While Certain has a collegial relationship with Clarke, she said she wanted to see more aggressive action, particularly with low-performing schools and students.

“I felt my concerns were being ignored,” Certain said.

Leanetta McNealy, a former teacher and principal of almost 40 years, was first elected to the board in 2012.

“I wish her well with whatever her future endeavors might be,” McNealy said. “Just know it was surprising to see the notification about her intent to resign.”

Although she supported other candidates for superintendent positions during Clarke’s 2017 appointment, McNealy said she has much respect for the superintendent and always collaborated with her to improve the school system.

“One thing I can say is that we learned to disagree agreeably, and I think that's important,” McNealy said.

School Board Member Hyatt said he believes Clarke has done a “superb” job under challenging circumstances. While he’s disappointed she’s leaving, he said he’s not surprised because of the negative June evaluations.

Hyatt praised Clarke for the district’s high graduation rate of about 88.5% and for her support for the arts through efforts like the One Mill, which first passed in 2008 and is up for a vote every four years and helps fund things like magnet programs and the arts. He noted that UF has come to the district for advice on Hyflex.

“She’s one of the best people that I’ve ever worked with,” he said. “I taught for 38 years, and I’ve seen my share of principals and superintendents, and she’s right up there.”

Clarke said she was part of the ACPS system as a child, attending Glen Springs Elementary, Westwood Middle and Gainesville High. She decided to pursue education after attending Santa Fe Community College and graduating from UF.

Clarke began teaching in ACPS in 1992, a year after starting her career, at what was then Newberry Junior-Senior High School. She taught reading, English, math, science and social studies over the years.

“When you move into administration, you’re not as much on the front line anymore,” she said. “You know, you’re not in the classroom every day, but the decisions you make are impacting what goes on in those classrooms.”

“There’s a lot of different things that over time have been good for our kids,” she said. “I’m happy to have been a part of that in the role of superintendent or in different roles.”

Clarke “needs to go” before the end of 2020, said Armando Grundy-Gomes, an East Gainesville resident and graduate student.

He attends community meetings, including those for the school board, and said he has expressed concerns about Clarke during the last two years.

People in the Alachua County Community have expressed hope with the historic make-up on the school board, and their chance to foster change. For the first time, three Black women are on the board.

However, the three Black women on the school board aren’t a “magic wand” to fix the issues in the school district alone, Grundy-Gomes said.

“We are all in this together,” he said.

Chanae Jackson, a local parent and community organizer, called for Clarke to resign at an Oct. 20 education event. At the Nov. 3 school board meeting, Jackson called for effective leadership once again.

“Now, we are a district that is in trouble in many ways,” she said. “Because of this leadership, we’re looking at budget shortfalls. We’re looking at lack of staff, looking at a lack of trust and very low morale.”

Clarke said she has always tried to be accessible and responsive to those who disagree with her. She noted that the district's first equity plan was developed during her tenure and added that graduation rates for African American students increased from 68% in 2017 to 80% in 2019.

While Clarke said she doesn't know what’s next, her child will continue to attend ACPS.

“So obviously, a very tough decision to make. But, you know, it was just the right one for right now,” she said. 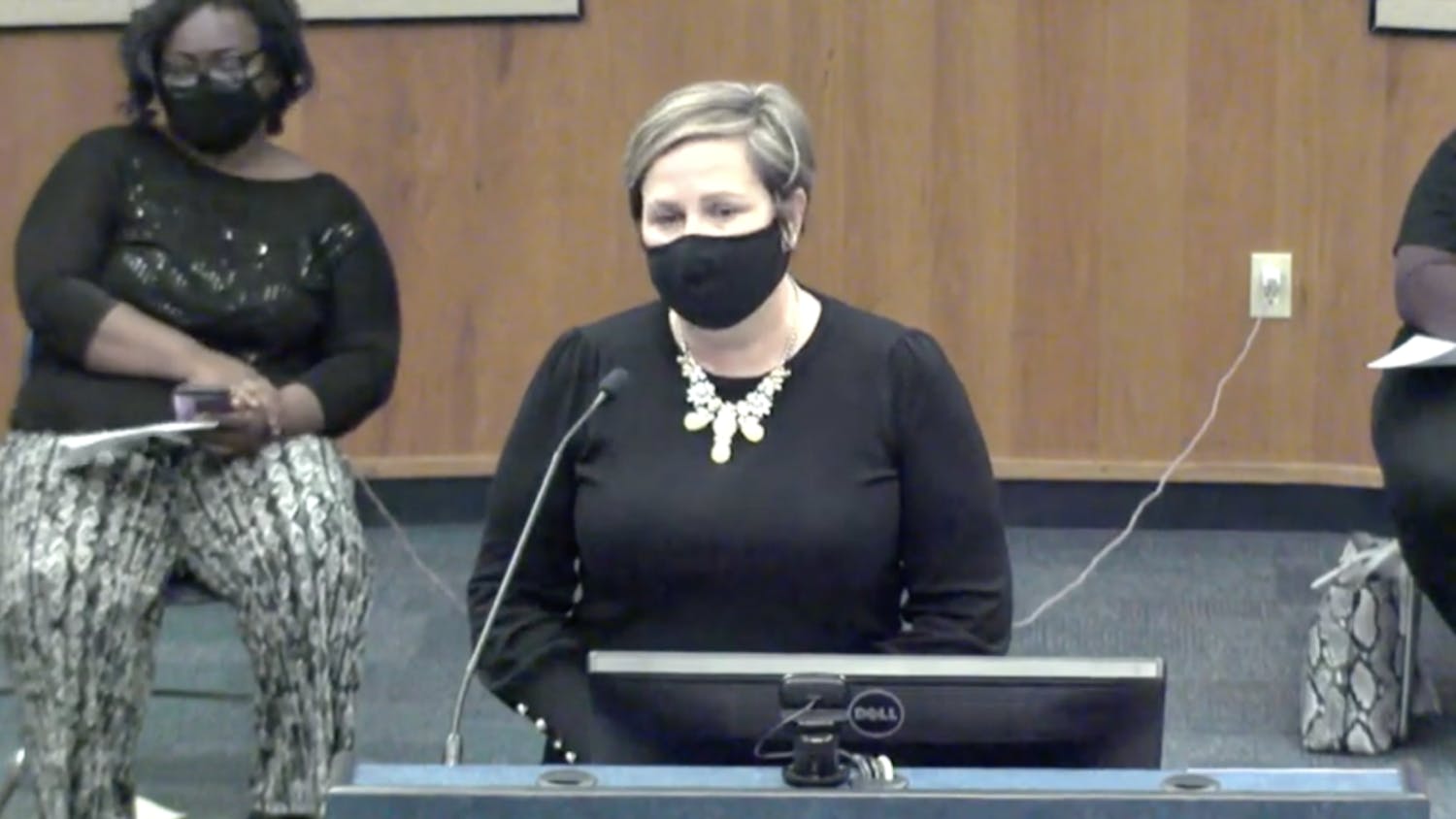