UF Student Government elections are fast approaching, and some parties are releasing their platforms for the semester.

Students can vote for 50 senators and the Executive Cabinet in SG’s Spring election on Feb. 22 and 23. Five parties are registered: The Gator Party, Change Party, Communist Party, Keg Party and Waffle House Party.

Polls will be open from 8:30 a.m. to 8:30 p.m. on election days, per SG election codes. Students who are unable to vote in-person can request absentee ballots through an online form before 5 p.m. on Wednesday, said Supervisor of Elections Alexandra Stedman.

“Voting is really just getting your voice out there,” Stedman said. “We're all students here at the university. We're all experiencing everything that's going on.”

Change and Communist parties’ general platforms feature 12 points that were released on Instagram during the last week of January.

Gator Party, Keg Party and Waffle House Party have not responded to requests for comment about the party platform.

Last election season, Gator Party won 37 seats for a total supermajority of 60 seats in the Senate. Change won 12 seats and Communist won none.

“This semester, we've put a lot of emphasis on platform points that are really going to support and enhance the lives of students,” said Change Party President Cassidy Campbell, “Things that are actually achievable through the student Senate.”

The platform focuses on points the party has developed during other semesters like shifting to 24-hour libraries, which UF administration oversees.

Some of the demands aligned with Change’s platform, such as expanding blue lights and increasing report times for sexual assault.

“Leadership underneath Change Party would be very accessible and be representative of the student body as a whole,” Adekunle said.

The Change Party will be releasing more information on platform points before the election, Campbell said.

The Communist Party was originally founded at UF as the Progressive Party by previous president Alfredo Ortiz. The party ran as Communist Party last election and won no Senate seats.

Parties were required to submit a supporting petition with 500 signatures by Feb. 1 to qualify. The Communist Party did not reach enough signatures, but eight candidates are running for Senate, said previous president, Alfredo Ortiz.

The Communist Party platform features four foundations: radical democracy, boots off necks, economic relief and social justice, each of which have three points.

The party developed points under Ortiz and finalized the platform under its current president, Aron Ali-McClory, a 19-year-old freshman studying anthropology and political science.

Under the radical democracy point, the party seeks to abolish the two-party SG system, create a union of SG employees and adhere to the demands of the UF Food Justice Coalition.

The boots off necks foundation would allow students to control UFPD’s budget, protect academic freedom and educate the student body through a mandatory course on Critical Race Theory.

Economic relief features points like student debt relief, subsidies for school supplies and creating workplace democracy, which is one of the beliefs of the Communist Party, Ortiz said.

The party wants to eliminate gendered restrooms, create an “anti-John’s committee” to protect leftist and LGBTQ+ students and assist transgender students with costs that accompany transitioning— like replacing a Gator 1 card.

“I love Lib West, but it’s a six-story building with one gender-neutral bathroom,” said Izzy Myers, a 19-year-old sophomore studying history who was the party’s executive VP candidate.

SG will announce election results at about 9:30 p.m. Feb. 23 if no run-offs are necessary.

Questions about SG elections can be directed to Stedman at elections@sg.ufl.edu. 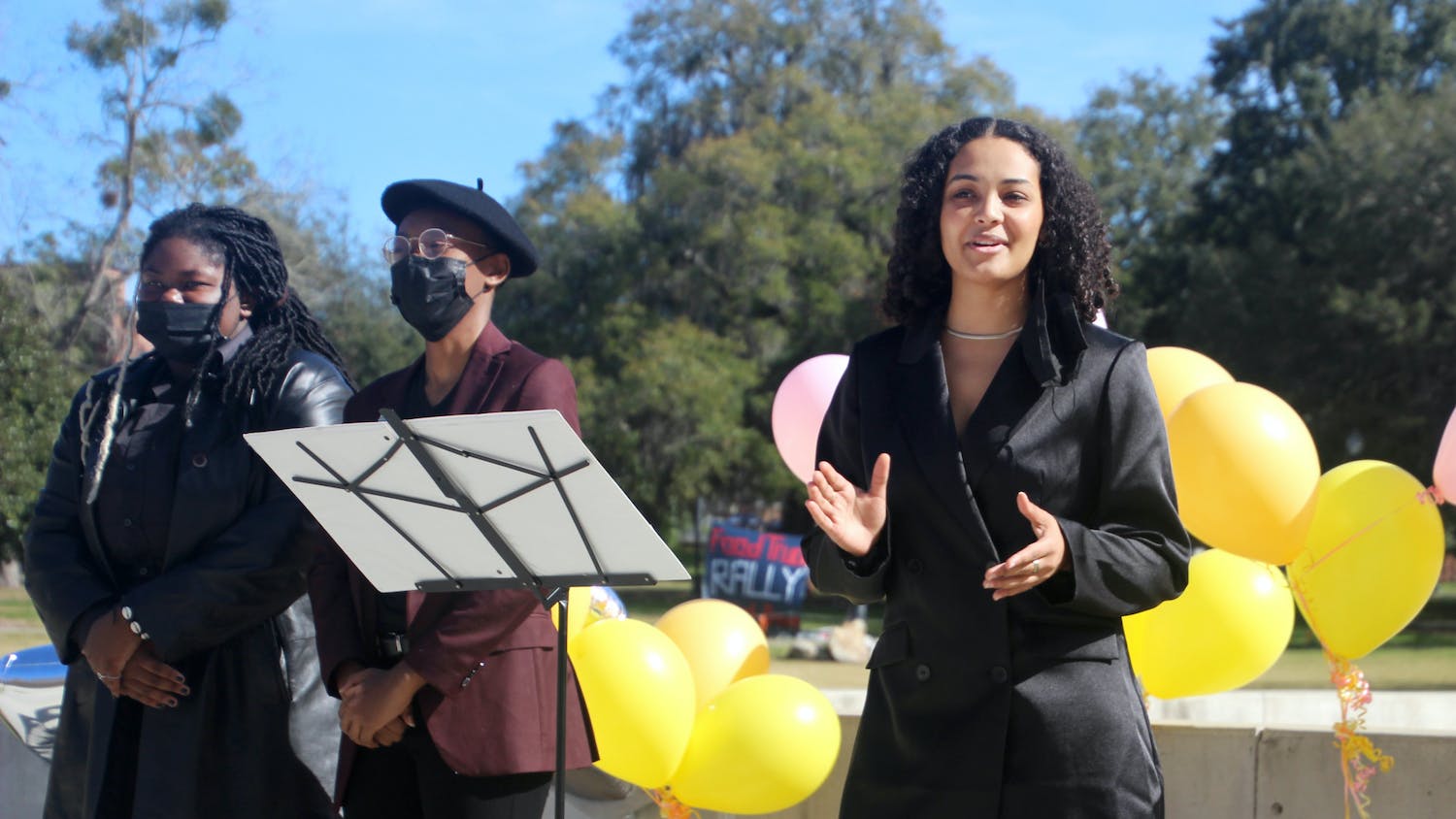